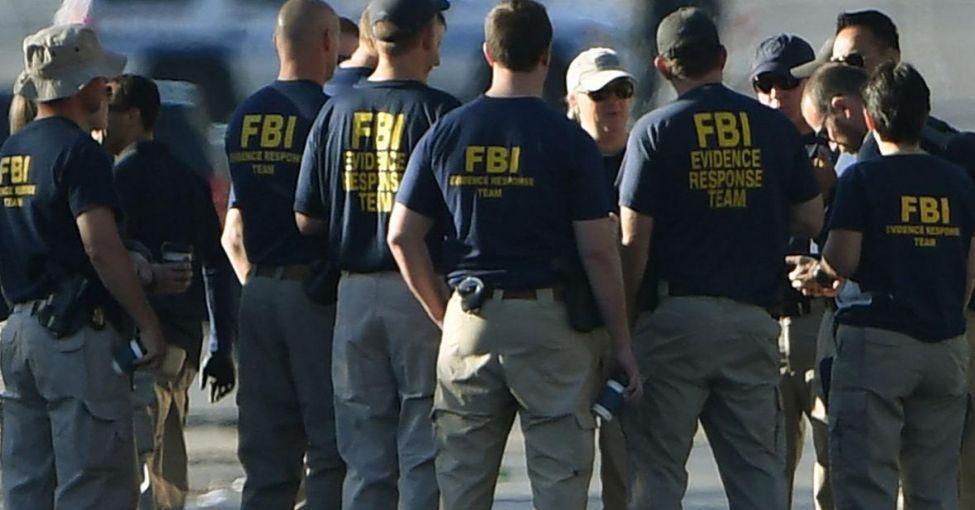 WASHINGTON - In late November 2018, just over a year before the first coronavirus case was identified in Wuhan, U.S. customs and border protection agents at Detroit Metro airport stopped a Chinese biologist with three ampoules labeled "Antibodies. ".

The biologist told the agents that a colleague in China had asked him to deliver the vials to a researcher from a U.S. institution. After examining the vials, however, the customs agents came to an alarming conclusion.

The report, written by the FBI's Directorate of Weapons of Mass Destruction Chemical and Biological Intelligence Unit (WMDD), does not provide the name of the Chinese scientist carrying the suspected SARS and MERS samples, or the intended recipient in the United States. , but the FBI concluded that the incident and two other cases mentioned in the report were part of an alarming pattern. 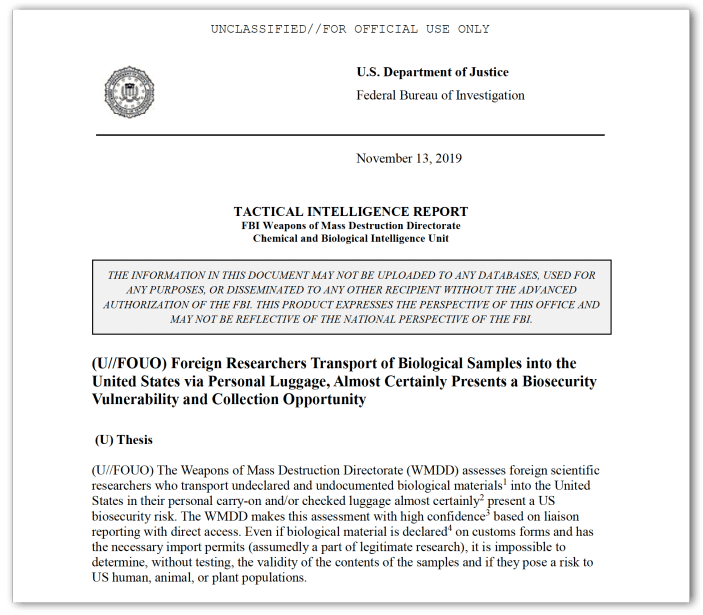 "The Weapons of Mass Destruction Directorate assesses foreign scientific researchers who carry undeclared and undocumented biological materials in the United States in their cabin baggage and / or checked baggage almost certainly pose a risk to biosafety in the United States.", reads the report. "The WMDD carries out this evaluation with great confidence based on direct access link relationships."

The report, published more than two months before the World Health Organization learned of a group of pneumonia cases in Wuhan that turned out to be COVID-19, appears to be part of a larger FBI concern about involvement. of China in scientific research in the United States. Although the report refers extensively to foreign researchers, all three cases cited concern Chinese citizens.

In the case of the suspected SARS and MERS vials, the intelligence report cites another classified document which is marked as "FISA" in the sense that it contains information collected under the Foreign Intelligence Surveillance Act. Another case mentioned in the report appeared to involve strains of influenza and one third were suspected of E. coli. 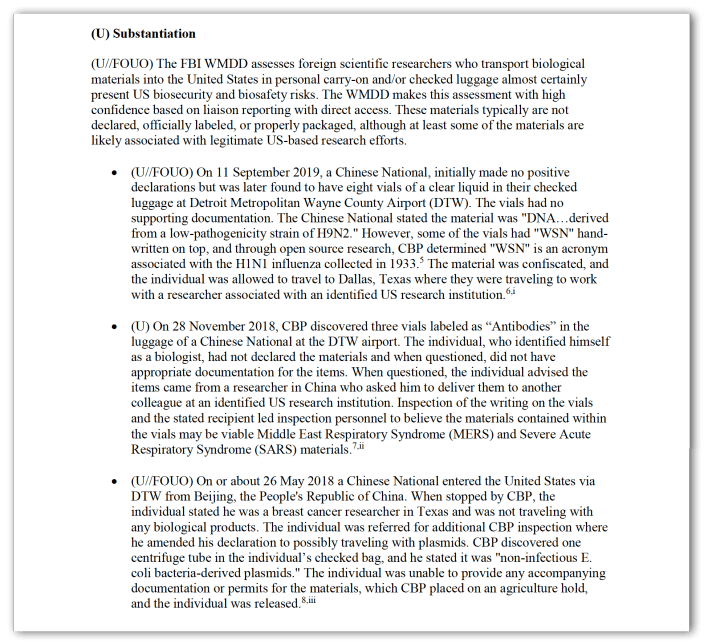 The FBI does not say exactly what type of biosecurity risk these cases could present, but Raina MacIntyre, a professor of global biosecurity at the University of New South Wales in Sydney, said the FBI appears to be concerned with dual-use research. which would be used for bioterrorism. And if the illicit samples mentioned in the report were brought to the United States, he says, the traffic will likely be both ways.

General Robert Spalding, who worked on China-related issues in the National Security Council under the Trump administration, said that "there is a threat" posed by Chinese citizens carrying biological samples, said that: "likely the courier ... would be someone who was not aware," making it difficult to determine the intent. "Some may probably be intentional, to test our ability to identify and intercept. Others may be opportunists."

The FBI report refers to both biosafety, and in gender refers to the intentional use of pathogens, as for bioterrorism, both to biosecurity, which covers accidental release. The FBI declined to comment on the report.

Concerns about Chinese biosecurity are not new. For example, the SARS epidemic in 2003 was followed by numerous episodes of infections caused by laboratory accidents, including eight cases resulting from mismanagement at the Chinese Institute of Virology in Beijing.

"There have been cases in the past where a variant of a flu pandemic species had escaped a laboratory due to mismanagement," said Elsa Kania, an adjunct member of the Center for a New American Security.

But the problem isn't limited to Chinese researchers, although those cases have been important, he continued. "It certainly is a risk for biosecurity when someone transports materials clandestine because ... there have been several incidents in which this has occurred with researchers of various nationalities." 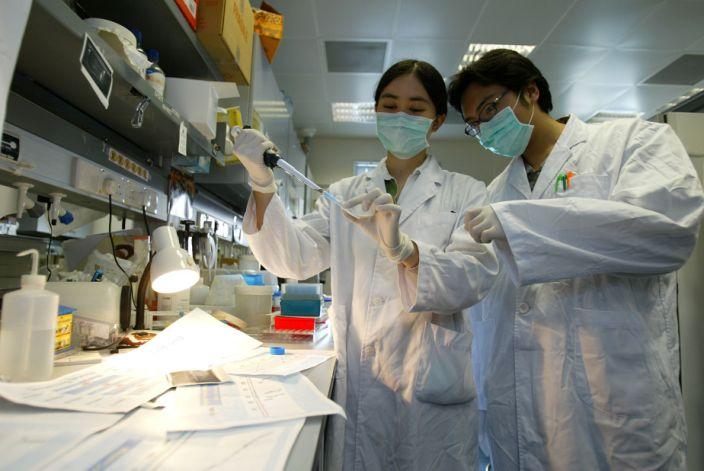 Concerns about China's non-compliance with biosafety precautions have a long history, but the coronavirus pandemic is likely to exacerbate tensions between Beijing and Washington. The epidemic comes as the growing tensions in US-China relations on issues ranging from trade to espionage.

Andrew Weber, who worked during the Obama administration as assistant secretary of defense for nuclear, chemical and biological defense programs, said that the relationship with China in the life sciences has deteriorated in recent years.

“After SARS, when China needed technical assistance, it had a strong relationship with the [Centers for Disease Control and Prevention]. They were transparent, because they realized that covering an epidemic cost him dearly, "said Weber, now senior member of the Council on Strategic Risks." In recent years they have strengthened, making international cooperation more difficult. "

In recent weeks, however, these tensions have rapidly increased, with President Trump calling COVID-19 "the Chinese virus", while Beijing has in turn promoted conspiracy theories by stating that the virus originated in a weapons laboratory of United States.

Scientists have been firmly convinced that the virus is not a weapon, neither from the United States nor from China. "There is no basis for suspecting that it is a laboratory construct," says Richard Ebright, professor of chemical biology at Rutgers University. "It has none of the expected signatures that would be present for deliberate construction."

However, Ebright does not rule out the possibility that the spread of the virus started with poor biosecurity in China. A fundamental theory is that the virus has gone from wildlife to humans. Some researchers speculate that this happened in an animal market where exotic species are being sold as food. But Ebright also notes that these wildlife viruses are collected in laboratories, including in Wuhan. "Therefore, it is also possible that this virus entered the human population through an accidental infection by a laboratory worker who collects it in the field or an accident by a laboratory worker who characterizes the sample in a laboratory."

Regardless of the coronavirus, the FBI's focus on Chinese biosecurity appears to be part of the long-standing suspicion by the United States government regarding China's involvement in the biological sciences. Numerous recent high-profile cases from the Justice Department involving the export of sensitive technologies have involved Chinese scientists or people with alleged ties to the Chinese government.

Above all, the Justice Department in January announced accusations against Charles Lieber, president of the Harvard department of chemistry and chemical biology, for hiding ties to the Chinese government. "It's a clear case of conflict of interest and, unfortunately, it's not an isolated incident," said FBI Special Agent Joseph R. Bonavolonta, head of the Boston field office, in announcing the allegations. . 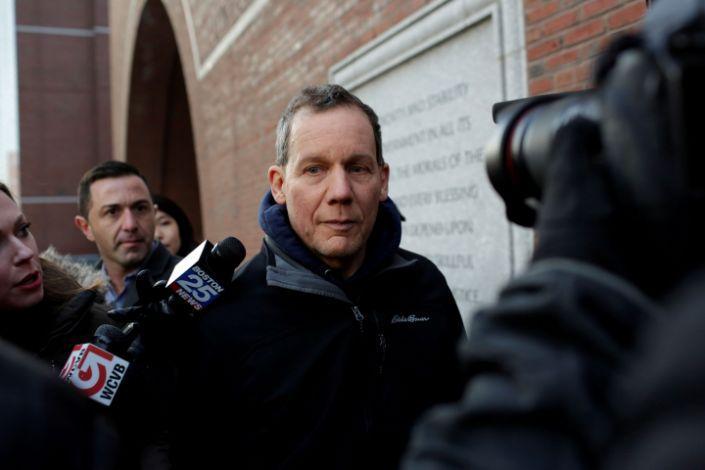 But the FBI's focus on China and the Chinese aspects are also raising concerns among some academics. "I'm afraid he says the trend of national security is to profile people of Chinese descent," said Nicholas Evans, assistant professor at the University of Massachusetts Lowell, who specializes in medical ethics. "It's not just racist, it's bad practice. The FBI and other attempts at profiling intelligence and law enforcement have often been harmful without making us safer."

Evans also questioned the FBI's focus on topics that carried biological samples as a single threat. He pointed to earlier examples, such as an American laboratory in Maine that was fined more than a decade ago for importing bird flu and highly pathogenic viruses from Saudi Arabia.

"The FBI says it is impossible to accurately determine the contents of the samples, even if declared under the applicable import laws" ... "That's true. But I'm skeptical about the degree to which this particular behavior adds risks associated with the given security. that there are many other ways to bring biological agents into the country. "

Yanzhong Huang, a senior member of the Council on Foreign Relations, said that it has been true that China has long had gaps in its biosecurity regulations. "That's why [Chinese President] Xi [Jinping] spoke in February about strengthening biosecurity and biosecurity legislation."

That story has already encouraged rumors such as the idea that coronavirus originated as a biological weapon.

Now, as relations between China and the United States deteriorate, Huang predicts that collaboration in biological research will become even more difficult, reversing decades of cooperation. "I often argue that the United States' commitment to China is the most successful in the public health field." This cooperation also survived the difficult period after the 1989 Tiananmen Square protest.

Now, however, these relations are being reduced to the object of hostilities between the two countries.