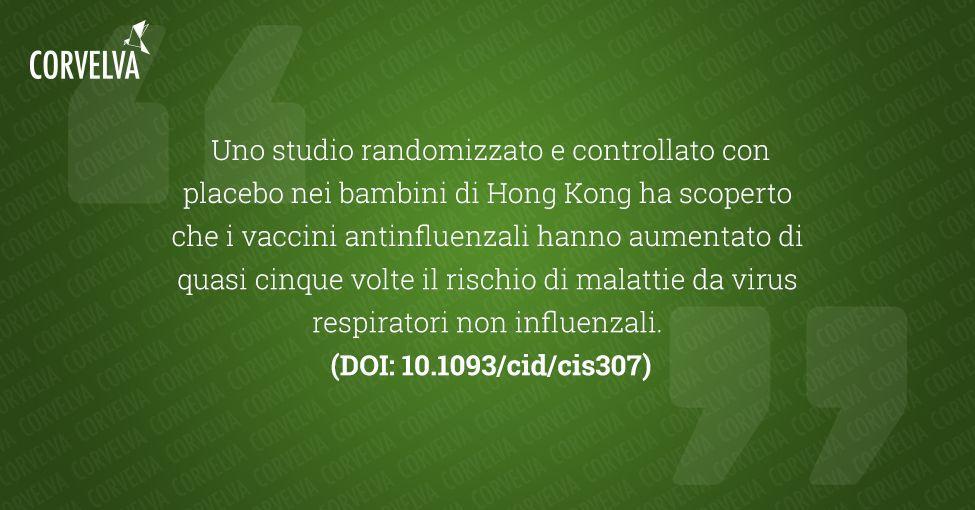 We randomized 115 children to the inactivated trivalent influenza vaccine (TIV) or placebo. Over the next 9 months, TIV recipients had an increased risk of virologically confirmed non-influenza infections (relative risk: 4,40; 95% confidence interval: 1,31-14,8). By being protected against the flu, TIV recipients may not have temporary nonspecific immunity that protects against other respiratory viruses.

METHODS: Participant recruitment and follow-up
In a double-blind, randomized controlled trial, we randomly assigned children 6-15 years of age to receive the 2008-2009 inactivated seasonal trivalent influenza vaccine (TIV; 0,5 mL Vaxigrip; Sanofi Pasteur) or placebo [16]. Serum samples were obtained from participants prior to vaccination from November to December 2008, one month after vaccination, mid-study around April 2009, and at the end of the study from August to October 2009. Participants were followed up for disease through symptom diaries and phone calls, and reports of illness in any family member, they initiated home visits during which nasal and throat swab (NTS) samples were collected from all family members. We defined the follow-up period for each participant starting from 14 days after receiving TIV or placebo until mid-study serum sample collection as the winter season and from mid-study sample collection until obtaining of the final serum sample as the summer season.

Written informed consent was obtained for all participants by proxy from parents or legal guardians, with additional written consent from those aged ≥8 years. The study protocol was approved by the Institutional Review Board of the University of Hong Kong.
Laboratory methods

NTS were tested for 19 respiratory viruses from the ResPlex II Plus multiplex matrix [17-19] and for influenza A and B by reverse transcription polymerase chain reaction (RT-PCR) [16, 20] (Supplementary Appendix ). We refer to infections determined by these tests as "confirmed" infections. Information on influenza serology is provided in the Supplementary Appendix.
Statistic analysis

We defined acute respiratory disease (ARI) determined by self-reported signs and symptoms as ≥2 of the following signs or symptoms: body temperature ≥37,8 ° C, headache, sore throat, cough, presence of phlegm, coryza and myalgia [16]. We defined acute febrile respiratory disease (FARI) as a body temperature ≥37,8 ° C plus a cough or sore throat. Since the duration of follow-up varied between participants, we estimated the incidence rates of ARI and FARI episodes and confirmed viral infections in general and during the winter and summer seasons, and we estimated the relative risk of these episodes for the participants who received TIV versus placebo with the use of the incidence rate ratio using Poisson regression (Supplementary Appendix). All statistical analyzes were conducted using R, version 2.11.0 (R Development Core Team, Vienna, Austria). The data and syntax for reproducing these statistical analyzes are available on the website of the corresponding author.

RESULTS: Among the 115 participants who were followed up, the mean duration of follow-up was 272 days (interquartile range, 264-285 days), with no statistically significant differences in age, gender, family size, or duration of follow-up. up between TIV and placebo (Table 1). We identified 134 episodes of ARI, of which 49 met the more rigorous definition of the FARI case. Diseases occurred throughout the study period (Supplementary Appendix Figure 1). There was no statistically significant difference in the risk of ARI or FARI between participants who received TIV and those who received placebo, either during winter or summer 2009 (Table 2).