Measles outbreak in a tertiary-level hospital in Porto, Portugal, 2018: challenge in the post-eradication era 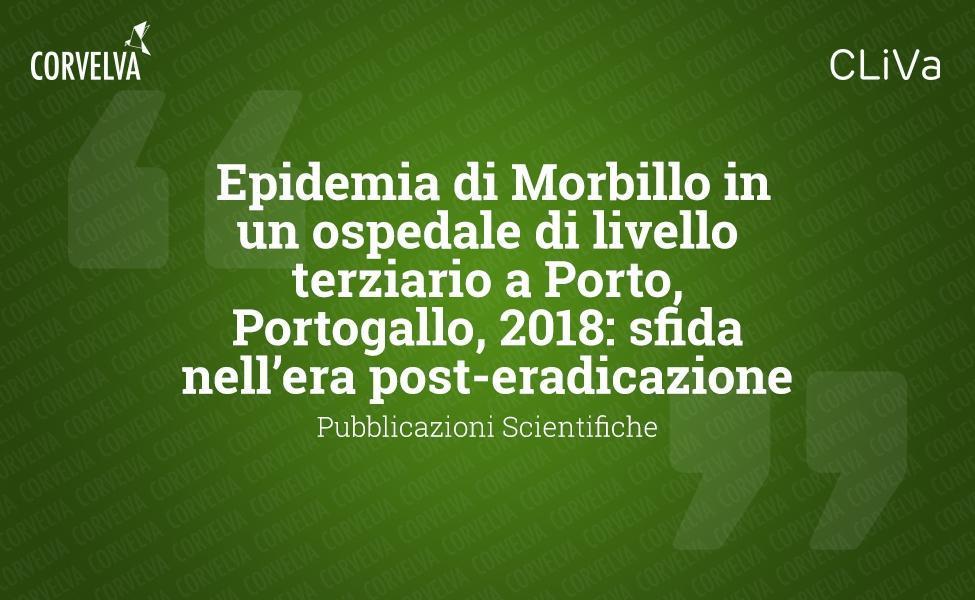 Abstract
A measles outbreak has occurred in a health institution in Porto, Portugal, since the beginning of March 2018, which has severely challenged the central hospital and the public community. By 22 April 96 cases had been confirmed, 67 among vaccinated health workers, mostly between 18 and 39 years of age. Following the identification of the first cases, control measures were quickly applied. Concurrently, other measles cases were reported in the northern regions of the country. No common epidemiological link has been identified.
A tertiary-level hospital in Porto with around 4.400 health care workers (HCW) has been affected by a measles epidemic since March 2018, the cases were mainly HCW vaccinated. Since measles is a mandatory disease to be reported in Portugal [1], the confirmation of the first cases on March 14, 2018 led to the immediate application of public health control measures. We present the first conclusions following this epidemic, highlighting the first public health actions and their short-term results.

Since March 16, the case definition has changed, after we have noticed a clinical presentation of atypical measles in different individuals. The clinical criterion included any person with maculopapular rash, or fever and one of the following three symptoms; cough, coryza, conjunctivitis.

Description of the epidemic
On March 13, the medical director of a Porto hospital reported a probable measles outbreak with 24 affected health workers (HCW) to the Regional Department of Public Health (SDR).
The local health company was advised to evaluate and manage the situation, and started an epidemiological investigation. All cases had had contact with the Adult Emergency Department (aED) and their clinical presentation included maculopapular rash, mild fever, tachycardia and headache. The national reference laboratory Dr. Ricardo Jorge, Lisbon, confirmed the first two cases on March 14th.
From 11 February to 22 April, 211 cases related to the hospital were disclosed, with 96 confirmed cases (figure).
During the same period, 405 cases were notified nationally, with 109 confirmed cases [3].
The epidemiological investigation led to the retrospective identification of the first, possibly imported, case: a young adult from a European country with the circulating measles virus that arrived in Portugal 10 days before the start of the rash. The clinical case definition was consistent and laboratory results (positive IgM) confirmed the case. Genotype B3 has been identified.
The mean age of the 211 notified cases was 33.3 (SD; 12.5), 135 cases were women. Preliminary results showed that all but one of the confirmed measles cases (n = 96) occurred in adults (> 18 years; 18-39); 60 (62.5%) were women. Among the confirmed cases 86 HCW (see table). One hospitalized patient was also affected. Of the 96 confirmed cases, 67 (69.8%) were vaccinated with 2 doses of MMR (measles mumps rubella) vaccine.
The latest confirmed case manifested the beginning of the rash on April 9th. No further cases related to this healthcare institution have been identified.

Control measures
With the aim of controlling the epidemic in the hospital, decreasing the number of secondary cases and minimizing the contagion within the healthcare institution, an Emergency Team (ERT) was set up. The team included hospital staff (the medical director, the director of the emergency department, the nurse director, the occupational medicine team, the infectious disease prevention and control team and infectious disease specialists) and the healthcare company local (local health authorities, doctors and nurses from the public health service).
The hospital emergency plan was activated and an isolation area was created to evaluate possible and probable cases in the aED (emergency department for adults). Precautionary measures have been taken to prevent airborne infection in the hospital, especially in wards with several cases. These precautions include a highly effective mobile laminar flow air particle filtering system (HEPA) and the use of surgical masks or P2 / N95 masks for healthcare professionals entering rooms with possible and probable cases. In addition, hand hygiene has been enhanced.
All cases were advised to remain in isolation for 4 days after the rash developed. The doctor's authorization to return to work was given 5 days after the onset of the rash if there were no clinical complications from measles or if the symptoms did not continue. Post-exposure prophylaxis (PEP) [4,5] (vaccine or immunoglobulin) was offered within 72 hours to healthcare professionals and patients who had come into contact with a measles case. Regional stocks of MMR vaccine and immunoglobulin have enabled timely supply of these products. Two vaccination stations were created and HCWs were advised to be vaccinated if in the past they had not received two doses of MMR or an alleged immunity due to the disease; a total of 1.132 vaccines were administered.
For each possible or probable case in healthcare personnel (HCW), the infection prevention and control team created a list of susceptible patients with whom healthcare professionals might have come in contact during their contagion period. Of over 500 identified contacts, 73 patients received the MMR vaccine and 68 were immunized with immunoglobulin for contraindications to vaccination or high risk of serious disease and vaccination complications.
Since the outbreak occurred in a university hospital, medical and nursing schools were contacted to report the outbreak. Students were advised to check their immunization status and given indications to report any symptoms that fall within the definition of measles cases immediately. Daily reports on the situation were issued to health workers employed in the university hospital.
At the community level, local health teams (from the place of residence of the cases) have investigated the cases and contacts. Control measures included verification of immunization status and PEP (post-exposure prophylaxis), as well as surveillance of symptoms. If during the case investigation the teams found some information about the hospital, they would send it to the emergency team (ERT) and the latter would manage it in the hospital environment.
At national level, the DGS was responsible, among other aspects, for promoting community engagement through short media communications, reports three times a week, and for strengthening active epidemiological surveillance by reporting to public and private sector health services. . 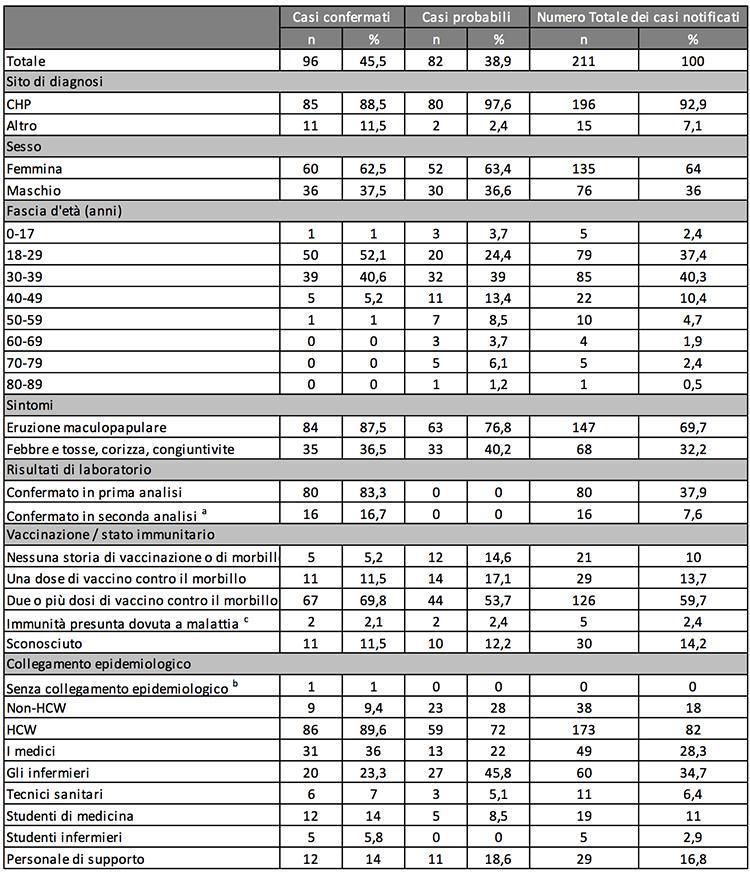 CHP: Porto hospital center; HCW: healthcare personnel
A: For cases where the first laboratory samples were negative or inconclusive, a second sample was needed to exclude the results of false negative or false positive IgM in unvaccinated individuals, through evidence of subsequent seroconversion about 10 days after the first laboratory tests.
B: Probably the primary case of the epidemic
C: Presumed immunity due to disease: previous self-certified or documented measles infection

Discussion
Globally, various efforts have been made to eradicate measles [6-8], a highly contagious communicable viral disease that has the potential to infect 75-90% of the susceptible individuals with whom it comes in contact [9] and spreads through airway contagion [10].
In Portugal, the latest outbreak occurred in 2017 following an imported case [11]. Prior to that, Portugal had 12 years without endemic measles transmission [11]. In the current epidemic, measles transmission occurred mainly in the health institution. Proactive control measures have been instituted that have helped control the epidemic and prevent more secondary cases in other institutions. Measures included notification, case isolation, a list of susceptible cases, tracking of each contact, monitoring of new cases and immunization of the susceptible population.
Vaccination or immunity acquired following the disease is considered to be safe protection against the disease [9]. Portugal is a country with a high number of MMR vaccination coverage [12] and in 2017, coverage of the MMR vaccine at the age of 5 was 96% [13]. According to the National Measles Eradication Plan [14], healthcare professionals are strongly recommended to receive two doses of MMR vaccine or to document evidence of measles infection, considering that HCWs are at a higher risk of exposure to virus. However, we are seeing epidemics involving healthcare institutions [9,15]. The frequency of cases among HCW (health workers) makes us reflect on the need to consider interventions that ensure effective protection for this category, including vaccination and measures to control and prevent contagion.
Surprisingly, the majority of cases were HCWs (healthcare professionals) of young age (18-39 years) completely vaccinated. This characteristic has also been documented in other epidemics [9,15]. The high frequency of cases among vaccinated people, probably due to the weakening of vaccine-derived immunity [15] in a situation where natural enhancement is occurring to a very limited extent, indicates the need to further investigate this problem to recommend new approaches. This is of particular importance for that part of the population at higher risk of exposure to the disease, such as healthcare professionals, and of transmission of the disease to subjects in vulnerable conditions, such as patients.
Having had the first confirmed case on March 14, 2018 and three cases started showing symptoms before March 2018, we had a delay between the principle of the disease and the confirmation of the diagnosis. This could have happened because Portugal has a low incidence of measles, therefore, health professionals and doctors do not often see it in clinical practice and thus measles may not have been diagnosed as a first hypothesis. Another contributing factor is an atypical clinical manifestation of the disease in vaccinated individuals [16].
The atypical clinical presentation of measles in vaccinated individuals can occur with mild and moderate symptoms [17] in a similar way to the epidemic object of our study (maculopapular rash as the only criterion or mild fever). To ensure that as many cases as possible were identified during the outbreak, the case definition was adapted, increasing sensitivity, taking into account the atypical presentation of measles.
In a country with a low incidence of measles, this epidemic emphasizes the risks and challenges posed locally, such as the infection of fully vaccinated individuals and the sustainability of the herd immunity effect in a healthcare institution. Further research on this epidemic is currently underway, including genotyping of all cases.

Thanks
We thank the following health professionals; Jorge Goncalves, Teresa Cruz, the trainees and doctors of the Infectious Diseases team, Sandra Xara ', Sonia Almeida, Maria Conceicao Costa, Maria Do Ceu, Patrocinia Rocha, Alexandra Fernandes, the Occupational Medicine team, Idalina Beirao, Laura Marques, Guilherme Queiroz and the CHP general practitioners who helped the Emergency team (ERT) during the outbreak. Since this is a collaborative work, we would like to thank all the public health teams that investigated the cases and the infection, DSP, INSA and DGS.

Conflict of interest
No conflict declared

Contributions of the authors
Rita Sa 'Machado, Mariana Perez So, Ana Sottomayor, Ivo Cruz, Soraia Almeida, Julio R. Oliveira and Isabel Aleida contributed to data collection, case information and data analysis.
Delfina Antunes coordinated the investigation into the epidemic.
Rita Sa 'Machado and Mariana Perez So they prepared the draft of the manuscript, with the contribution of Ana Sottomayor, Ivo cruz and Soraia Almeida.
Delfina Antunes, Julio R. Oliveira and Isabel Almeida have been involved in the revision of the manuscript.
All authors have reviewed and approved the final version.