"We are underestimating the cocktail effect of pesticides and endocrine disruptors" 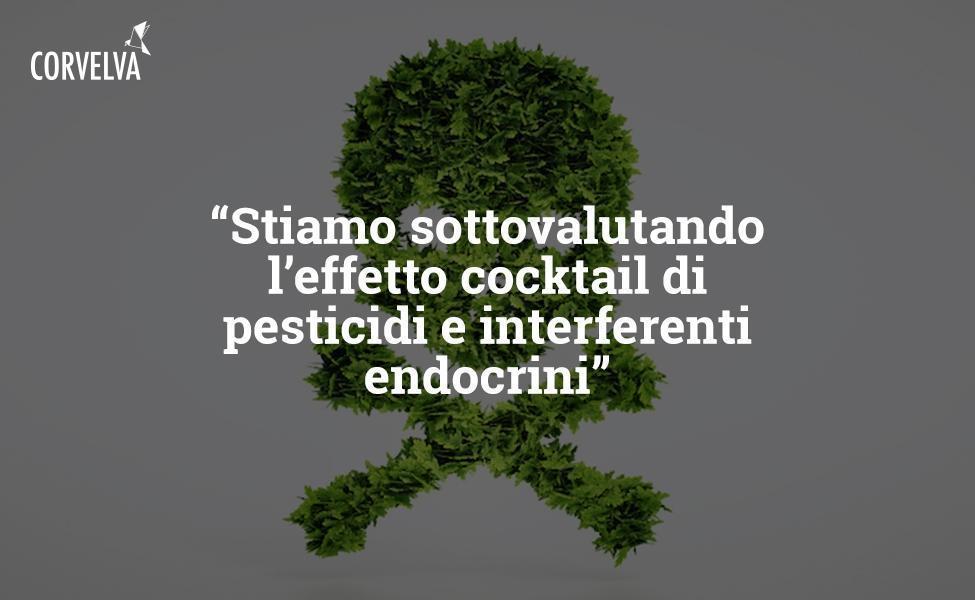 Not only environmentalists and consumers are concerned about the pesticide cocktail that we ingest or, more generally, to which we are exposed daily. Scientists also have strong doubts that substances that, in low doses are safe, can interact once they are together and enhance mutual effects. And they say it clearly in one article just released on Horizon, the European Commission's magazine dedicated to research and innovation.

"We are exposed to thousands of chemicals at the same time, often in low doses, but in some cases they can interact and enhance mutual effects," said Dr. Joelle Ruegg, a molecular toxicologist at the Karolinska Institute's Institute of Environmental Medicine. . in Stockholm, Sweden.

Of particular interest are endocrine disruptors, man-made chemicals that interfere with our hormone system. Examples of these substances are phthalates and bisphenol A used in plastics, but also pesticides. They have subtle influences, even in minute amounts, while not lethal to cells or animals in laboratory tests at high doses. This makes them difficult to study, the researchers explain.

It is no mystery that when scientists test one of these chemicals in the lab, they may not detect any harmful impacts, while if I add the simultaneous presence of other molecules they find combinations capable of causing damage. Ignoring these cocktails can cause us to ignore important health effects. "

If we don't take into account the many chemicals that have a similar effect on the hormonal system, we are underestimating the risk, ”explains Dr. Ruegg.

Ruegg collaborated on a European study called EDC-MixRisk on the impact of chemical mixtures on children's health and development. This study measured the exposure levels of 41 chemicals in the blood and urine of over 2.000 pregnant women in Sweden. When the chemicals were tested one by one in cells and animals, there was little effect, but when mixtures of 8 or 15 compounds were tested on animals at levels found in women, the sexual development and metabolism of fish and mice tested were unaffected. “We have seen effects in many of our models at levels comparable to what we could measure in pregnant women,” Ruegg said.

Based on the levels in pregnant women, 11% of the children were at risk of having problems with sexual development due to mixtures. The risk, however, would have been only 1% if the assessment only covered individual chemicals, one at a time.

Traditionally, chemicals are regulated as single compounds, often under separate laws or by different regulators, which do not reflect the way we meet them.

“But the body doesn't care if it's a pesticide or plasticizer, or if it's found in food or drink. It will be important to face the blends together, ”Ruegg explained.

Dr Marike Kolossa-Gehring, a biologist and toxicologist at the German Environment Agency in Berlin, agrees. "From our data we find that every person living in Europe has between 200 and 300 chemicals (detectable in blood or urine) and so we need to investigate the effect of the mixtures," he said.

Kolossa-Gehring coordinates a project called HBM4EU which measures man-made chemicals in people and investigates possible health implications. The project has compiled a list of 18 priority substances , including chemical mixtures, which its scientists need to study to provide better information to policy makers.

"Our established systems focus on individual substances, but we know from the experiments (in the toxicological literature) that while a chemical cannot have any effect, if we combine ten of these chemicals, we see an effect," said Dr. Kolossa- Gehring.

Mixtures of chemicals that destroy the endocrine system, for example, can affect the sexual and neurological development of fetuses, reduce the immune system's response after vaccination, and in adults they can be a factor of metabolic syndrome, which includes obesity, hypertension and diabetes. , according to Kolossa -Gehring.

The aim is to help regulators ensure that European consumers are not exposed to harmful chemicals and that they can get the information they need to make informed purchasing decisions. Good chemical policy requires action on a European scale, says Dr. Kolossa-Gehring, informed by good science. A total of 117 scientific groups and agencies in 28 countries are collaborating on this project.

An example cited by Dr. Kolossa-Gehring is glyphosate, the controversial crop protection product whose use was renewed for another five years in 2017.

The chemical properties of this herbicide are known, but they appear to be different from what we once see in the mixture it is sprayed into, says Kolossa-Gehring. “These differences need to be studied to better protect people in Europe”.

Kolossa-Gehring states that European legislation, called REACH , puts the responsibility for product safety on industry, but government actors must verify that the control system is working well enough to protect consumers.

"With the problem of the cocktail effect, it appears that we are systematically underestimating the impact of chemical exposure (in the first place)," said Dr. Colossa-Gehring.

Dr Kolossa-Gehring says the project will also provide information through consumer fact sheets to learn how they can reduce their chemical and mixture load. "People need to be aware of what behaviors are related to high exposure to chemicals," he said.