The greed of Big Pharma is killing 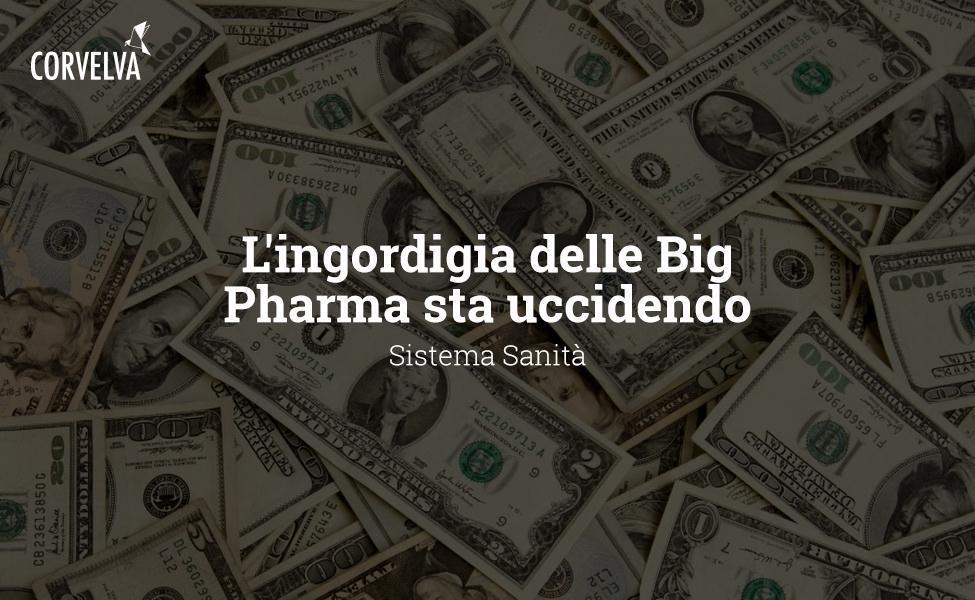 Former Queen of England physician Sir Richard Thompson and former president of the Royal College of Physicians in London started a campaign in late 2016 calling for a public inquiry into the "dark practices" of pharmaceutical companies.

With these words, written in February 2016 in the Daily Mail, it directly affected the heart of the problem:

"The time has come for a complete and open public inquiry into how evidence of drug efficacy is obtained and revealed (...)"
"There is a real danger that some current drug treatments are much less effective than previously thought (...) an often weak and sometimes obscure basis on which the efficacy and use of medicines are judged, especially in the elderly"

With him also Dr. Aseem Malhotra, eminent cardiologist and honorary consultant of the NHS, declaring that:

"The healthcare system is facing a failure, rooted in an epidemic of uninformed doctors and patients"
“Such statistical and medical illiteracy is actually the norm. Most healthcare professionals seem unable to understand the medical literature ... 70% of those who participated in a training program failed a simple test on their understanding of evidence-based medicine (...) "
"... the side effects of too many medicines are leading to countless deaths"

Sir Richard Thompson is part of a group of six eminent doctors who today warn about the influence of pharmaceutical companies on prescription drugs. Experts, led by NHS cardiologist Dr. Aseem Malhotra, say that patients are too often given unnecessary, and sometimes harmful, drugs they don't need.

Writing in the Daily Mail Online, Dr. Malhotra says that commercial conflicts of interest are contributing to "an epidemic of uninformed and malformed doctors in the UK and beyond." In addition, he adds, that "the side effects of too many medicines are leading to countless deaths."

There is a real danger that some current drug treatments are much less effective than previously thought. "

In support of the team's theses are the complete data on statins (cholesterol-lowering drugs prescribed to millions of people) that have never been published and doubts also on the properties of Tamiflu, a drug that cost the NHS almost 500 millions of pounds.

The group invited the British Parliament to open a public investigation to conduct an independent investigation on the safety of medicines, also considering that in the year 2016 alone, one in three over-75 hospitalization in England was due to an adverse reaction to the drug.

The expert team's complaint starts in February 2016 but continues throughout 2018 with a personal campaign by Dr. Malhotra against statins.
In 2014, the prescription thresholds were lowered in the UK, thus encouraging the prescription of these drugs to a vastly higher number of people. But it later emerged that 6 of the 12 panels of experts had received funding from drug manufacturers, both paid directly for speeches or conferences, and through research funding.

Dr. Malhotra claims that complete data on statin power and its side effects have never been published. The article sent to the Daily Mail also refers to questions about the effectiveness of Tamiflu, an influenza drug. A 2014 report by a group of eminent scientists concluded that Tamiflu was no longer effective than acetaminophen but the cost was obviously greater and not a little.

The system reported by the team of doctors is now known all over the world, financial incentives within the health system of each country to prescribe more drugs and carry out more medical procedures regardless of whether it benefits patients. But for Dr. Malhotra there is an even more sinister barrier: this over-prescription system is systemic, by now this is the information that is provided to doctors and patients to guide decisions on healthcare treatment.
In March 2017, Dr. Malhotra, writing in The Guardian, declared that:

There are many confirmations to support the theses of the British doctors. In late 2015, NHS England medical director Sir Bruce Keogh admitted that one in seven NHS treatments - including operations - was unnecessary and should not have been performed on patients. The latest U.S. data estimate that a third of all healthcare activities do not benefit patients.

Everything that has been reported by the team of British doctors since early 2016 had been retrospectively confirmed by a point raised by the former director of the New England Journal of Medicine, Dr. Marcia Angell. In a speech at the University of Montana in 2009, Dr. Marcia Angell revealed that among the 667 new drugs approved by the FDA between 2000 and 2007, only 11% were considered innovative or improvements to existing drugs and three quarters were essentially only copies of the old ones.
The Food and Drug Administration reports in 2017 that adverse events from prescription drugs have more than tripled in the past ten years in the United States. This resulted in over 123.000 deaths in 2014 and 800.000 total severe patient outcomes, including hospitalizations and life-threatening disabilities. But this probably represents a gross underestimate.

One person who has long been on the dangers of modern drugs is Peter Gotzsche, professor of research design and analysis at the University of Copenhagen. Gotzsche estimates that prescription drugs are the third most frequent cause of death after heart disease and cancer.
Gotzsche in particular is deeply concerned about the impact of psychiatric drugs including antidepressants and dementia drugs. Gotzsche, writing in the BMJ, calculated that they are responsible for over half a million deaths in people over the age of 65 in the United States and the European Union. This is due to the suicides, but also because the patients are too medicated and sleepy. Indeed, it is the elderly who are most at risk of the so-called polypharmacy - where a patient is taking multiple medications. Studies by Prof. Gotzsche find that with polypharmacy it is that the more medicines you take the more likely you are to experience side effects that are misinterpreted by a doctor or nurse as a symptom of a disease that needs to be treated with medicine. additional.

"It's a vicious cycle and costs lives every year"

The fact that in England of prescription drugs in the year 2016 were at their highest (more than 1 billion prescriptions) should be considered in itself a public health crisis.

"When a patient comes to see me with a new symptom, my first thought is that it could be a side effect of the drug.
The system is broken and can not simply be solved by pouring more money. The corporate greed and the systematic political failure have put the NHS on their knees (...).
For the sake of our future health and sustainability of the NHS is time to real collective action against "too much medicine."
Medical science has taken a turn towards the darkness and light of the sun will be his only disinfectant. "