The assignments, the millions, the conflicts of interest from Sicily to Rome 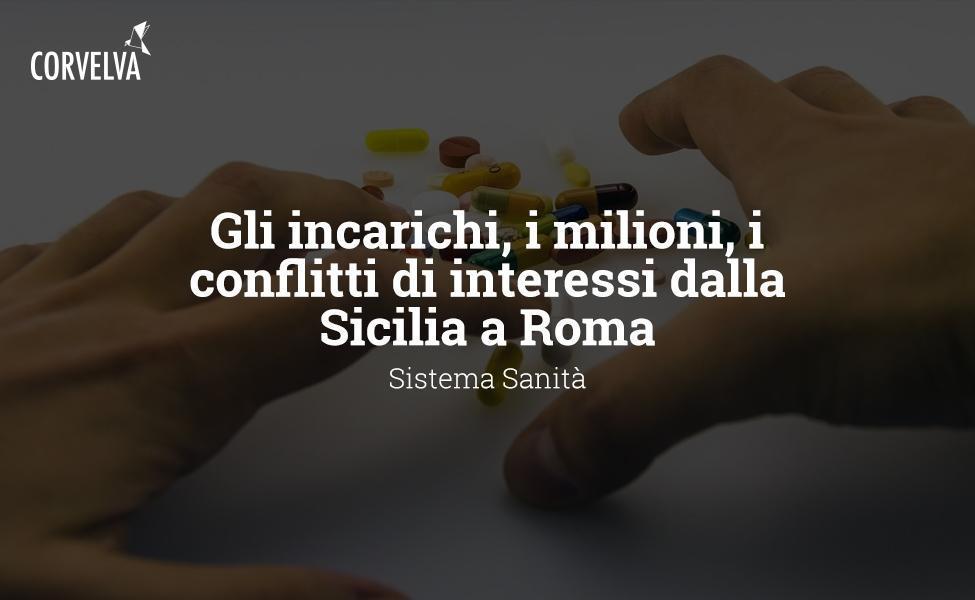 The investigation into pharmaceutical companies' funding for healthcare in the three-year period 2015/2017, which began in January from ilSicilia.it.

In Sicily, adding the contributions of Gilead e Novartis, they would arrive 12 million 983.673,1 euros. The first, US multinational company specializing in antiviral drugs, also for the treatment ofHiv, he would have paid over 600 thousand. The second, a Swiss giant preceded by turnover only by Pfizer, more than 7 million. To these are added also the "milaeuro" paid by Alcon e Sandoz, two of the operational divisions of the Novartis.

From the beginning of our investigation to today, something has moved. In Sicily, the Codacons has distrusted all orders from doctors in the region. The national management, however, conducted a study on other pharmaceutical companies and made a special one carry-over presenting a complaint to the National Anti-Corruption Authority (ANAC) and asking to "open an investigation and verify the full correctness of the grants". On this basis, the Court of Auditors of Liguria he asked to acquire the documentation together with the complainant and opened an investigation. 611 doctors ended up under the magnifying glass.

In Sicily, 88 beneficiaries would have received the transfers of Gilead and 664 those who would have financed, repaid, "paid", Novartis. Yes, because in the accounting documents, among the items that justify the payments, there is one that also refers to the professional consultancy. We cannot yet speak of scandal or crime but, at least, of a crib to shed light on. Consequentially ask if it is really necessary that professionals who prescribe medicines or who are called to decide on the fate of public health, accept assignments, prebends and sinecures from whom the drugs sell them.

Case, the latter, which would concern the Superior Health Council, a story on which so far nothing had been written. In February, the Minister of Health Giulia Grillo, he appointed president Franco Locatelli, an esteemed physician avowedly "pro-vax".

"(...) From large-scale vaccination policies - he said in his first public statement after the appointment -Those patients who have also benefited significantly through that phenomenon known as herd immunity (...) they do not enjoy full efficiency of their immune defenses (...) ".

Locatelli has gained a great deal of experience in the direction of the Onco-Hematology department of the "Bambino Gesù Children's Hospital" in Rome. Now he directs the advisory body, and purposeful, of the dicastery that decides policies related to Italian health and health. According to the documents that can be downloaded at the bottom of the page, Locatelli would have had relationship with Novartis. The Swiss multinational, previously also active in the vaccine sector, is also specialized in cancer drugs.

The pharmaceutical company would have reimbursed and "paid" Locatelli, recording the fees under the items “Contribution for the financing of events - travel and hospitality - " is "Fees for professional services and consultancy". It is a few thousand euros but, except that we cannot speak of a crime, if anything of a conflict of interest, because it should be strange to think that whoever is called to decide, or influence, constitutional bodies should not have previous relationships with those who does it produce drugs placed on the market? The hope is that Locatelli has not lent his professional competence to other companies, moreover why suspect him regardless? But it is also legitimate to think the opposite. More could also emerge.

This is the case of the funding that came up that would have been transferred toHigher Institute of Health. This too is an exclusive of ilSicilia.it which he already had in January documented the 219.600 euros, it seems, paid by Glaxosmithkline. The Institute, in fact, would also have received the funds of the Gilead: 103.855,8 euros for a total, therefore, of 323.455,8 euros.

Now, Minister Grillo had found himself, in some way, managing a situation that was at least intricate because of the alleged conflicts of interest that touched the heads of the state administration. The president of the body, under public law, until the resignation of 18 December last was Walter ricciardi. His, a past full of alleged conflicts of interest, and had already been the subject of two questions: one in the Senate, from Paola Taverna, the other to the European Parliament, from Piernicola Pedicini (both of the 5 Star Movement).

The shadow of one could be seen on the horizon fault in watching to which one could be added culpa in eligendo since the successor of Ricciardo was later indicated by Codacons as a bearer of private interests.

After the resignation of the former president, the Minister of Health had to appoint an extraordinary commissioner: his name is Silvio Brusaferro that according to the consumer association "he appears among the presidents of the organizing committee of the 51st national congress Siti (Italian hygiene society) with the sponsorship of Glaxosmithkline, Msd and Pfizer ".

Just for Locatelli that for Brusaferro, one can reasonably think that these are assignments intuitu personae, therefore also based on requirements related to competence and "trust". It shouldn't be too laughable to think about the appointment of Locatelli as an additional fault in watching, even if it were just one euro from any drug giant. Good faith is not doubted, if anything, a concept that goes beyond that of "diligent good faith" which translates with greater attention and control into appointments. The minimum to respect dogmas of transparency beyond any reasonable doubt.

IN SICILY. Among the natural and legal persons contained in the 2015/2017 transfer lists, there are often the same names. Registered as "health organizations" appear once again the Universities of Palermo and Catania, respectively with a total of 121.390,47 and 278.432,08 euros. Tail light, so to speak, theUniversity of Messina that between Gilead e Novartis would raise 74 thousand euros. Here the rector Salvatore Cuzzocrea he would have received, when he was not yet in office, just over € 5.000 which will add to the sums indicated in the records of the other pharmaceutical companies that we have already documented.

Maybe to Palermo more than in other cities, the lists of beneficiaries reproduce the same names. In fact, the Sicilian health training center directed by the president of the Medical Association of Palermo, Salvatore Amato. Then again theBuccheri La Ferla hospital, the Civic hospital, Villa Sofia-Cervello, foundations, onlus. Also in Palermo, a Committee that would have received a substantial funding, after an inspection carried out on the spot, no longer appears in the registered office of the pharmaceutical company. There is no trace of it even on the internet.

Furthermore, as we have repeatedly stressed, there is a further element of perplexity regarding the foundations. Transfers to them could circumvent the party funding law. These, in fact, are often connected to political formations.

Most of the funds would have poured on Palermo but the rain of money does not seem to have stopped at the capital. In fact, the registers also show the “Martino”Of Messina, theAsp and Arnas Garibaldi of Catania.

The Anac directed by Raffaele Cantone, in recent months he confirmed that he had received the complaint made by Codacons on Sicilian doctors. Also this time we contacted the Agency's offices to obtain a declaration but it has not yet been possible to receive a reply.

Download the data below with the names and numbers: