The Kano - Pfizer Litigation, a crime against Nigeria 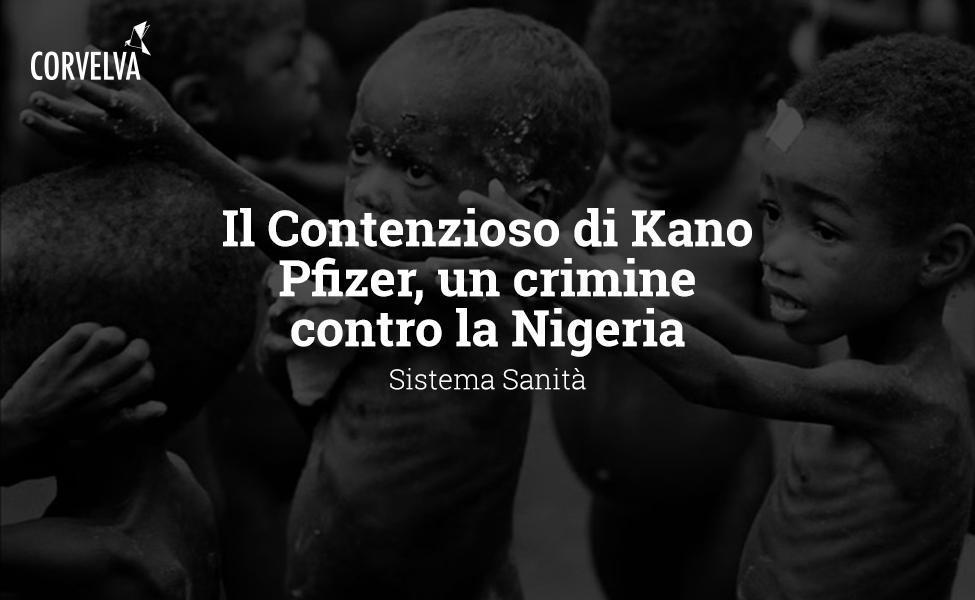 The expression "Kano litigation" expressly refers to all those court cases that involved the multinational Pfizer following an unauthorized human experimentation on children in the city of Kano, Nigeria.

In 1996, more than 12.000 people died in Africa from a meningitis epidemic. In Kano, in northern Nigeria, the doctors of Pfizer, one of the largest pharmaceutical companies in the world, offered, as part of an emergency program launched by the WHO (World Health Organization) to treat about two hundred children, half with the new experimental drug Trovan, and half with the best meningitis drug on the market at the time, Ceftriaxone.

5 children died under treatment with the new experimental antibiotic Trovan (while many others fell victim to blindness, malformations and paralysis) and however according to Pfizer doctors the test had a good result.

The experimental antibiotic Trovan was subsequently marketed in Europe but only for adults and, practically immediately, in 1998 withdrawn from the market due to its high toxicity.

Public opinion around the world put the spotlight on the case of Kano's children after the journalist Joe Stephens wrote an article in the Washington Post on December 17, 2000 that well described Kano's situation.

In that dusty town of Nigeria, an epidemic was raging that claimed many victims and the arrival of foreign doctors who dispensed expensive medicine for free was seen by the population as absolute salvation. The aid organization Doctors Without Borders had already set up a treatment center aimed solely at saving lives, while Pfizer's doctors and researchers had set up a separate unit. They were using the Nigeria meningitis epidemic to conduct experiments on children with what Pfizer believed to be a promising new antibiotic - a drug not yet approved in the United States.

The experimental drug was a potential success: Wall Street analysts said Pfizer could raise $ 1 billion a year if Trovan got approval for all its potential uses. Pfizer also wanted to test the drug for use against meningitis, including an epidemic strain. The company could not find enough patients in the United States, so its researchers had come to Kano, among the dying.

The most emblematic case, or at least the one that arrived on the Washington Post desk, was of a 10-year-old girl weighing 41 kilograms. His name was never known, he was replaced by Pfizer doctors as patient number 0069 on test site number 6587.

6587-0069 lived in Nigeria, Kano, and in April 1996 contracted meningitis but died 3 days after taking a dose of 56 milligrams of the experimental antibiotic Trovan. Obviously no one can know if the death of 6587-0069 occurred as a result of the experimentation, especially given that the only data in the possession come from the medical records of Pfizer researchers, but this is not the point. Maybe the girl was beyond hope. Yet the circumstances of his death, after taking an unapproved drug in a situation where a private company was experimenting with a drug, suggest much bigger problems.

These drugs, like Kano's drug, skip the boundaries with a poor government review and enter the total solely private review. The controller is the one who produces, tests, sees. The scarce resources that FDA allocates to oversee experiments abroad allow pharmaceutical companies to pay doctors in Third World countries and Eastern Europe to test their drugs for thousands of human subjects.

The alarming issue is that the FDA, like the EMA, requires that patients give you all tests, regardless of where they live, fully consent to the experiments if the results are to be used to obtain marketing approval. But the investigation that resulted from the Kano litigation trials and later from the Washington Post found that in many other cases the rules were not being applied, there was no informed consent and therefore how the FDA or does the EMA approve pharmaceutical products if the documentation required for the approval itself is missing?

Obviously, being Pfizer American, the problem and the questions widen. If the FDA could not have approved the Trovan drug, were the American institutions aware of it? The Nigerian ones?

An anonymous source sent a very long and detailed report from the Nigerian government to the Washington Post in 2006. This report, with explosive contents, was hidden from everyone despite the investigation of the children's lawyers and the media around the world. The report concludes as follows:

Pfizer has never obtained authorization from the Nigerian government to give the unproven drug to nearly 100 children and babies. Pfizer selected patients in a field hospital in the city of Kano, where the children had been treated for an often deadly strain of meningitis. At the time, Doctors Without Borders distributed approved antibiotics to the hospital ... Pfizer's experiment was an illegal trial of an unregistered drug, a clear case of exploitation of ignorance "

Pfizer has always claimed that its researchers went to Kano with a purely philanthropic motive, to help fight the epidemic, which ultimately killed more than 15.000 Africans. The Nigerian medical commission totally rejected this ridiculous explanation, stressing that Pfizer doctors completed their trial and left while "the epidemic was still ongoing" and the experiment violated Nigerian law, the International Declaration of Helsinki governing ethical medical research and the UN Convention on the Rights of the Child.

The Nigerian team of experts who drafted the report on the Kano case recommended that Pfizer be "appropriately and directly sanctioned, officially asking Pfizer to make an apology without reservation to the government and people of Nigeria.

In finding the documentation related to the case of Kano, we realized how many aspects of the matter remain after very very mysterious years. To date, we have read about the Nigerian government's report only through the Washington Post since the report remains confidential today. The head of the government investigation team, Abdulsalami Nasidi, declared in 2006 that the report has never been published. It is assumed, reading articles from Nigerian newspapers, that Nasidi portrayed having been the target of unspecified death threats to date.

The investigation concluded with a confirmation, Pfizer never asked for the consent of the children's parents or the Nigerian government for the experimental treatment. In 2010 the North American Supreme Court authorized the trial against Pfizer and four Nigerian families received compensation of $ 175.000 each from a fund of $ 35 million created by an agreement between the pharmaceutical company and the city of Kano where the experiments. The payments are part of an out-of-court settlement reached in 2009.

This incident is one of the causes of the failure of some polio vaccination campaigns promoted by the WHO in Nigeria, which is the country with the highest percentage of polio sufferers worldwide.