Big Pharma convictions in the USA 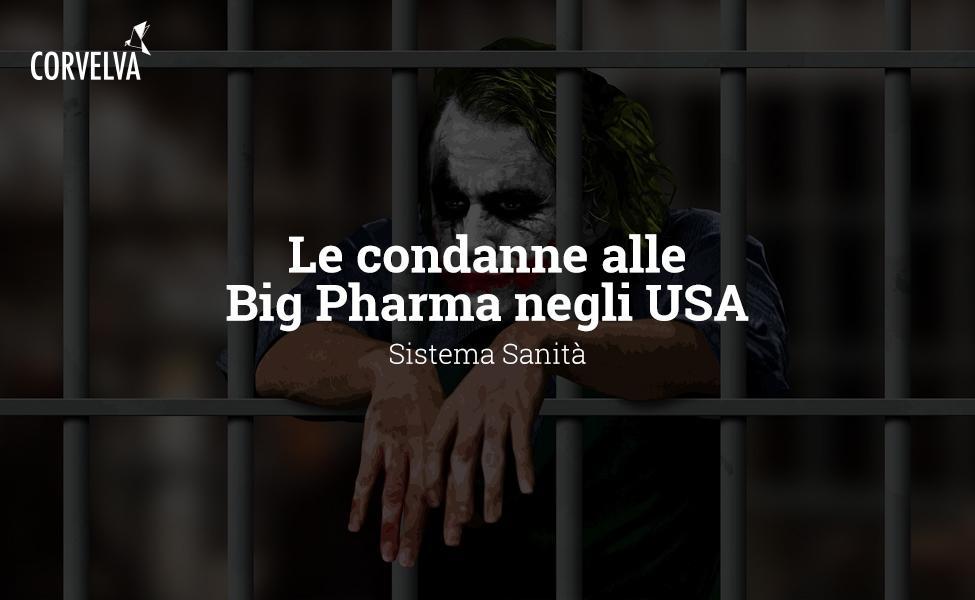 In this article we enclose some convictions, also understood as plea bargaining, sanctions of the controlling bodies or real condemnation by the courts of justice, which occurred in the last 20 years in the United States of America.
We report the links of each sentence, but what does not appear in this cold list are the deaths resulting from this criminal behavior.

For every off-label use of pharmaceutical products, for every serious violation, there are deaths, tens of thousands of deaths behind and we are only talking about one nation, America. We speak of convictions with economic implications which, although apparently large, are a zero point .... etc etc of annual turnover globally.

These companies live for a single purpose, profit. The benefit we derive from the drugs they produce is absolutely secondary to their shareholder interest. This situation is now escalating into global drug abuse. Tackling this drift is difficult, our task is limited to remembering, leaving traces in people's memories.

One thing is important: none of these companies could have committed these abuses if it had not had the connivance of doctors and scientists. Science and medicine save millions of lives, and kill many more for the sole purpose of creating profit. We know that this claim is serious but it is a part of science and medicine that destroyed, perhaps irreparably, the trust relationship with the citizens.

What makes us shudder in these few sentences is that for some it has been ascertained that the criminal attitude has threatened the health of the most defenseless people, children, the elderly and people with mental disorders.

The Top 10 of the amounts paid and number of convictions

The complex thing in identifying the condemnations of Big Pharma, also understood as bargains or penalties by the controlling bodies, is that often they are not the ones to be condemned but the satellite companies connected to them. The following table groups the top 10 "parent" companies by paid numbers and number of convictions, we are talking about 233 convictions for a total of 24.390.752.999 dollars from 2000 to 2019.

The Top 10 of the biggest convictions

July 2, 2012 - Off-label or unapproved promotion of medical products and violation of the safety of pharmaceutical or medical equipment.

GSK pleaded guilty to criminal information for introducing off-label drugs, Paxil and Wellbutrin, and for failing to report safety data on the Avandia drug to the FDA. The same pharmaceutical company has made use of misleading scientific publications, wrong clinical studies and has paid millions of dollars to doctors to promote drugs Paxil and Wellbutrin.
GSK has hidden Avandia's safety data and promoted this drug to doctors and other health care providers with false statements.

Pfizer Inc. and its subsidiary Pharmacia & Upjohn Company Inc. have agreed to pay a fine for fraudulent marketing and off-label use of the Bextra, Geodon, Zyvox and Lyrica drugs.
The Department of Justice has alleged that Pfizer has paid bribes to doctors to prescribe their medications by bribing the medical decisions of healthcare professionals and leading to a burden of millions of dollars on the American health system.

Johnson & Johnson paid $ 2,2 billion to promote Risperdal, Invega and Natrecor drugs fraudulently. It was found that J&J paid bribes to doctors and healthcare professionals for drug promotion by making a profit on the health of patients and threatening the health of the most helpless, children, the elderly and people with mental disorders.
Also in this case artifact studies have been produced to decrease the number of adverse reactions, therefore compromising the data on the safety of the products.

7 May 2012 - Off-label or unapproved promotion of medical products.

Abbott Laboratories Inc. pleaded guilty to promoting the use of the drug Depakote fraudulently. In addition to using its sales force to promote the drug to health care providers and nursing home employees (the drug was used off-label for the control of senile dementia), Abbott created programs and materials to train pharmacists. and advice from pharmacy suppliers on off-label use of Depakote to encourage them to recommend the drug for this unapproved use. Under these contracts, Abbott paid millions of dollars in discounts to pharmacy suppliers. Abbott funded two studies using Depakote for the treatment of schizophrenia, and both failed to achieve major goals but were used to promote the drug.

Eli Lilly and Company has agreed to plead guilty and pay $ 1.415 billion for the fraudulent promotion of its drug Zyprexa for uses not approved by the Food and Drug Administration. This resolution included a $ 515 million criminal fine, $ 100 million in confiscation of assets, and up to $ 800 million in a civil agreement with the federal government and states.

28 May 2015 - Pricing or anti-competitive practice

The Federal Trade Commission has reached an agreement to settle a lawsuit against Cephalon, Inc. for illegally blocking competition against the sleep disorder drug Provigil. The deal ensures that Teva Pharmaceutical Industries, Ltd., which acquired Cephalon in 2012, will make $ 1,2 billion available to compensate buyers, including drug wholesalers, pharmacies and insurers, who have been overpaid. due to Cephalon's illegal conduct.

The American pharmaceutical company Merck has agreed to pay $ 950 million to settle criminal charges and civil claims related to its fraudulent promotion and commercialization of the Vioxx pain reliever (rofecoxib). Under the terms of the resolution, Merck accepted a $ 628 million civil agreement and a $ 322 million penalty fine.

TAP Pharmaceutical has agreed to pay a total of $ 875 million to settle a case involving fraudulent pricing and incorrect marketing of its Lupron prostate cancer drug. The amount included a $ 290 million penalty for violating the Prescription Drug Marketing Act; a $ 559,5 million civil liability claim under the False Claims Act; and $ 25,5 million in payments to state governments. TAP was previously a joint venture of Takeda Pharmaceutical and Abbott Laboratories; the companies dissolved the company in 2008 and Takeda took over most of its operations.

The Justice Department announced that the pharmaceutical companies Wyeth and Pfizer Inc. have agreed to pay $ 784,6 million to resolve allegations that Wyeth has knowingly informed the government's fake and fraudulent prices on two of its pump inhibiting drugs. protonica, Protonix Oral and Protonix IV. Pfizer acquired Wyeth in 2009, about three years after Wyeth ended the conduct that gave rise to the settlement.

US District Judge Sterling Johnson, Jr. accepted the US biotechnology giant Amgen Inc.'s plea for guilt for illegally introducing a trademarked drug into interstate commerce. The appeal is part of a global agreement with the United States in which Amgen has agreed to pay $ 762 million to resolve the criminal and civil liability arising from the sale and promotion of certain drugs.