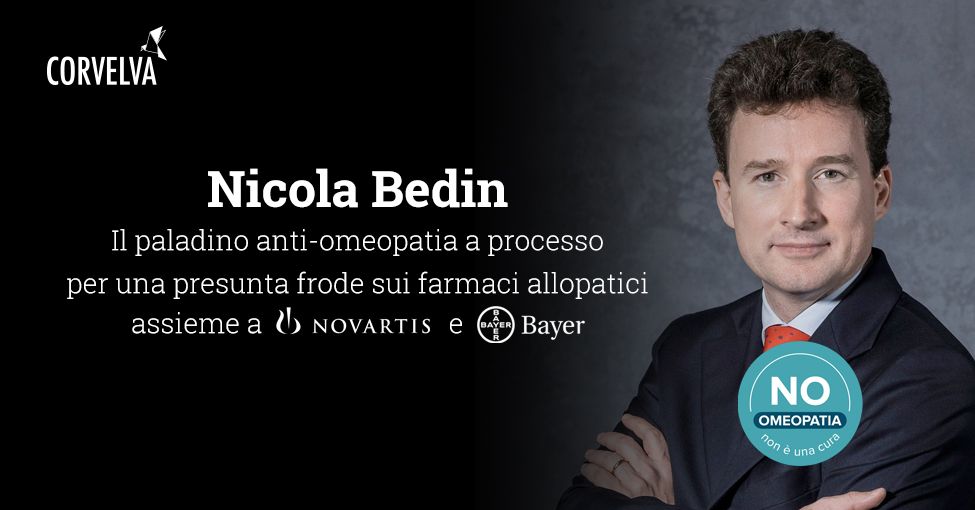 In November 2019 the entrepreneur Nicola Bedin, patron of the San Donato Hospital Group[1] until 2017, the largest Italian private healthcare group with 19 hospitals, began by saying:

«Homeopathy is not a cure, it must be banned from clinics and hospitals ... We must protect sick people».

The campaign of the entrepreneur Bedin found the acclaim of 57 hospitals and clinics who lined up to say no to homeopathic treatments.[2] Some of you may agree and others may disagree but this is not the point in our opinion. The real point is that we live in that beautiful country where too often conflict of interest reigns supreme, where entrepreneurship, politics and the underworld coexist in the same muddy pond and where, behind personal opinions on any subject, even homeopathy, sometimes different interests can be hidden.

Today, more than two years after Bedin's declarations, we discover that five hospitals of the San Donato Group have negotiated a financial penalty of 200 thousand euros each, while eight people, including the anti-homeopathic champion Nicola Bedin and the multinational Novartis and Bayer were instead sent to trial [3] accused of having run a program to defraud the regional public health service in Lombardy.

According to the investigators, the scam was quite simple: nine hospitals of the San Donato Group bought tons of drugs at higher prices directly from the pharmaceutical companies, the companies then practiced discounts from 2 to 20% to the GSD, which however, when it reported the expenses to the Lombardy Region to obtain reimbursements, "forgot" those discounts. Thus the drugs were reimbursed at full price.

We read in an interception of two managers:

«We make him the offer at the law discount. You will rightly tell me: sorry, but why is this a drug that goes on the market, I don't know, for 10 euros, this one buys it for 300 euros? What is this, fool? Instead that is a crafty ... that is, they really set up an industry ... ",

Not only that, according to what the magistrates write in the search order, as reported by the Corriere della Sera [4], the group was stocking up on drugs far beyond the real health necessity: «The number of packages to be purchased is linked to the need to achieve the objectives on which the credit notes depend and not to real clinical needs.

We always read in some interceptions, that the need to buy drugs was such as to get to cram entire refrigerators for the sole purpose of reaching the predetermined target:

“Luckily the other refrigerator has arrived, he puts them there [the drugs, ed] and then we'll see”… »; and «there is an explicit need to reach the plan at all costs», «stocking up and filling the refrigerators with drugs (« until it explodes, but we have to take the goal home »».

We are not executioners forcaioli, Bedin will have the opportunity to defend himself in the appropriate places, but it is interesting to contextualize the incident which, according to the investigators, sees at the center the purchase of huge quantities of allopathic drugs, so many that they end up crammed in San Raffaele where Bedin was ad. Drugs purchased by compliant pharmaceutical companies at a discounted price based on under-the-counter agreements, which the San Donato group, however, was reimbursed by the Lombardy Region at full price. Reimbursements that have caused damage to the regional funds for a total of 22 million euros and that the hospital group is reimbursing. [5]

What we pay attention to is not so much the fact that an entrepreneur has joined a battle against homeopathy, in the end everyone has their own opinion on the subject and the right to express it, but the fact that the site and the no-homeopathy project[6] it is Bedin's own creature and as he pushed this battle to ban homeopathy, his hospital refrigerators filled with allopathic drugs.

In addition and not of secondary importance, we ask ourselves what credibility the dozens of health structures that have joined the NO-HOMEOPATHY project can have ...