Vaccines, the fool of medicine and the profits on the skin of patients 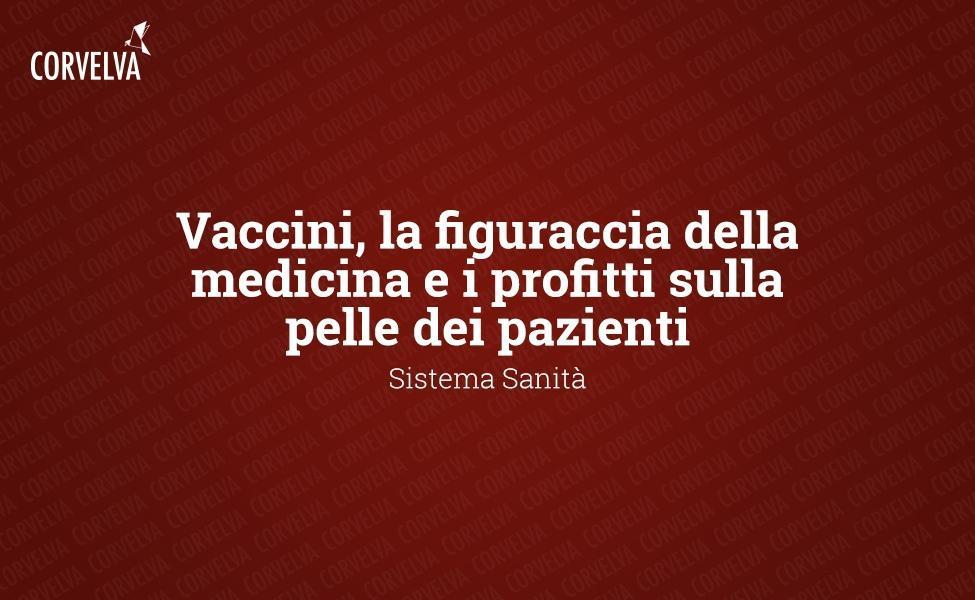 Today medicine seems to be no longer free to express itself as an illuminating and driving force in society because of its almost total subservience to the pharmaceutical market, which acts in the name of maximum profit and certainly not for philanthropy. The current discussion by football supporters between supporters and opponents of the obligation of an excessive number of vaccinations it is objectively unscientific behavior and far from ethics.

The only evidence of this situation is the loss of credibility of the entire Italian medical class which has not been able to represent a beacon of ethical as well as scientific safety for Italian patients. How can we fail to note the contradictions of the strenuous defense of the scientific rationality of the decree in a sector such as that of microbiology where the greatest concern of theWHO Isn't it vaccine research like antibiotic research?

The private pharmaceutical industry, with its Opinion leader largely paid as first salary by the Italian state, it aims to meet the needs for innovative treatments on chronic diseases for decades. He has no interest in researching antibiotics, the use of which can last up to a few months.

Today about 92% of ongoing clinical trials concern chronic degenerative diseases such as cancer and cardiovascular diseases. Not more than 3% of the total includes trials on new drugs to treat infectious diseases. Do they really want us to believe that there are no research possibilities in this field of medicine?

In a few years we will lose the advantage in terms of lengthening the average life on the planet that was given to us by the discovery of penicillin. Nobody remembers anymore that, to favor its diffusion during the Second World War, the scientist Fleming gave up on royalties of patent; on the contrary today we are not ashamed to recover molecules that are not patented, in fact common goods of all humanity, to impose price increases up to over 1500%, for the sole purpose of get the maximum profit from the health needs of the market.

The news of the "scientific" discovery of an incremental situation of "Financial toxicity" also in Italy, linked to the excessive cost of cancer drugs, especially those under patent: the consequence is 20% of failure to recover due to the inability to support the necessary treatments, in the face of80% of the USA where, however, the state does not bear the enormous and frankly excessive cost of innovative and oncological drugs.

The planned increase of about 1 billion per year for the National Health Service public in the three years 2017-2019, approximately 90% of it is in fact absorbed by patented cancer drugs, innovative drugs and vaccines; only a meager ten percent is destined to improve the staff of the health personnel who really take care of the patients (data The sun 24 hours). The social report of a public oncology IRCCS, like mine, already stated in 2012 the 52% of the expenditure for goods and services (drugs and aids) and only the 48% for the staff.

It is clear, therefore, what is already being registered with the new vaccine law: we have vaccines but we do not have enough health workers to administer them. Today science is used as a tool for economic and political choices not always dictated by a real plus for public health. In Naples, in 1973, a million citizens were vaccinated against cholera in just three months without any legal obligation: that public medicine which was the backbone of our health system in the post-war period, due to an excess of science and a lack of ethics, perhaps no longer exists.