The Republic The pandemics scam April 11 2014 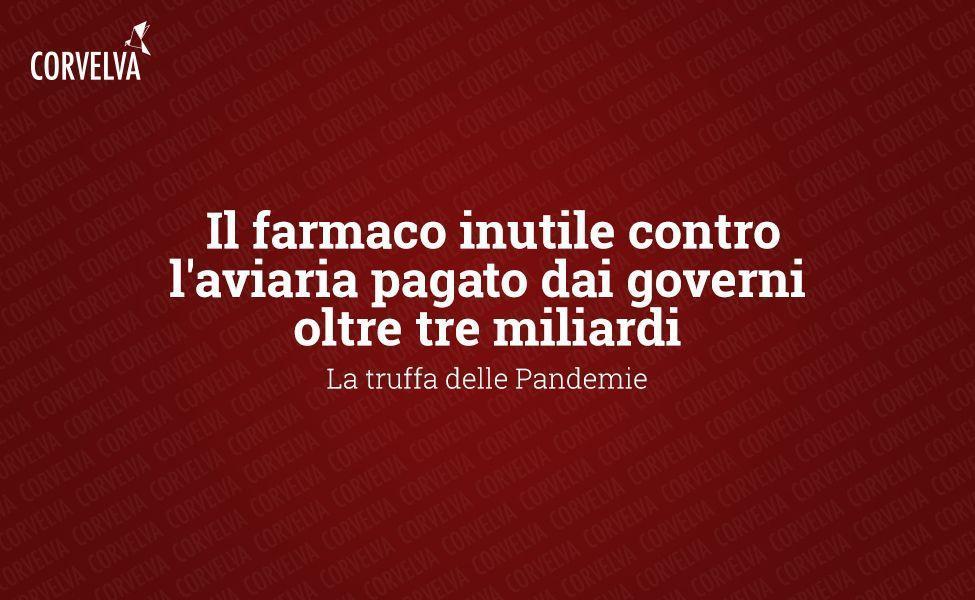 ROMA - The expensive drug Tamiflu that it would have saved us from bird flu, which would have prevented the passage of the flu from chickens to humans on a global scale and fought an epidemic that in the clinical charts could have caused 150 thousand deaths only in Italy, it did nothing. Only to inflate the financial statements of Roche spa, a Swiss multinational that, thanks to the waves of collective panic, sold packs for 2009 billion euros in the world only in 2,64. Two billion six for a single drug which, it is estimated, was used by 50 million people at that time. Uselessly.

Already. A group of independent scientists - Cochrane collaboration - has recently taken up a study of his in 2009 on the relationship between the anti-viral Tamiflu and swine flu (six thousand fatal cases worldwide). And if the non-profit medical organization then claimed that there was no evidence to support the usefulness of the medicine for swine, now it goes further and prints it in the British medical journal: for avian influenza (62 confirmed deaths, up to to 2006) Roche's antiviral has been in vain.

It is certified now, but for ten years a theory of states in the world, on the wave of emotional speculation, has accumulated millions of packs, thrown avalanches of public money and, after five seasons, also thrown expired packs. According to the counter-research, Tamiflu (from 35 to 70 euros per box, according to request and country) contrasts the same effects with the influences of the best known paracetamol. It did not prevent the spread of the pandemic, nor did it reduce the risk of lethal complications. It only eased some symptoms in the first four days of the infection. A tachipirina, certainly not the panacea for blockbuster epidemics.

A new case of Big Pharma deception was served, reported by researchers who detected errors and shortcomings at every stage of the process: production, control agencies, government institutions. The Roche press offices responded promptly yesterday: the research is incomplete and fragmented. It is a fact, however, that Tamiflu will go down in the history of contemporary pharmaceuticals as the most inflated and profitable medicine.

Avian influenza was first described in Piedmont in 1878, but it has been dangerous for humans since 1996. Since then and for ten years outbreaks have touched five continents. Hong Kong originated, then landed in Australia, Chile, Central America, Holland, Belgium, Germany, then Canada, the United States, South Africa, again Southeast Asia, the rest of Asia, still Europe. One hundred and fifty million birds infected and, in the end, 62 dead humans (on average a normal flu strain, every year, causes 700 thousand deaths worldwide). Thanks to the World Health Organization, pushed by American medical control centers, in the mid-XNUMXs Tamiflu Oseltamivir becomes the elective drug for the treatment of avian influenza.

In November 2005, President George W. Bush asked Congress for $ 7,1 billion to prepare for a pandemic, $ 1,4 billion needed to buy antiviral drugs. It will be discovered that one of the articles on which the scientific evidence was based to launch Tamiflu was a study done on a single patient. It will be found, above all, that the drug patent was from 1997 to 2001 of the Gilead company, whose president was Donald Rumsfeld, American secretary of state of the Bush administration from 2001 to 2006: Rumsfeld never left the Gilead stock package and still receives 22 percent of the profits from the sale of Tamiflu.

In those days of alarms on command, the secretary of state imposed the mandatory administration of his drug to North American troops. And Western governments outdid orders in Roche, which struggled to keep up with requests: 2,3 million doses in Switzerland, 5,4 million in Canada, 13 million in France, 14,6 million in Great Britain.

On the avian alarm, the latest issue of the Espresso revealed, the Rome prosecutor's office is investigating a frightening hypothesis: the existing virus in Italy was artfully transformed into an epidemic about to explode. Psychosis generated by researchers and pharmaceutical industries (in this case the Merial of Noventa Padovana) which led the Berlusconi government (ter) to spend 50 million on vaccines which were then left unused. For now, Ilaria Capua, an internationally renowned virologist and deputy of civic choice, has been investigated by criminal association, together with 38 other people.