But how many are the damaged ones recognized in Italy? 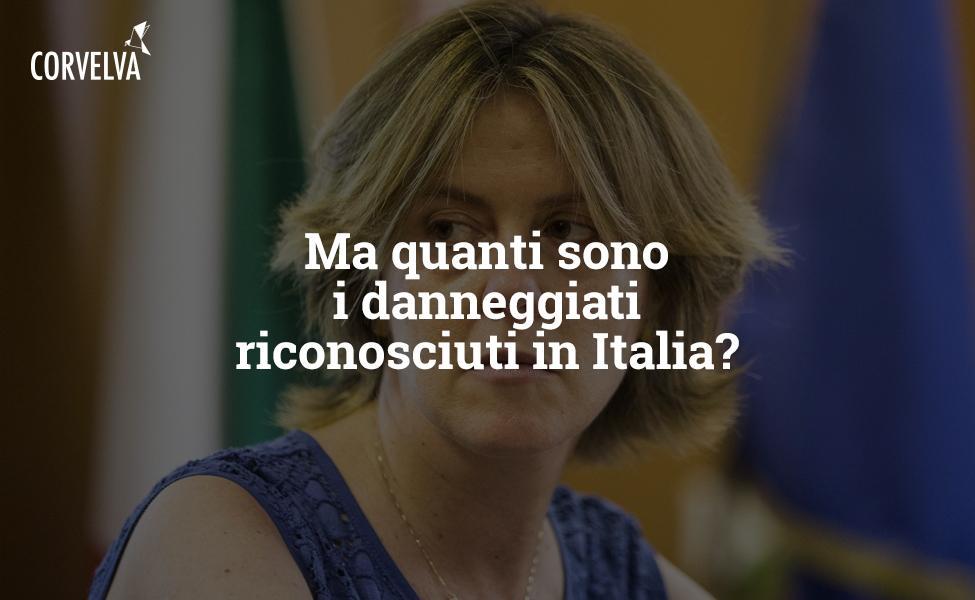 Answer - Law no. 25, entitled "Compensation in favor of subjects damaged by irreversible complications due to mandatory vaccinations, transfusions and administration of blood products", acknowledges to the subjects that following mandatory vaccinations, transfusions and administration of blood products have reported irreversible damage, the right to receive compensation, annuity, by the state. This benefit is recognized following the ascertainment of the causal link between the infirmity and the transfusion of infected blood, or the administration of infected blood products, or mandatory vaccination by the hospital medical commission responsible for the territory, and the amount is parameterised the severity of the damage.

Article. 1, paragraph 1, of the law 29 October 2005, n. 229, provided for the payment of compensation in favor of subjects damaged by irreversible complications due to compulsory vaccinations, which already benefit from the compensation referred to in the law of 25 February 1992, n. 210. The additional compensation consists of a monthly life allowance, amounting to 6 times the sum received by the injured party pursuant to art. 2 of the law n. 210 for the categories from the first to the fourth of table A annexed to the consolidated text referred to in the decree of the President of the Republic 23 December 1978, n. 915, and subsequent modifications, 5 times for the fifth and sixth categories, and 4 times for the seventh and eighth categories. The Ministry of Health is competent to provide this benefit for subjects resident throughout the national territory.

As of March 31, 2015, the beneficiaries of the additional compensation, insofar as they are recognized as being damaged by mandatory vaccinations, are 609, while there are 22 subjects who benefited from it, but whose position was closed following death.

Over the years, there has been a significant increase in litigation, mainly due to 2 factors that affected the activity directed at the liquidation of sentencing documents. The compensation referred to in art. 1 of the law n. 210 consists, in fact, of 2 components: a fixed amount ex lege and the special supplementary allowance. On the subject of the revaluation or otherwise of the component of the indemnity called the special supplementary indemnity, the opposing guidelines have been discussed for years in the case law of the Court of Cassation.

Following sentence no. 293/2011 of the Constitutional Court, which declared the constitutional illegitimacy of article 11, paragraphs 13 and 14, of the decree-law 31 May 2010, n. 78, in the part in which it provided for "paragraph 2 of art. 2 of the law of 25 February 1992, n. 210, and subsequent amendments, is interpreted as meaning that the sum corresponding to the amount of the special supplementary allowance is not revalued according to the inflation rate ", was determined starting from December 2011, and for the whole of 2012, 2013 and 2014 , a considerable increase in the dispute initiated against the Ministry and having as its object the revaluation of the special supplementary allowance, now recognized by the Consulta and on which also the State Attorney has deemed no defense more appropriate. Consequence of this situation is that all the judgments instituted or the injunctions proposed have resulted in convictions for the Ministry.

The growing litigation trend was determined, again in the same years, by a further factor. By jurisprudence, endorsed by the Supreme Court of Cassation, the Ministry is always and in any case considered legitimate passive in the judgments in the matter of law n. 210 of 1992, even when the administrative competence of the practices is based on the Regions, to which the decree of the President of the Council of Ministers of 26 May 2000 has transferred the relative competences and, on this point, the State Attorney has deemed no more useful to defend yourself. Both of these factors contributed to the formation of a backlog quantifiable in approximately 8.000 titles to be performed.

To deal with this situation, a two-year project has been defined in order to execute the sentences and injunction orders sentenced in 2012-2014, which concern the payment of compensation pursuant to art. 1 of the law n. 210, the revaluation of the special supplementary indemnity and compensation for damages.

The Minister of Health
LORENZIN