What is the history of the measles vaccine in America? 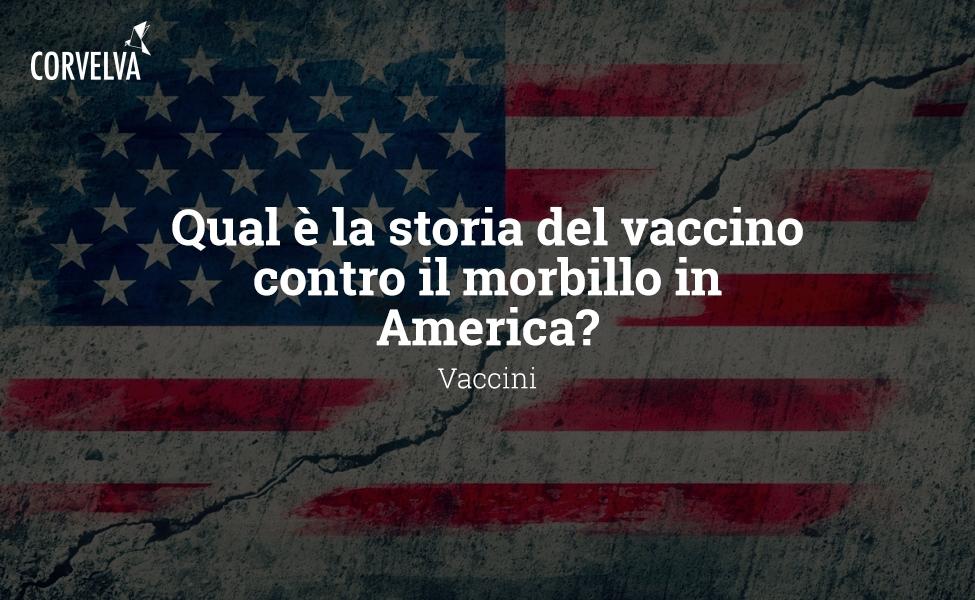 In 1963 the first two measles vaccines were licensed, both containing the Edmonston B strain, isolated by John Enders in 1954, specifically Rubeovax, a live attenuated virus vaccine produced by Merck, and Pfizer-Vax Measles-K, an inactivated virus vaccine, produced precisely by Pfizer.1

At the time of its approval, a single dose of Rubeovax was able to prevent 95% measles, and coverage lasted for at least 3 years and 8 months. However, however, from 30% to 40% of the children to whom it was inoculated, they had fever above 39 ° C starting from the sixth day after vaccination with a duration of 2 to 5 days and, from 30% to 60% they also developed "a modified measles rash 2 and, precisely because of the high number of side effects, public health and Merck officials then recommended co-administration of Rubeovax and measles immunoglobulin to significantly reduce adverse reactions. 3-4

The Pfizer-Vax Measles-K vaccine, on the other hand, was administered in 3 doses at intervals of one month from each other and caused much less adverse reactions, however it offered limited efficacy against the disease. In fact, most children who received the vaccine had no detectable levels of antibodies. 5 Finally, in 1965, reports of a new and atypical measles-like disease that affected children previously vaccinated with this serum and exposed to the virus began to appear, the symptoms of which included rash, swelling, fever, pneumonia and pleural effusion. 6 and following this, the vaccine was withdrawn from the market in 1968. 7

Before 1963, just to counteract its highly reactive nature, Enders made the Edmonston strain available to allow other researchers to work encouraging them to further attenuate the virus. 8 Other measles vaccines that used the Edmonston B strain appeared in 1963 including the M-Vac, produced by Lederle Pharmaceuticals, and other generics manufactured by various pharmaceutical companies including Parke Davis and Eli Lilly but, in 1975, all pediatric ones approved were suspended and replaced with two new and more attenuated, 9 which were developed for use in the mid-60s precisely because of the numerous unwanted side effects related to the previous ones. Lirugen, produced by Pitman Moore-Dow, was developed from the Schwarz strain, derived from the further attenuation of the Edmonston A strain 10, approved for use in 1965 but suspended in the United States since 1976 11 after which it remained in use only outside the United States. Merck instead, using Moraten, further attenuated the Edmonston B strain and in 1968 produced "Attenuvax", 12 which is currently the measles vaccine found in the trivalent (measles, mumps and rubella) MMRII, 13 and in the quadrivalent ProQuad. 14

In 1967 public health officials announced that measles could be eradicated from the United States in a few months with the introduction and use of vaccines. 15 but, the use in children starting from about one year of age and the push to vaccinate all those who entered school with a dose, did not bring the much acclaimed effects, and epidemics continued to occur in highly vaccinated populations. 16-17 In 1971, the same officials noted that outbreaks were on the rise, blaming the unvaccinated population and the lack of laws requiring vaccination as a requirement for access to schools. They recognized the failure, but blamed it on several factors, including the earliness of vaccination before 9 months of age, the use of gamma-globulin measles, the improper handling and storage of the vaccine and only for 3 -5% vaccination failure. The goal of measles eradication in the United States was no longer regarded as something that could be achieved quickly, and perhaps, after all, it was not really something achievable.

In the 70s and 80s outbreaks continued to occur, mainly affecting preschool and school-aged children. 19 In 1979, further efforts were made to eradicate through vaccination, which was to deliver the expected results by October 1, 1982. 20 Just in 1982 the record number of cases was 1.697, while public health officials publicly declared that eradication was "around the corner". 22 Cases decreased again to 1.497 in 1983 but again rose to 2.534, reported in 1984. 23 In 1985 it reached 2.813, with 44% occurring in children previously and adequately vaccinated. 24

In 1989 there was another recovery and towards the end of the year the reported cases were 18.193, 25 with over 40% in fully vaccinated individuals. 26 In this case, the CDC linked the outbreaks to vaccination failure and the non-implementation of vaccination programs, in particular those aimed at children of preschool age, but continued to report a 95% measles vaccine efficacy rate, also denying that induced immunity was waning. Finally, in 1989, the CDC's Advisory Committee on Immunizations (ACIP) updated its recommendations by suggesting that all children receive 2 doses of the MPR vaccine before entering school, with the first at 15 months and the second at 4 to 6 years, i.e. before kindergarten and primary school. 27

Also in 1989, the CDC sponsored a study involving the use of two separate measles vaccines, carried out on minority children living in the Los Angeles area. One of the two used was experimental and unlicensed, but this information was never communicated to parents. 28 This high-dose vaccine was aimed at overwhelming maternal antibodies that naturally protect children from infections during the first year of life according to the theory that the presence of maternal antibodies at the time of vaccination can lead to vaccination failure and the risk of contracting measles in later life. The trial was stopped in 1991, after studies began to appear in 1990 that indicated a higher mortality rate in the females who received it, but omitted to make it public until 1996. While the CDC claimed that no harm resulted from In use, a child who took part in the study died of a bacterial infection, in their opinion unrelated to vaccination. 29

In 1998 alone, concerns about the safety of the combined measles-mumps-rubella vaccine emerged, following a study of 12 (previously healthy) children who experienced severe gastrointestinal complaints after MMR vaccination. 30 and 8 of them also developed autism spectrum disorder, with parents and doctors reporting that symptoms began immediately after receiving the first dose. In addition, the 13 doctors involved in the study reported that they additionally investigated over 40 similar cases. Although these researchers were not claiming that the MMR vaccine was responsible for the reported health problems, they still urged that adequate research be done on the subject. 31

Following the publication, the scientists involved in the study, including lead author Dr. Andrew Wakefield, were subject to enormous efforts by public health officials and vaccination officers in an attempt to discredit the results. 32 In the late 2000s, Wakefield and two contributing researchers, Dr. John Walker-Smith and Dr. Simon Murch, became recipients of disciplinary action by the UK's General Medical Council (GMC), under accusations of bad conducted in association with the study. In May 2010, Wakefield and Walker-Smith were expelled and lost their medical license after being found guilty. 33 Walker-Smith immediately appealed the verdict and in 2012 a UK court overturned the decision. The judge criticized the GMC disciplinary commission stating that "It would be a disgrace if this were to happen again." 34 Following the publication of the case of the controversial Wakefield study, numerous independent researchers replicated the results35 but despite this additional scientific literature, he continues to be demonized by the press and the medical community. 36-37

In August 2014 William Thompson, a CDC senior scientist, came forward claiming that researchers from his own council intentionally omitted data that would show a link between the MPR vaccine and autism among African American boys. 38. In fact, according to Thompson, the researchers involved in the study in 2004 even went as far as to destroy data attesting the findings. After these allegations came to light, Florida Senator Bill Posey called for an investigation into the scientists involved, just to determine if a fraud had actually been committed in an attempt to cover up this link. 39 The concealment of the autism and MPR vaccine link by the CDC became the subject of the film "Vaxxed: From Cover-Up to Catastrophe" a documentary whose debut was scheduled at the Tribeca Film Festival in New York City in April 2016 but which after a series of media attacks, he was withdrawn, 40-41 and debuted at the Angelika Film Center in Manhattan in April 2016. 42 To date, government officials have yet to investigate the allegations filed by Thompson against his fellow CDC scientists.

In January 2015, the CDC found itself investigating a measles outbreak in Disneyland California. In a statement released on January 23, 2015, he announced that 51 confirmed cases had been linked to the event, thus encouraging prevention by vaccination. 43 All this sparked the media frenzy and hundreds of reports of measles epidemics began to appear, resulting in numerous reports of defamation from parents of unvaccinated children. 44 Following these events, several state legislators moved to introduce laws with content aimed at eliminating or limiting pre-existing exemptions for religious and ethical reasons. Freedom of choice advocates were hugely successful in defeating many of these restrictive measures, however in California and Vermont (which maintained only the exemption for religious reasons) they were still enacted. 45 In 2015, only 188 cases were reported across the United States, 46 147 of which are linked to the outbreak in California, 47 and with a 72% drop compared to the previous year. 48

Currently the CDC advisory committee on immunization practices continues to express itself recommending that all children receive 2 doses of MPR vaccine, with the first dose administered between 12 and 15 months of age and the second administered between 4 and 6 years of age. age. 49