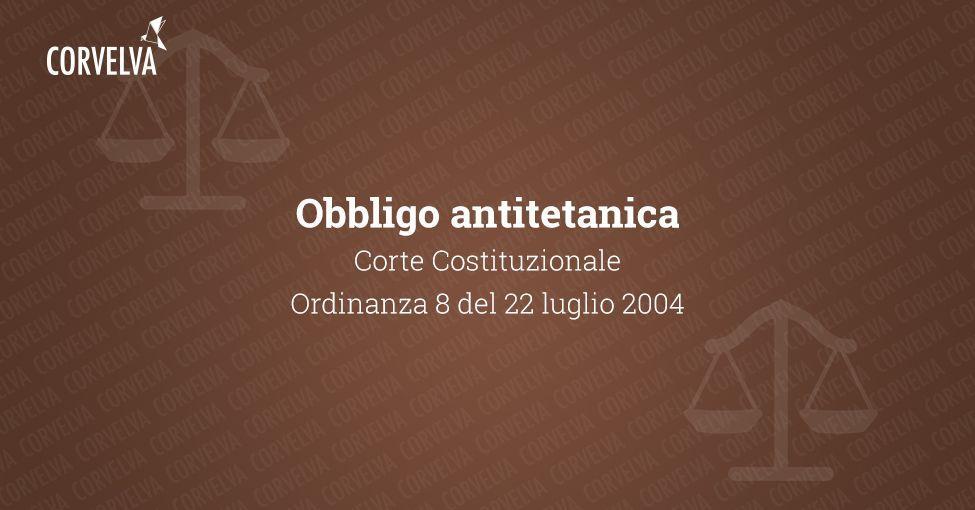 Given the act of intervention by the President of the Council of Ministers;

having heard the Judge Rapporteur Valerio Onida in the council chamber on 26 May 2004.

that the contested provision (indicated by the referring Court, by material error, instead of in art.1, letter c, in art.2 of law no.292 of 1963 - relating, in the current text, only to the extension upon request of vaccination tetanus to pregnant mothers -, but which is unequivocally deduced from the text of the ordinance) establishes the mandatory nature of the tetanus vaccination for new born, for which it provides three vaccine administrations, the first in the third month of life, the second after 6 -8 weeks from the previous one, the third to the tenth-eleventh month of life;

whereas the remitting Court states that the risk for children of contracting tetanus would be extremely low today compared to the time when the obligation to vaccinate was born; whereas this obligation does not exist in most EU countries; that in recent times there has been a vast movement of opinion against the compulsory vaccination; that the obligation in question had been excluded by art. 9 of the legislative decree 7 January 1994, n. 8, later not converted into law, and that the dPR January 26, 1999, n. 355 would have provided for the "freedom of school attendance" for unvaccinated pupils, so if the vaccinations are not practiced, even if formally compulsory, "absolutely nothing" would happen (in reality, art. 47 of Presidential Decree 22 December 1967, n. 1518, as amended by art. 1 of Presidential Decree 355 of 1999, it merely establishes that the failure to certify the compulsory vaccinations does not imply the refusal of admission of the pupil, but only the reporting to the competent authorities "for appropriate and timely interventions") ;

that the referring court states that they have to face a parental refusal to tetanus vaccination mandatory by law "not based on a preconceived and unjustified opposition to vaccination", as the parents ask to "explain why if the tetanus vaccine containing mercury is deemed potentially dangerous from a scientific-sanitary point of view, so much so that it will have to be withdrawn from the market by 2003 (Ministerial Decree 13.11.2001, in the Official Gazette 19.3.2002, n. 66), it is not legally so today - in 2003 - in which the their child should hire him, but he will become one only from 1.1.2004 ": so the remitting Court believes that it cannot limit itself to weakening the parental authority, in order to remove or overcome decisions of the same considered prejudicial to the minor," because - while a preconceived opposition to all vaccinations can certainly be considered prejudicial [...] - it is not the opposition motivated on sanitary reasons of good sen I know ", and therefore" the relevance of the problem "would exist;

which, postulating art. 32 of the Constitution the necessary reconciliation of the right to health of the individual (also having a negative content of non-subjecting to unsolicited and not accepted treatments) with the interest of the community, the compulsory health intervention would, according to the referring Court, justifiable only if public health is endangered;

that therefore the main criterion for establishing "the limits of individual self-determination (a right equally of constitutional rank ...) with respect to the obligation imposed by the law" would consist "in the danger of the situation for the individual alone or for the whole community"; and no danger to the community could derive from the fact that the individual does not get vaccinated against the risk of tetanus, because this is not a diffusive disease but only an infectious one, that is, which is not transmitted by contagion;

that consequently the compulsory vaccination could exist only if tetanus were, instead, a diffusive disease;
that the President of the Council of Ministers intervened, concluding that the question was inadmissible and in any case groundless;

that, according to the Tax Attorney, the question would be inadmissible in the first place due to lack of motivation on the relevance, since the referring court failed to reconstruct the facts of the case, and the object of the judgment itself remains unclear;

that the question raised, "albeit worthy of the utmost consideration", would however, as formulated, manifestly unfounded, since the fact that the tetanus vaccine containing mercury is destined to be withdrawn from the market would have no relevance in its assessment , as there has been a technical assessment of the prevalence of the benefits of vaccination over the marginal risks of using a vaccine, the danger of which would be lacking any evidence;

that, as regards the more general problem of the limits of compulsory health treatments, the Advocacy refers to the judgment of this Court no. 258 of 1994, in which, while affirming that the correct balance between the protection of the individual's health and the protection of collective health would make it necessary to identify with the greatest possible precision the complications potentially deriving from vaccination and the tools to predict their concrete verifiability, notes that an intervention by the legislator would be necessary, which the Constitutional Court could not replace, with consequent inadmissibility of the question, which should also be held in the present case.

Considering that the remitting Court has to judge on the appeal against a judicial measure adopted against the parents of a minor who had refused to subject their child to one of the tetanus vaccine administrations as part of the vaccination required by law;

that the referring court does not clarify whether the parents' opposition to vaccination is motivated only by the conviction of the illegitimacy of the relative legal obligation or by the attached danger in concrete, for the minor, of administering the vaccine, due to specific clinical conditions, attributable to previous administrations (as it would appear from the judicial documents), or due to the fact that the vaccine in use contains mercury, whose dangerousness is disputed;

that, in the case of opposition motivated by specific health conditions of the minor, the juvenile judge should carry out the necessary technical-health investigations, to verify the validity of the opposition, it being clear, also according to jurisprudence, that vaccination must be omitted or deferred in the case of ascertained concrete dangers to the health of the minor;

that, in the case of opposition motivated by the attached danger of the vaccine in use, it would be a question of evaluating, on the basis of proven technical-scientific elements, the validity of this allegation, also taking into account that the ministerial provision indicated by the remitting (art. 1 of the ministerial decree of November 13, 2001, as replaced by art.1 of the ministerial decree of June 27, 2003) shows only a medium-term program to replace one type of vaccine with another, and not the affirmation of a concrete danger of the vaccine in use, which would have required immediate withdrawal from the market;

that in any case, in order to appreciate the extent and the basis of the obligatory nature of the tetanus vaccination to be practiced for new born, with respect to which there is a refusal of the parents, it is not sufficient to argue, as vice versa the remitting does, based on the only non-diffusive character of the disease: in fact, the consideration of the risk deriving to the same minor from the omission of vaccination cannot be extraneous to the evaluation given to the judge, given that, in the case of the minor, his / her self-determination is not at stake, but the power-duty of parents to adopt suitable measures and conduct to avoid prejudices or concrete dangers to the health of the same minor, since it is not possible for the parents to have total freedom to make choices that could be seriously prejudicial to the child (see sentence no. 132 of 1992);

that the referring court omits any consideration in this regard;
that therefore the ordinance is deficient in terms of motivation on the relevance of the question, which is therefore manifestly inadmissible.
Given the articles 26, second paragraph, of the law of 11 March 1953, n. 87, and 9, second paragraph, of the supplementary norms for judgments before the Constitutional Court.

So decided in Rome, in the seat of the Constitutional Court, Palazzo della Consulta, on 8 July 2004. Gustavo ZAGREBELSKY, President