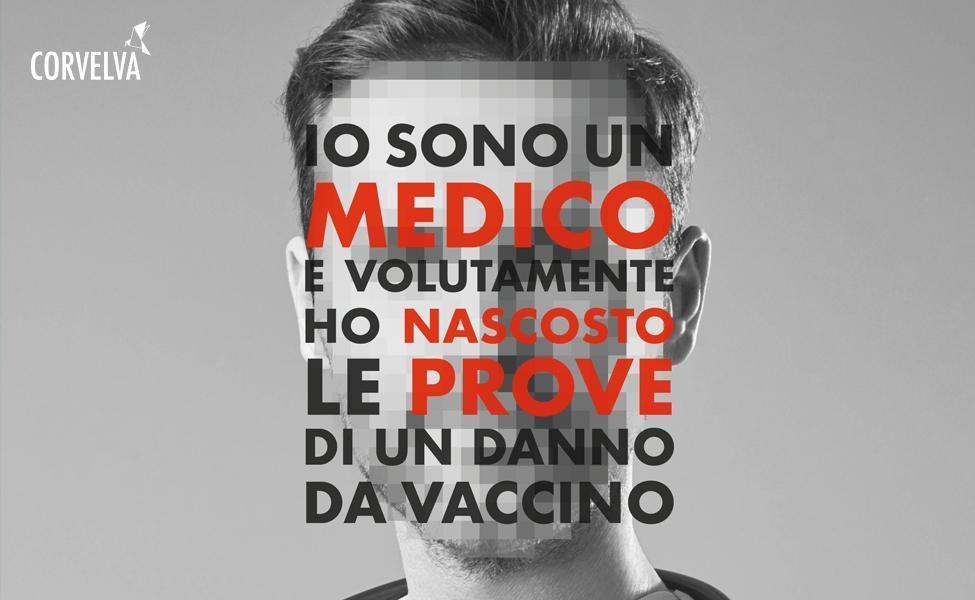 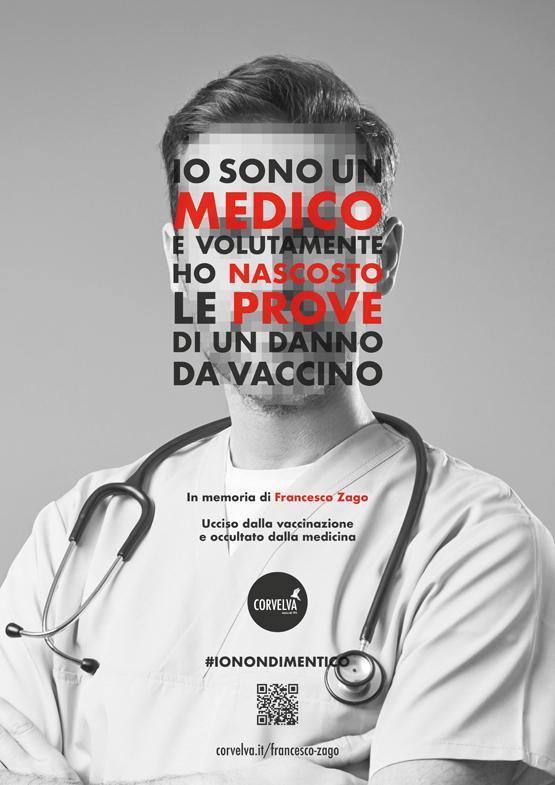 Little Francesco was born very healthy, a really nice 3.115g baby. Firstborn of the Zago family, born at the end of a wonderful pregnancy, natural birth, breastfed, in short, a normal child in a normal Venetian family.

At 2 months and 20 days, on September 17, 1997, Francesco received his first hepatitis B, DTP and Polio Sabin vaccine and in the following hours he immediately proved restless, whiny and ate with great difficulty.

In the following days he continues to get worse, he often cries and detaches himself from the breast as if the air were missing, a sort of cold but without the clogged airways.

The situation becomes increasingly worrying every day and the symptoms get worse and tend to increase.

The crying had become almost incessant, the eyes showed a strabismus, the feedings were prolonged for a long time due to the constant detachments due to apneas; the gestures that before he began to make, such as smiling, grasping the first objects or keeping his head straight, were now gone.

In the 30 days following the vaccination, visits followed by the pediatrician of free choice and by two different private pediatricians, none of whom noticed anomalies, for them it was the mother who was too anxious, they claimed that the child was well and as a cure they prescribed of various kinds of calming substances.

Paola now saw little Francesco regressing dramatically; no longer did the small gestures that a few days before the vaccination began to do, the normal gestures of a baby of a few months were absent, smiles absent, look absent, something was and was something serious. Concerned, the parents called a pediatrician who had already visited the baby and a bizarre diagnosis was made there: blindness. The pediatrician reiterated that the baby was healthy for her and in any case the problems she presented were due to either blindness or decay, so she advised them to start weaning with baby food. Little Francesco was just under 4 months old.

On Saturday 26 October 1997, 40 days after the vaccination, the parents of little Francesco decided to investigate further and take him to the hospital.

The situation was serious to say the least, Francesco - remember that he was a few months old - was crying with a continuous lament, his voice almost suffocated, his eyes were cross-eyed and vibrated, he no longer ate. The clinical picture was worrying and the anguish of the two parents was excruciating.

From here, from 26 October 1997, everything "was a real farce", as Francesco's mother told us.

The family had immediately informed the operators that the first symptoms had started immediately after the vaccination, to all the doctors who came in contact with Francesco it was repeated that, at a temporal level, the first problems had arisen from the day of the vaccination, but this hypothesis it was continually discarded because the entrance to the hospital was too far from the date of administration of the vaccine, in short, it did not matter if the symptoms had arisen immediately, the date of access to the hospital mattered.

On October 27, an MRI was performed on little Francesco and the following conclusions were reported in the examination:

"In view of the clinical history, the picture is compatible with post-vaccine myelitis brain"

No doctor and no nurse has ever informed the family of the outcome of this examination, kept hidden for months and discovered by the parents only after Francesco's discharge by leafing through the medical record. All the health personnel, in the days when Francesco was hospitalized, reiterated that the cause of the child's illness had to be sought in a metabolic disease, or a virus, or a tumor and, this we would like to emphasize, many tests performed on the little Francesco went to look for one of these causes.
We are not doctors and we cannot have certainty after so long, but the doubt of a diagnostic obstinacy, in this specific case, seems plausible and terrifies us at the same time.

Francesco's therapy was cortisone, an important mix that in some moments also seemed to give slight results if not that, after the umpteenth injection, the baby went into a coma for 20 days.

During the hospitalization, the Zago family had come into contact with Ferdinando Donolato, President Corvelva, who listening to the whole story had made a bridge between the Zago and dr. Montinari.
At the time Montinari did several conferences in Veneto so his timely intervention was quite simple.

An anecdote seems important to report to you: dr. Montinari, the Zago family and the doctor who was treating little Francesco in the hospital, found themselves in the same room behind closed doors. Neither the family nor Dr. Montinari had had access to the first magnetic resonance imaging and in any case in this private meeting behind closed doors the clinical diagnosis suggested by dr. Montinari to the hospital doctor, that is, a vaccine damage, was confirmed by the doctor himself. It was the only private moment in which with a brief nod of the head a doctor from that hospital where Francesco was hospitalized, confirmed the causal link between vaccination and pathology.

We were therefore in front of a clinical report with a clear diagnosis, performed the day after admission; an external doctor who had suggested vaccination damage after a couple of specific tests; and yet the version that all hospital staff continued to plead is NOT THE VACCINE.
Nothing changed and no investigation had stopped and moved focusing on that possible cause.
The symptoms did not improve, a respiratory arrest with intubation and ventilation, pain and worry, a situation that only by imagining it creates agony and that we will avoid detailing.

At home Francesco Zago was now fed with a nasal-gastric tube, had continuous apneas, no movement of the body and no longer emitted any sound, the damage was done and the result was now almost predictable.

Sunday, March 1998, XNUMX, after a cardio-respiratory arrest, Francesco left us.

The complete denial of vaccine damage, a possible diagnostic obstinacy and an unbridgeable pain are only part of this sad story.

The Zago family had relied on local realities that fought for the freedom of choice and had undertaken the process for the recognition of vaccination damage by Law 210/92. Subsequently it was Condav, with Nadia Gatti who followed the Zago family. Four years later, the positive outcome came. The process was neither short nor linear, some obligatory solicitation and a lot of patience to then see what we all know. In the report of the Hospital Medical Commission (Military) the death was clearly attributed to vaccination, as well as to the magnetic resonance imaging performed in the hospital, also due to the fact that, both in the American VAERS (Vaccine Adverse Event Reporting System) and in the literature are reported numerous cases of post-vaccination demyelinating encephalopathy.
What does this mean? Simple, almost no doctor who visited little Francesco, neither the pediatricians nor the health workers of the hospital where he was hospitalized, had the least medical and scientific training on the recognition of a vaccine damage, or whoever had probably hidden it evidence.

Justice is done? Yes, in a normal country, if by justice we mean the very slim consolation of seeing a death recognized by law, but justice was not done in Veneto, the region of Italy that hosts Canale Verde. Here justice does not exist, for Veneto, for Canale Verde, Francesco Zago never died from vaccinations; according to the state, directly through a medical commission yes, but for the Venetian system no.

Francesco Zago, Emiliano Rapposelli, Marco Scarpa, we will not forget you. Corvelva, who with all of you has tried to make you have that minimum of justice to be mentioned in those cold statistics, known as "Green Channel Relations" and taken as reference from all over Italy, will continue his battle to bring your deaths back to official reports because a Region and a State cannot be considered advanced and civilized if they deny and conceal deaths, especially if they are children.

PS Years later the Zago family had 2 other wonderful children, one of the two, the eldest, found himself dealing with the vaccination requirement. The Zago family, with the human support of Corvelva, took all the necessary actions to face the delicate path to avoid the repetition of the tragedy suffered.

On the one hand an imposition of law that would have led to the weakening of the parental authority and on the other the precautionary principle.

The Zago family had lost a child to vaccinations and once brought to the Juvenile Court the whole file concerning the pathology that had literally killed their firstborn.

The judge ruled: "no particular reasons are justified by the parents which justify the omitted vaccination and the observance of the vaccination obligation".

Yes, it was not a "particular reason" to have donated the first-born to the altar of medicine: the parental authority was weakened for the Zago spouses.