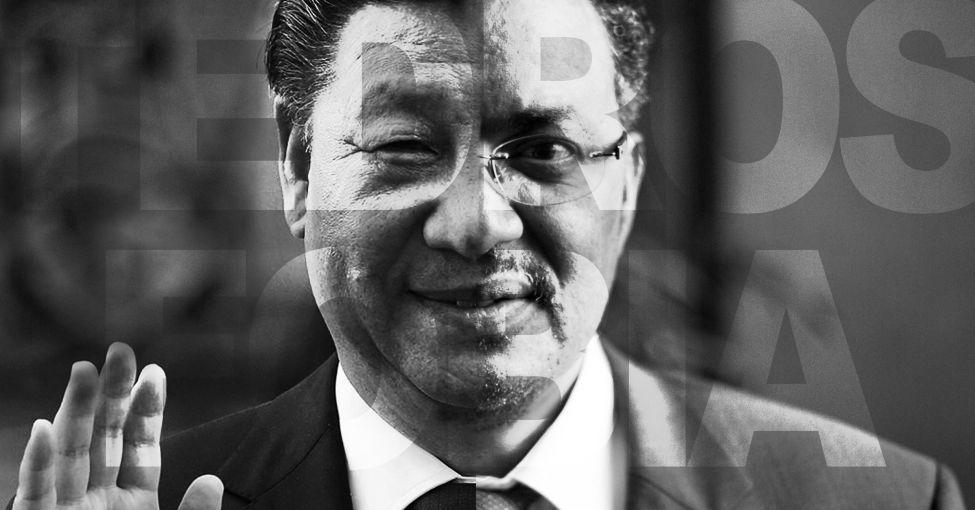 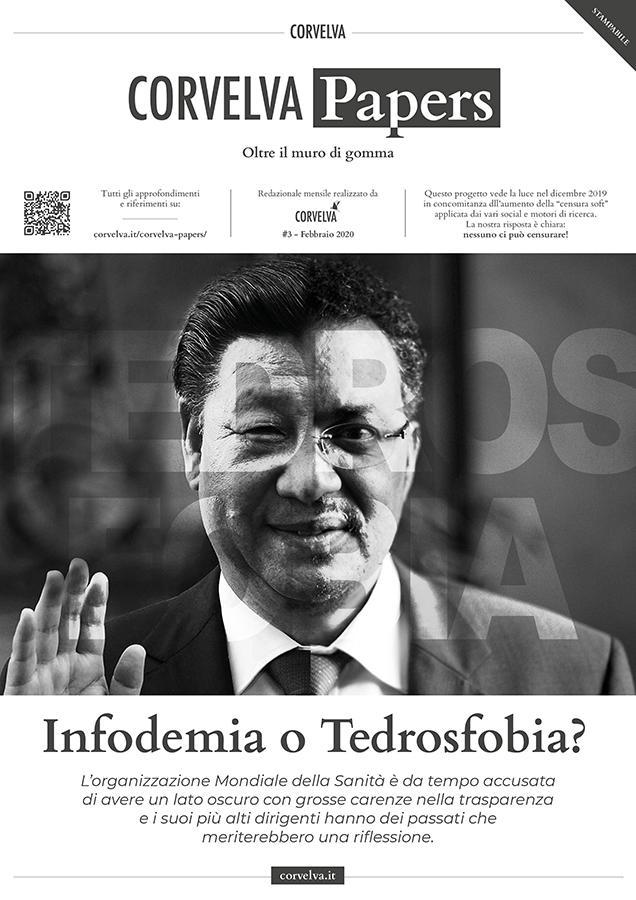 As was to be expected, the Wuhan epidemic brought the issue of countering fake news back to the bench and, to do so, it was the World Health Organization coining the neologism "infodemic".[1]
The will is clear enough: to convince that the greatest danger for global society in the social media era is the deformation of reality with the consequent need to manage communication regarding health emergencies, in order to identify and contain the propagation of fake news that, according to them, hinder the retrieval of information produced by the scientific and health community.

There would be a comedian in this neologism if it were not for the fact that all the actors in the field, including the Chinese government and the World Health Organization itself, seem to have enormous problems of credibility, transparency and impartiality ... starting from the Director General of the WHO , as we'll see.

The election of Tedros Adhanom Ghebreyesus as WHO general manager dates back to 2017. The events that see him involved are part of a much broader framework, within which the WHO certainly does not stand out for transparency and absence of links from the bearers of interest. One thing above all: dand the 2,03 billion euros collected in the form of voluntary contributions, half derives from payments made by states and half from private entities. Among the most generous private lenders, the foundation of Bill and Melinda Gates (207 million) and Gavi (143 million - consortium of public and private subjects that promotes vaccination campaigns and of which the spouses Gates are the main shareholders) stand out. Scrolling through the list, moreover, you can find numerous other foundations and also pharmaceutical companies. Already with these premises, the independence of the WHO appears with a big question mark in the background.

But who is this Dr. Tedros, who runs the WHO? He is an Ethiopian doctor, who is also accused of covering three cholera outbreaks when he was Minister of Health in his home country.
The accusations did not come from some conspiracy site, but from relevant international newspapers, such as the New York Times [2], who reported the complaint from global health expert Dr. David Nabarro. The facts, according to what began to leak in the media, concerned the cholera epidemics of 2006, 2009 and 2011, years in which the Ethiopian government, while detecting at least 60.000 infections per year of watery diarrhea[3] (as in cholera), continued to refuse to declare a health emergency.[4] At the root of the refusal to declare the emergency was the fear of the economic repercussions deriving from the decrease in tourism and exports.
In Ethiopian cases, the intervention of the United Nations was fundamental which, with laboratory tests, showed that people were dying of cholera and that, therefore, the infections were being covered up.
As a side note, it should be remembered that the choice to elect Ghebreyesus as WHO Director-General, in our opinion, should have taken into account the Ethiopian political context. Dr. Tedros. From 2012 to 2016 he had in fact been Ethiopian Foreign Minister, during the period in which, following a series of popular protests, the government had been guilty of imprisoning many protesters with a harsh repression by the police that had caused at least 500 dead[5] and many local activists denounced many more, including rape and other aberrant acts on the edge of ethnic cleansing.[6] Ethiopia, to conclude the Tedros chapter, also appears in the recent report [7] of the 4 U2018 Anti-Corruption Resource Center, in which it was described as a country with high corruption and persistent human rights violations, which caused widespread unrest in Ethiopia in 2015, a period in which our Dr. Tedros he was Minister. We absolutely do not believe that Ghebreyesus is the cause of this rampant corruption and not even of the violent repressions on the Ethiopian people, but the major problems of transparency of the WHO on previous pandemics[8] were not resolved with the choice of this general manager.

We now come to the management of the coronavirus epidemic that is raging in China and on the pages of tabloids around the world. As of the date we write, February 10, 2020, the epidemic has over 900 deaths and 40.573 confirmed infections.[9] From the beginning we conspiracy - so they like to call those who raise doubts about the data provided by institutional communication - we noted[10] that some mainstream media had emphasized some noteworthy coincidence, such as the recent opening (2017) of the first Chinese laboratory, with a BSL-4 security level, just in Wuhan, which worked on the SARS virus (which is a coronavirus). But this aspect takes second place (for now) compared to the question that has the most meaning for us here: Tedros Adhanom Ghebreyesus and Xi Jinping, respectively the WHO Director-General and the President of the People's Republic of China, have really managed promptly the epidemic?

theWorld Health Organization has publicly broken a spear in favor of the Chinese Dragon, praising the emergency measures implemented by Xi Jinping. This, for the Chinese government, has the same value as a medal which, however, was stained immediately afterwards, when the news of a 34-year-old ophthalmologist, Dr. Li Wenliang, who died recently due to Wuhan's coronavirus, came out. which first raised the alarm, as early as December 2019. The BBC[11], recently, he has told his story from when he sent a message in a chat between colleagues warning them of the danger and suggesting to adopt the necessary protections to avoid contagion. The screenshots of those private conversations began to turn and the doctor's name went to the Wuhan police, who accused him of defamation.
This attitude, which must be said to be the only one who arrived in the western press, and Dr. Tedros' applause for the style of the Chinese government in the management of the epidemic, has led to the relationship between the detractors being magnified Tedros and Beijing. According to the Asian Review,[12] "Rumors in diplomatic circles report that China's weight in the global economy and WHO itself may have played a role in the agency's decision. postpone the decision to declare an emergency ". The intent seemed to be to earn a few days, allowing millions of citizens to travel on the occasion of the Chinese New Year but, on the other hand, increasing the risk of spreading the virus outside Wuhan. Asian Review cites diplomatic sources from WHO headquarters, resentful because the alarm would have been given "too late". Another informant, this time from Beijing, explained to the Asian newspaper that "ties between China and the UN are very close, since China is the second largest UN financier on a global scale."

That's not all: the Italian newspaper La Verità[13] she has already pointed out that Ghebreyesus' predecessor, Margaret Chan, coincidentally is of Chinese nationality, and had been nominated for the post by her government after facing the Sars epidemic in 2003. In addition, Beijing is one of the most generous financiers of Ethiopia, the country of origin of Dr. Tedros.

The Sars epidemic, the acute respiratory syndrome of 2002-2003, which recorded 774 victims, also recorded very serious delays and a systematic cover-up by the Chinese government on the very existence of the sars virus. As early as mid-November 2002, a missionary reported strange deaths from "lung plague" to the agency for infectious disease control in Atlanta. The World Health Organization and the CoC launched an investigation, but the Chinese government assured that the problem had been resolved and the cause of those infections was a bacterium, Chlamydia. It was not until February 2003 that the WHO received a report from the Minister of Health in which he finally spoke of acute severe respiratory syndrome.

In our opinion, everything we have told you serves to better understand the management of the coronavirus epidemic that is raging in China. Ghebreyesus' applause for Xi Jinping's initial management led to an underestimation of the problem with serious implications for the global economy. The Coronavirus maintains a low mortality but it is impossible to trust Chinese data especially in light of the fact that the Health Commission of Wuhan it even stops giving updates on the infection, because the bureaucracy imposes certain steps: each test must be confirmed in Beijing (ie the central government), and it takes five days to do it: a huge and inexplicable "hole" given the emergency of the health situation.[14]

We conclude this editorial with a rhetorical and provocative question: in the light of what we have told you, do you still have confidence in the work and transparency of WHO and China regarding the Wuhan epidemic?