The master of the world 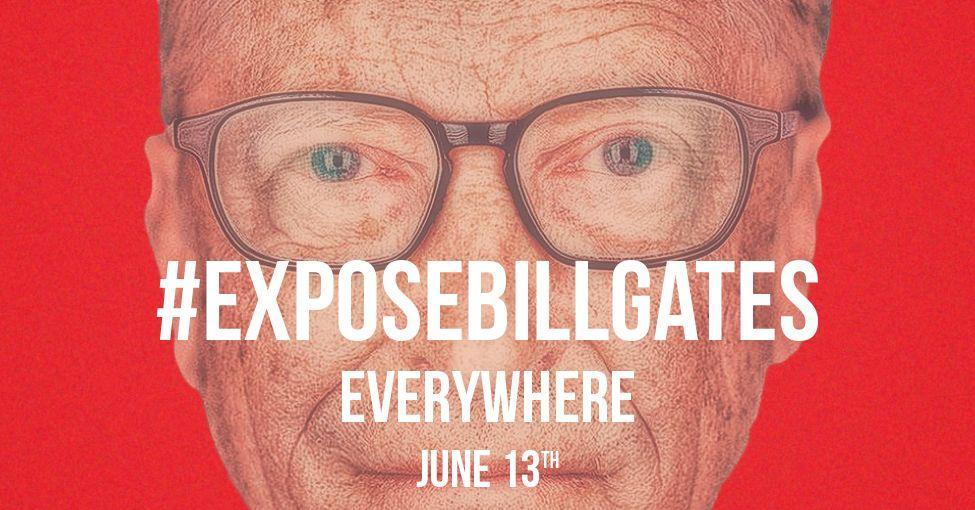 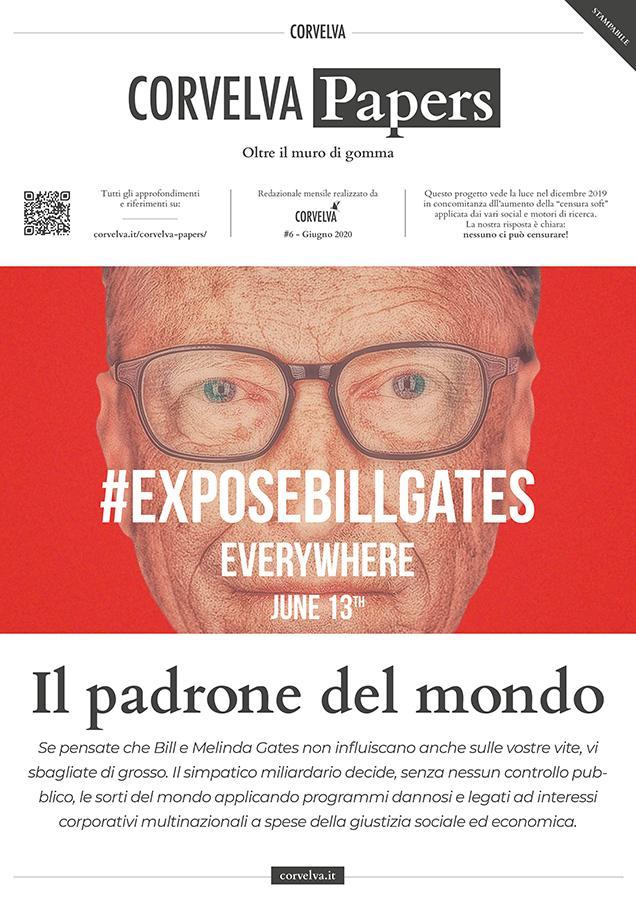 If you think Bill and Melinda Gates don't affect your lives too, you're wrong. The friendly billionaire decides, without any public scrutiny, the fate of the world by applying harmful programs linked to multinational corporate interests at the expense of social and economic justice.

The World Health Organization is the most important global authority for public health. Such an important institution should promote a vision of healthcare capable of responding to the collective interest and, above all, of finding solutions with the utmost respect for the principle of transparency, but this transparency does not seem to harbor in the WHO.

In the 2016-2017 two-year period, it used a budget of almost 4 and a half billion dollars, of which 87% was financed by private contributions which covered the gradual withdrawal of state funding. These funds are largely tied to the realization of projects commissioned by the donors themselves. There is talk of earmarked funding, that is conditional on compliance with a specific agenda and as can be seen from the data of the British Medical Journal, "In 2017 80% of the funds received by the agency were earmarked". The worrying thing is that these projects do not always coincide with WHO planning, nor with the priority needs of the international health agenda and the progressive privatization of the agency, with projects commissioned by the donors themselves, is leading to being made a service provider of companies or private foundations. But there is more.

A few days ago, Rai 3's Report broadcast revealed an interesting detail: Bill Gates made significant investments in 2018 for over 320 million dollars in the health sector through a trust connected to his foundation. We are talking about a considerable amount if you consider that he finances the WHO for 500 million dollars every two years. According to German Velasquez, a former WHO member interviewed by Report, the importance of Bill's contribution to the UN agency would have made him "the master of WHO". Alfonso Scarano, independent analyst always interviewed by Report, in reference to the economic relations that gravitate around the Bill & Melinda Gates Foundation, declares that "The Trust invests and generates the mass of money that then goes to the foundation and it is important figures, over 5 billion dollars, and the foundation at this point gives this money".

Not least, given what Report found, here are the statements of James Love, director of the NGO Knowledge Ecology International, where he accused Bill Gates of having "made a fortune by defending the intellectual property" of patented drugs, severely penalizing countries poor thanks to the fact that "its foundation promotes the development of patented drugs and vaccines at the expense of generic products" which have a significantly lower cost. Important personalities and institutions linked to the world of health also had the opportunity to express themselves on the limpid role of Bill Gates. In 2013, Doctors Without Borders, accused Gavi, of issuing the Bill Gates foundation dedicated to immunization campaigns, of imposing artificially inflated prices for vaccines on recipient countries, which ended up feeding gifts to multinationals such as Bayer and Novartis.

Seen in this way, the picture would be worrying: if Gates, the richest man in the world, with the ability to decide planetary health strategies through the influence exerted on the World Health Organization, has the ability to convey plans to deal with those diseases more profitable for some pharmaceutical companies, also by virtue of a "protection" of their pharmaceutical patents, the conflict of interest would be enormous.

The suspicions about conflicts of interest are more precise thanks also to Antoine Flahault, director of the Institute of Global Health of the medical faculty of the University of Geneva, who declared that between 2016 and 2017, WHO earmarked 894,5 million dollars for the fight against polio, a disease now rendered harmless, 10 times more than AIDS prevention, which is the fourth leading cause of mortality in poor countries ". "The WHO is now forced to take into account what Gates considers a priority, such as in the case of polio," continued Professor Flahault. If in 1970 80% of the WHO budget was made up of contributions from Member States and 20% from private individuals, as we have told you, today the ratio is the exact opposite, with the result that entire departments of organization are funded in full by the Bill & Melinda Gates foundation. "This inevitably has an impact. Not so much on what the WHO says but, rather, on what it fails to say", Nicoletta Dentico, director of the Geneva NGO, Health innovation in practice.

Jean-Marie Kindermans, president of the European Agency for Development and Health, said that "if there is a real problem, the WHO is about how resources are allocated", now bound and forced to depend from the logic of the "capitalist philanthropy" complex, as Peter Buffett called it, son of the wealthy financier Warren.

As Buffett said, philanthropy is becoming a huge business, but global inequalities continue to grow, "and other lives and communities are being destroyed by the system that creates immense amounts of wealth for the few," while the work of organizations like l 'WHO is bound to the wishes of a few individuals. And the dark side of the "benefit-industrial complex" manifests itself in the context of campaigns such as that for vaccinations, which are diverted in favor of a limited concentration of companies and see the funds dedicated to them as directed without any principle of efficiency and effectiveness. While the WHO's ability to act is sacrificed in the name of the "conscience wash" of Bill Gates and his wife.

Precisely in this regard, it comes to mind when in 2016 similar accusations came from the British NGO Global Justice Now that at the end of the Economic Forum in Davos when a report was unequivocally entitled: "Gated Development - is the Gates Foundation always a force for good? ". The GJN had found that the Bill and Melinda Gates Foundation programs were not subject to independent or public evaluation and beyond, the report claimed that the Gates foundation programs were - overall - detrimental in promoting economic and global development, related to multinational corporate interests at the expense of social and economic justice. A strategy focused on cooperation with the multinationals themselves often responsible for much of the poverty and injustice that already afflict the southern hemisphere.

If you think that all of this doesn't affect your lives, you are wrong. The sympathetic globalist billionaire is making a lot of money thanks to Covid-19. The Bill & Melinda Gates Foundation Trust has invested in The Mexico Fund, a fund that concentrates investments in that country. In recent weeks this fund had suffered a 42% collapse on the New York Stock Exchange due to the pandemic and Gates was thus able to buy, at a discount, a 5% stake in the entire fund to become the fourth investor. Let me be clear, this is not illegal, it is only the capitalist attitude promoted by that small number of people, less than 1%, who holds more than half of the planetary wealth, in fact the architect of that imbalance that they are so much trying to remedy. But the two things struggle to coexist because Gates is both an entrepreneur / speculator and one of the major financiers of the World Health Organization, able to advise governments around the world on issues related to epidemics and pandemics and if we look closely at the issues of declared pandemic, we realize that another factor takes over that has influenced our lives in a more than direct way. WHO did not always see the coronavirus as a pandemic, indeed, until mid-January it even denied the passage of the virus between man and man and it is a fact that the official announcement of the pandemic arrived the day after Gates bestowed a large sum of money on the agency. But let's take a look at the timeline: on March 10, Business Insider wrote: "Bill Gates sounded the alarm about the coronavirus COVID-19, calling it a" pandemic ", although the World Health Organization has yet to give it that definition. . " But the article also announced more, namely that the Gates Foundation, Wellcome and Mastercard were pledging $ 125 million in funding for those companies that develop treatments for the new coronavirus, and it's just a coincidence that all those worldwide have been attacked. already patented or non-patentable treatments, in favor of new drugs and vaccines.

On March 11, a day after Business Insider reported how Gates had pushed for a WHO statement on the pandemic and a day after Gates announced the infusion of millions of dollars into a WHO partner venture, During a press conference on the coronavirus Tedros Adhanom Ghebreyesus said: "We have therefore evaluated that COVID-19 can be defined as a pandemic."

Coincidence? Maybe. But there is a lot of money, power and enormous influences and there is the fact that the purchase of the Mexico Trust shares, at the reduced price, took place on March 31, after the declarations of the WHO Director General.

We are not so puritanical that we do not realize that pandemics are an affair for many, "mors tua vita mea", and although it seems legal to us, it does not seem ethical and even less tolerable to be at the same time a businessman and savior in the same pandemic. Being a businessman, savior and even "master" of that entity that manages "public affairs" and in doing so by benefiting only the private interests of multinational corporations. We say no to this!