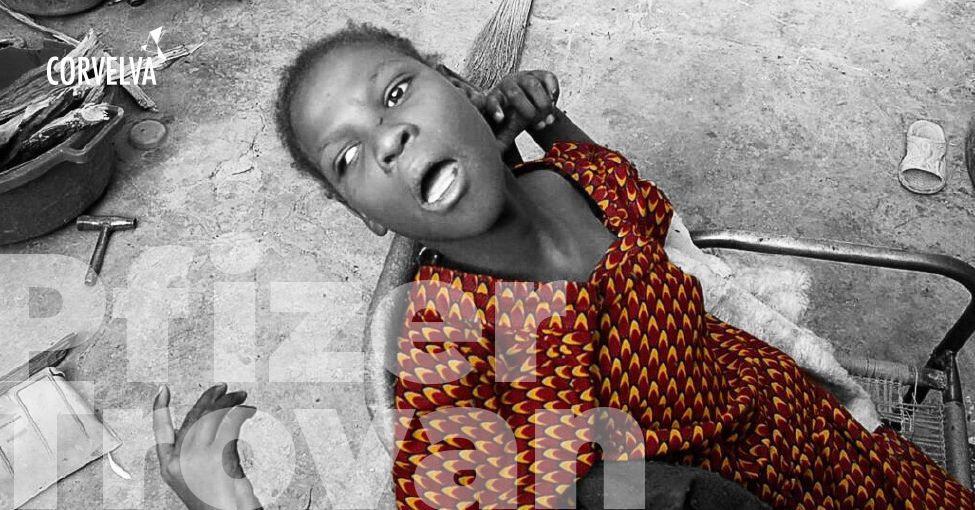 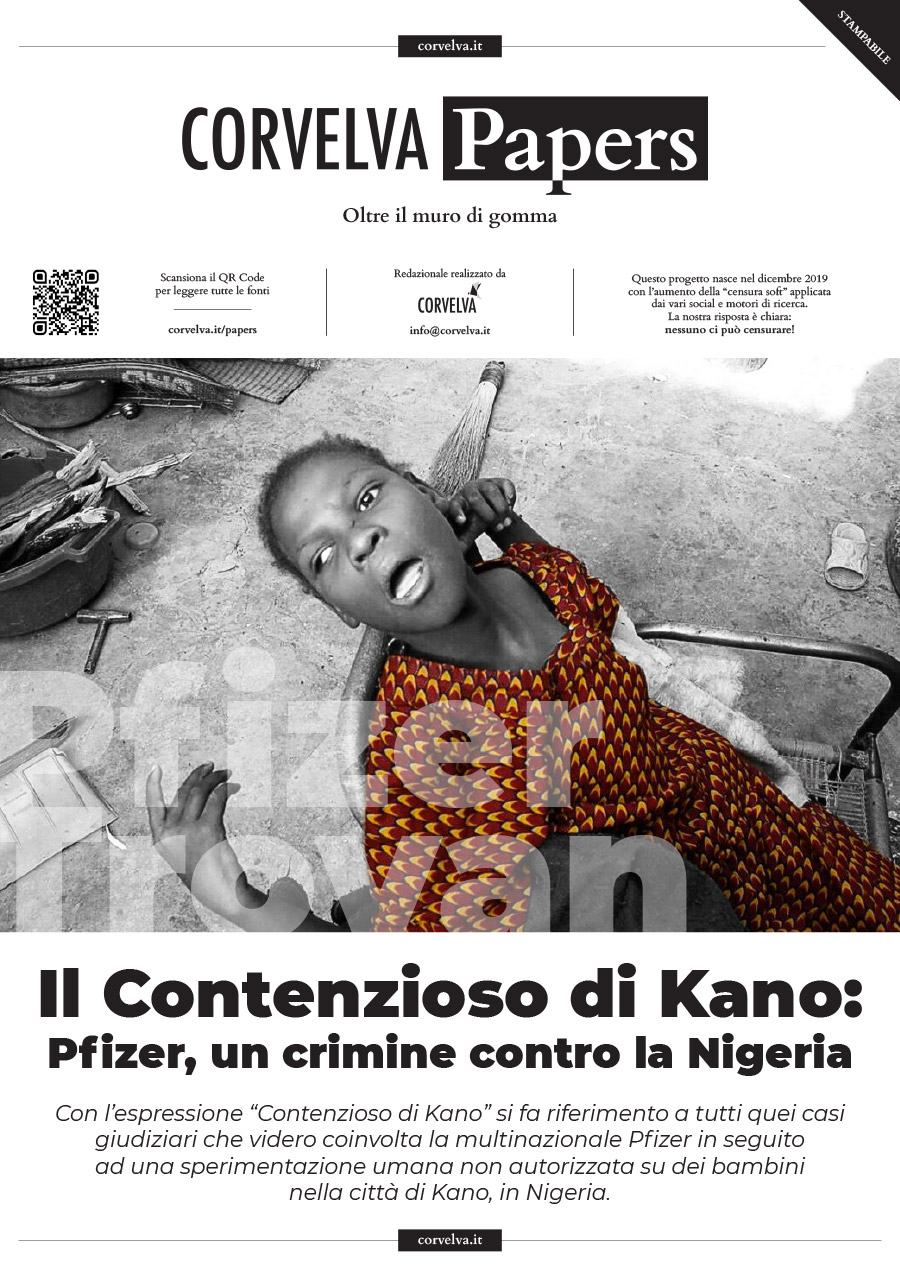 The expression "Kano litigation" expressly refers to all those judicial cases involving the multinational Pfizer following an unauthorized human experimentation on children in the city of Kano, Nigeria

The first half of 1996 marked the start of the most severe meningitis outbreak in Nigeria. It was a public health crisis for the government at the time. On April 3, 1996, a six-member Pfizer research team arrived in Nigeria and headed directly to Kano State to "treat" children with meningococcal meningitis.
Before their arrival, Doctors Without Borders operators were already providing free treatment with Chloramphenicol, the cheapest and internationally recommended antibiotic for the treatment of meningitis, but the arrival of foreign doctors who dispensed very expensive medicines for free, came seen by the population as the absolute salvation. As many documents unearthed, Pfizer was failing to find enough patients in the United States to test its new antibiotic Trovan, seen as a potential blockbuster by Wall Street analysts, so it was using Nigeria's meningitis epidemic to conduct. experiments on children whose lives hung in the balance, with a drug not yet approved in the United States.

Of the 200 children treated by Pfizer at Kano State Hospital, at least five died and many more were victims of blindness, malformations and paralysis.
The experimental antibiotic Trovan was subsequently put on the market in Europe but only for adults and in 1998, practically immediately thereafter, it was withdrawn from the market due to its high toxicity.
An exhaustive investigation conducted by the Washington Post and published in 2000 unearthed a report by the investigative commission on the Trovan clinical trial set up by the Federal Ministry of Health in Kano, in which it emerged that everything revolving around Pfizer's trial he had serious ethical, bureaucratic and deontological problems. For example, the lead Nigerian researcher of the trial, Isa Dutse, had given Pfizer an authorization from the ethics committee, the body that was to grant the human trial, backdated from the date on which Pfizer doctors had operated. Not only that, the same ethics committee that would have authorized Pfizer, had been set up at in October 1996, therefore after the trial itself. But there's more: in addition to the backdated false approval and an ethics commission set up after the trial, Pfizer never had parental written consent for the use of an investigational drug on their children, and even doubts were raised about the documentation. scientific experimentation. Also from the commission of inquiry, it emerged that three American doctors from Pfizer (Scott Hopkins, Debra Williams and Mike Dunne) did not have the authorization and qualification of the Nigerian Medical Council to practice in Nigeria.
Following the foreign media pressure due to many articles that dealt with the Pfizer trial, the then Minister of Health Nwosu set up the investigation commission on the clinical trial of the Trovan, with specific powers to investigate the facts of Kano. The commission recommended, among other things, that Pfizer be adequately sanctioned for violating the Medicines Ordinance, the Helsinki Declaration on Ethical Principles for Medical Research and the 1989 United Nations Convention on the Rights of the Child. experts from the commission proposed that the pharmaceutical giant make a formal and unreserved apology to the Nigerian government and the people of Kano in particular, accompanied by adequate compensation. We were not surprised to discover that the final report of the commission of inquiry was printed in only three copies, never made available to the public.

On August 12, 2011, The Guardian reported that the first winners of the 15-year legal battle against Pfizer were the parents of four Nigerian children who died in Kano. The families received checks for $ 175.000 from the Compensation Trust Fund. Subsequently, another series of victims was "compensated", for a total of about 14, leaving 186 out of the 200 total cases.
Pfizer, in the course of all the trials, has always maintained that its researchers went to Kano with a purely philanthropic motive, namely to fight the meningitis epidemic, but the Nigerian commission of inquiry had already totally rejected this ridiculous explanation. pointing out that Pfizer's doctors left while "the epidemic was still ongoing".

In finding the documentation related to the Kano Litigation, we realized that many aspects of the question remain very mysterious after years, however, thanks to a detailed research, we discovered something interesting, for example that Italy too had a role in this absurd dispute since between February and March 2009, Pfizer decided to settle the lawsuit with many of the 200 plaintiffs, the parents of Kano's children, in an out-of-court settlement. The agreement was signed in Rome and saw the former Nigerian military leader Yakubu Gowon (accused of genocide and war crimes) and Jimmy Carter (39th president of the United States of America from 1977 to 1981) as protagonists of the negotiations.
Subsequently, the state of Kano filed a civil and criminal lawsuit against Pfizer asking for compensation of $ 2,75 billion, which was also joined by the attorney general of the Nigerian federation, Michael Aondoakaa, in a separate suit for 6,5 billion. dollars.
In 2010 a US diplomatic cable, classified as confidential by economic adviser Robert Tansey and discovered by WikiLeaks, revealed a meeting on 9 April 2009 between Pfizer's country manager, Enrico Liggeri, and some US officials, where it was claimed that according to Liggeri , Pfizer had hired private investigators to uncover attorney Michael Aondoakaa's own corruption links in order to pressure him to drop the $ 6,5 billion federal lawsuit.. Liggeri, the cable continued, was aware that Pfizer investigators were passing this information to the local media in order to unleash a series of malicious articles on Aondoakaa, articles punctually released between February and March 2009.
In November 2010, just over a year later, Attorney Michael Aondoakaa filed the civil and criminal actions, effectively withdrawing the federal lawsuit, and struck a deal with Pfizer. The withdrawal of the case, as well as the terms of the agreement, are today a highly guarded secret by the parties involved in the negotiation. Attorney Michael Aondoakaa, deprived in 2010 of the rank of Senior Advocate of Nigeria by the Disciplinary Committee of Legal Practitioners on the basis of several petitions written against him, gave up his career and went on to become an entrepreneur / rice farmer in Nigeria.

Drugs, such as the antibiotic Trovan used fraudulently in Kano, cross borders due to a poor US government review in favor of a purely private review. The controller is the one who produces the drug, tests it, tests it and publishes the research. The scarce resources that the FDA allocates to oversee experiments abroad allow drug companies to pay doctors in Third World countries and Eastern Europe to test their drugs on thousands of human subjects. The alarming issue is that the FDA and EMA require by law that patients in all trials, regardless of where they are performed, fully express informed consent to the trial and, furthermore, use the data to produce results. scientifically publishable. These informed consents are part of the copious documentation that every pharmaceutical company must deliver to the various regulatory bodies in order to obtain approval for the marketing of a drug, but such informed consent was not there in Kano, just as it did not exist. in many other cases.

In addition to the tragedy and the human understanding for the pain for the victims of Kano, after having overcome the disdain for an experiment on children whose life was hanging by a thread, the question arises: how the FDA and the Do EMA approve pharmaceutical products if the documentation necessary for the approval itself is missing?