Pandemic. The business of terror 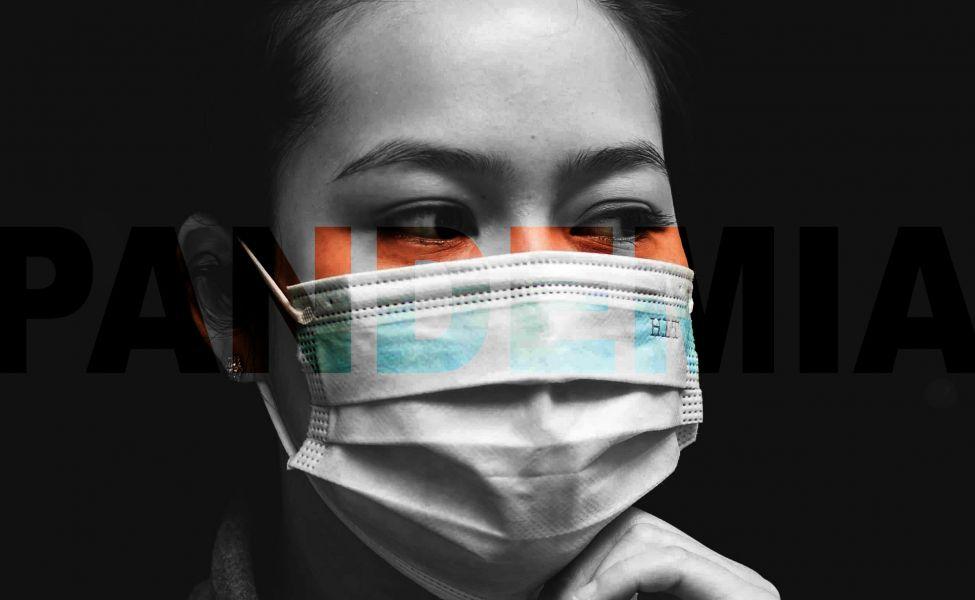 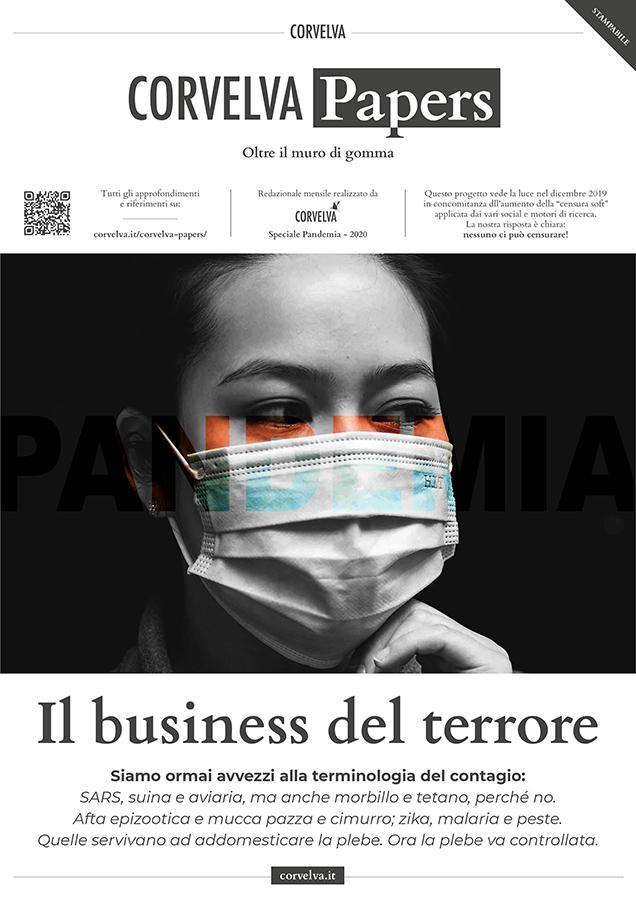 We are now accustomed to the terminology of contagion: SARS, swine and avian, but also measles and tetanus, why not. Foot-and-mouth disease and mad cow and distemper; zika, malaria and plague. Those served to domesticate the plebs; now the plebs must be checked.

It all started as suddenly as in the best video games or apocalyptic movies. The images of the affected areas that fill the news: papers fluttering in the air, figures in the background in white or yellow biohazard suits, overpopulated cities with now deserted streets, creaking respirators and lanes with crowded people, preventive measures and hasty commuters with masks… but this is not a movie: this is the biggest population control dress rehearsal.
The keywords today are few, but already well-carved in people's minds: Wuhan, Coronavirus and Pandemic. It takes very little to start this film, in the end the set has been well set up in the last 3 years with the issue of measles, the lies and ignorance of the politicians have created the ideal terrain and the media alarmism has done the rest but This time, something went wrong: the frame is too flashy and people ask too many questions.

We come to what we know of the situation to date, late January 2020, and shake off all those irrelevant details built by the director. Let's try to rattle off only the news that we are sure of, so as to try to "get" into the film and see the behind the scenes of this coronavirus pandemic, keeping in mind that things are evolving.

The first ascertained case is from 2019st December XNUMX[1]; initially it was just a strange viral pneumonia with no etiology that appeared around the fish market in Huanan, located in the sprawling city of Wuhan, central China. In a short time, in early January, the infectious agent, a coronavirus classified as 2019-nCoV, had been identified.
Fish, snakes, bats and mammals were the first suspects of the virus zoonosis and the analysis of the protein codes of the 2019-nCoV virus, carried out by a team of researchers from the University of Beijing[2], found that it was a recombination of the bat coronavirus with an unknown coronavirus; the hypothesis that the best incubation "tank" was the snake[3], cobra in our case, at least until researchers Ewen Callaway and David Cyranoski have categorically denied this possibility, with a well-condensed article of details and published in the scientific journal Nature.[4] From this moment the chaos of information reigned supreme and, between denials and leaks of news, we found ourselves having to admit that certainties are not found but coincidences, conversely, abound.
On February 26, 2017 an article was published in the scientific journal Nature[5] where the concern of a part of the scientific community was highlighted about the opening of a laboratory, the first Chinese with a BSL-4 safety level, right in Wuhan: the Immunology and Metabolism of the Medical Research Institute. Concern was also given by the fact that the SARS virus had already escaped several times from Beijing's high-level containment facilities [6] and, above all, the level of freedom and openness of the Chinese government did not allow us to be sure that these laboratories did not have a dual purpose, namely the research and development of biological weapons.

Still talking about coincidences, we have several sources that, in the past few days, have pointed the finger at the eventuality that the coronavirus was a military bacteriological weapon, escaped from the Wuhan laboratory.
Paolo Liguori, a well-known Italian journalist, recently came out on a newscast with statements[7] that were going in this direction.
Paul Martin, a former foreign correspondent now residing in Hong Kong, in an interview[8] with British MEP Nigel Farage, he accused Hong Kong governor Carrie Lam of lying about the real Chinese situation.
Dany Shoham, biologist and former Israeli military intelligence officer, bacteriological weapons expert in the Middle East and Asia, in an interview with the Washington Times[9] he spoke of the existence of a laboratory in Wuhan - considered the outbreak of contagion - where the Chinese government is carrying out a secret chemical weapons development program.
We stop here in citing the sources that open up to this scenario - already defined as a conspiracy by the same mainstream media that launched it, remembering that the concerns published in 2017 on Nature by the molecular biologist of Rutgers University of Piscataway, Richard Ebright, have become prophetic since it was added that the Chinese Communist Party itself refused to allow a team of experts from the Centers for Disease Control (CDC) and the World Health Organization to intervene in support of the Chinese pandemic.[10]
Indeed, from our point of view, it is almost reassuring that World Health Organization experts are not called into a (supposed) pandemic - and our memory goes to the major health emergencies sold as pandemics such as the mad cow, the swine, sars and avian. Planetary emergency plans, total war against this or that virus that could decimate the earth with all the economic repercussions that this entails: millions of vaccine doses - purchased with the money of the States - then thrown to the pulp, extreme security systems, tight controls where there would be no need, billions of euros or dollars in smoke, generalized psychosis. This became past emergencies. And, in the end, no real pandemics have yet been seen.[11]
There would be to write books on the WHO, but we just want to mention the investigation[12] of the 2010 of the British Medical Journal and Bureau of Investigative Journalism where it was clear that the main scientists who advised the World Health Organization to plan a flu pandemic had done a job paid for pharmaceutical companies, which were making money from the same guidelines they prepared. These conflicts of interest have never been publicly disclosed by the WHO, and the same archived the investigations into its management of the A / H1N1 pandemic as "conspiracy theories" (it is a pure coincidence that it is equally "conspiracy" to ask questions about the genesis of the coronavirus. Wuhan and the real situation in China).
In describing the current situation we feel a bit of hybrids, mythological figures halfway between the journalists who applauded Colin Powell[13] while waving the bottle of fake anthrax and the Resident Evil players grappling with the Umbrella Corps, but this is how we feel if we go back a little, to that October 18, 2019, the day theEvent 201 al Johns Hopkins Center for Health Security. On that day the big shots of the World Economic Forum and Bill & Melissa Gates Foundation, ready to host a global pandemic simulation.

This pandemic exercise of the highest level had the theoretical purpose of managing and reducing the large-scale economic and social consequences of a possible viral epidemic, and it is always and only a pure coincidence that the virus used for the simulation was precisely a coronavirus, with lots of nice merchandising given by small plush in the shape of a coronavirus.

It should be remembered, but it is always a pure coincidence, that in November 2013 the Bill & Melinda Gates Foundation financed the British Institute with 189,000 euros Pirbright.[14] In July 2015 thePirbright Institute it files the patent for attenuated coronaviruses to be used as a vaccine to prevent lung and respiratory diseases.

On January 24, 2020, from the official website of the Johns Hopkins Center for Health Security, they had to specify that their scenario "it was modeled on an imaginary coronavirus pandemic " and they have “Explicitly stated that it was not a forecast".
"We don't expect now that the nCoV-2019 epidemic will kill 65 million people. Although our tabletop exercise included a fake coronavirus". [15]
All this chaos has however given rise to a coalition, supported by the omnipresent Bill Gates, who is funding biotechnology research to develop vaccines against Wuhan's "deadly" coronavirus. We are talking about a $ 7 billion investment in a joint effort with the National Institutes of Health, to use its genetic drug development platform in the production of an experimental vaccine. The giant of biotechnology Gilead Sciences He is also considering re-proposing an experimental drug previously tested against the Ebola virus as a treatment for the Chinese strain.

In conclusion, we know about this pandemic too. We have so much information about it that, if put together, we realize that it is currently impossible to make predictions. In the worst case scenario, the Chinese military has "played" with SARS and a modified virus has "escaped" and now the great Chinese Communist Party is doing everything - and is highly capable - to hide information; in the best of cases, it is yet another example of fear marketing: an epidemic outbreak in an overpopulated area sold as the eighth plague of Egypt and this, given how it worked perfectly with measles, will probably bring state policy ex-sovereigns to take pejorative measures. Scientocratic states, linked to media fetishes, will quickly apply the electronic passport of vaccinations and industries, instead of devoting themselves to antivirals, medicines for sick people, will invest only in the new business of medicines for the healthy: vaccines.