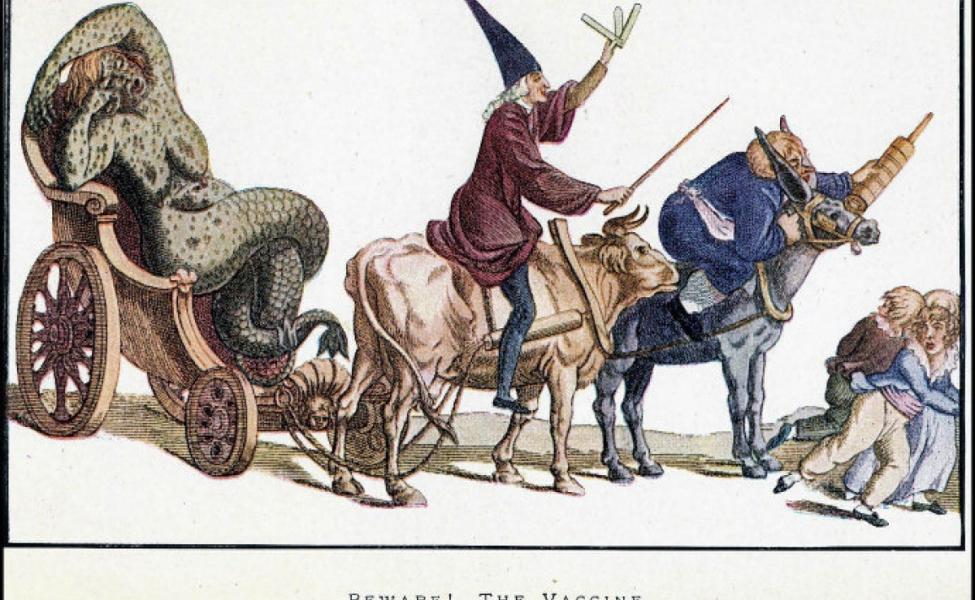 It was March 1885 and after a long cold winter the manufacturing city of Leicester in England was enjoying one of the first beautiful spring days.

Thousands from neighboring areas, surrounding towns gathered in protest against what they felt was an unfair law imposed by their British government.

Although smallpox vaccination had been in use since the 1800s, the government had not introduced any obligations before the decrees of 1840 and 1853.

The law of 1853 set up the governmental apparatus to require that every child be vaccinated within three months of birth. Through a series of laws over the years, the British government had, at the time of the Leicester protest, made it a crime to refuse anti-violent vaccination punishable by fines or imprisonment.

The «Vaccination Act»Of 1867 consolidated existing vaccine laws and instituted a fine for parents who had not presented their children for vaccination within three months of birth.

In spite of government action to ensure a very high vaccination rate, a massive smallpox epidemic hit not only Leicester but all of England and other parts of the world in the early 1800s.

The Leicester epidemic involved thousands of smallpox cases and hundreds of deaths, deeply shaking many people's confidence in the protective powers of the vaccine.

«The reflective observer must be struck by how singular it is that all the recent epidemics of smallpox have appeared among populations in which the laws that oblige the vaccine have been carried out with rigor and systematicity. 96% of new born babies in London are protected from the vaccine»(1884," Leicester Mercury ").

The laws were initially passed after people refused the vaccine once the negative consequences were noted. Subsequently, they had submitted to the new laws and yet were still affected by fatal smallpox epidemics. After that, more and more people had rebelled.

Although contrary to logic, the government had decided to increase the vaccination rate by resorting to health officials who would persecute parents who refused to vaccinate their children.

The fines fell disproportionately on the poor who, if they could not afford to pay the penalty for not complying with the vaccination law, would have been forced to compensate the payment due with foreclosures and the sale of their goods.

Due to the serious and sometimes fatal outcomes of the procedure and the government's decisive support for forced vaccination through fines and arrests, people were motivated to revolt. In large numbers they flock to the streets of Leicester to protest ...

At the time of the demonstration, thousands of criminal procedures were conducted against parents who refused vaccination for their children.

It was a festive atmosphere with music and hundreds of flags and banners unfurled saying things like "freedom is our birthright and freedom is what we ask for","oppressive laws make people unhappy","the three pillars of vaccination: Fraud, Strength and Madness", is "We no longer beg, we demand control over our children."

Both the sets and the mottos were very copious. One represented an effigy of Dr. Jenner with the inscription "infanticide", another was an entire funeral procession which consisted of a coffin on an open catafalque, mourners, etc., and the inscription "Another victim of the vaccine"…

The 2-mile long procession paraded two hours through the city, receiving support from its own and enthusiastic people at various points along the way. Citizens demonstrated their support by waving banners with flags and motions along the way. The organizers of the event estimated that the number of participants had been between 80.000 and 100.000.

«Many of those present had suffered from the laws, and all they asked was that in the future, they and their children could be left alone. A large and growing portion of the public was of the opinion that the best way to get rid of smallpox and similar diseases was to use plenty of water, good food, bright and airy houses, making sure the city council kept the streets clean and sewers in good condition». ( "Leicester: sanitation versus vaccination ".

These fearless people wanted to be able to decide for their own health and that of their children and thus fought for self-determination.

«The appalling smallpox mortality in a fully vaccinated and presumably well-protected Leicester in the years 1871-72 had the effect of destroying people's belief in the "protective" vaccine. The result was that the poor as well as the wealthy, the workers and the aristocrats, and the municipal authorities began to refuse the vaccine for their children and themselves. The waste continued until 1890 when, instead of 95%, vaccination reached only about 5% of all newborns»(" Twentieth Century Magazine ", January 16, 1911).

The public reaction culminated in England in the great demonstration of Leicester of 1885.

That same year the municipal council of Leicester, which had put pressure on vaccination through the use of fines and arrests, was replaced by a new council that opposed the mandatory vaccine. Already in 1887 vaccination coverage rates had dropped to 10%.

The "Leicester Method" relied on quarantine for smallpox patients and on the complete disinfection of their homes.

«The method consists of this: as soon as a smallpox case emerges, the doctor and the owner are obliged to declare it immediately in the town hall, under penalty of a penalty. The ambulance in charge of smallpox cases is immediately called by phone, who takes care of all the necessary procedures, and so, in a few hours, the patient is safe in the hospital. The family and the inhabitants of the house are placed in quarantine, in comfortable environments and the house is disinfected from top to bottom. The result is that in all respects the disease is eradicated promptly and completely at a low cost». ("The Times", March 24, 1885).

Although it was clear that the "Leichester Method" was superior to the vaccine, those who strongly advocated the validity of the vaccination believed that the immunity enjoyed by the city of Leicester was temporary and that sooner or later the town would suffer from a vast epidemic smallpox.

Sir D. Corrigan, exponent physician of the 1871 committee said about the Vaccination Act: «an unvaccinated child is like a gunpowder bag that could detonate the whole school and therefore should not be admitted to school unless vaccinated»(" Twentieth Century Magazine ", January 16, 1911).

«Unprotected children will be the ones on whom the scourge will fall most strongly, and the surrounding countryside will suffer the consequences of an epidemic». ("Boston Medical and Surgical Journal", April 16, 1885).

The prophecy that they would eventually be plagued by disaster never came true.

Leicester enjoyed better success against smallpox than other British cities with high vaccination rates. In 1893 smallpox exploded in the well-vaccinated districts of Mold in Flintshire, England, had a death rate 32 times higher than that of Leicester.

Even 30 years after the success of the Leicester experiment, there were those who still thought that in the end a disaster would hit "unprotected fools" who were not in favor of vaccination.

A 1914 article in the New York Times stated:we can predict without fear of making a mistake that a terrible showdown will hit England. It may be fair to say that this is nature's system for eliminating fools who don't have enough common sense to live in modern communities, but among the deceased there will be many who have been misled by men considered experts worthy of faith»(" New York Times ", April 5, 1914).

Smallpox vaccination was stopped almost 100 years later, but the fact that the practice was unnecessary and caused unnecessary suffering and death was never recognized or allowed. Instead, despite all the serious problems it generated, and the lack of evidence that demonstrates its effectiveness, it is still defended as an example in promoting today's faith in vaccines.

«Contrary to popular belief, smallpox has not been eradicated by mass vaccination»(" History Today ", March 1999).

The experiment that lasted more than 60 years not only attested the success of the method, but also showed that scientific thought considered proven could be wrong.

In 1911 Dr. JW Hodge said: "the experience of the unvaccinated Leicester opens people's eyes and represents a thorn in the side for all the vaccinators in the world. Here is a large manufacturing city with a population of almost a quarter of a million inhabitants, which has demonstrated, with the crucial proof of an experience that has lasted for more than a quarter of a century, that an unvaccinated population is far less susceptible to smallpox, and far less afflicted with that disease, since abandoning vaccination, than it was at the time when 95% of newborns were vaccinated and the adult population was vaccinated several times»(" Twentieth Century Magazine ", January 16, 1911).

Based on the book "Diseases, vaccines and the forgotten history ".