FOIA: we have the definitive confirmation that the vaccine damage is systematically hidden 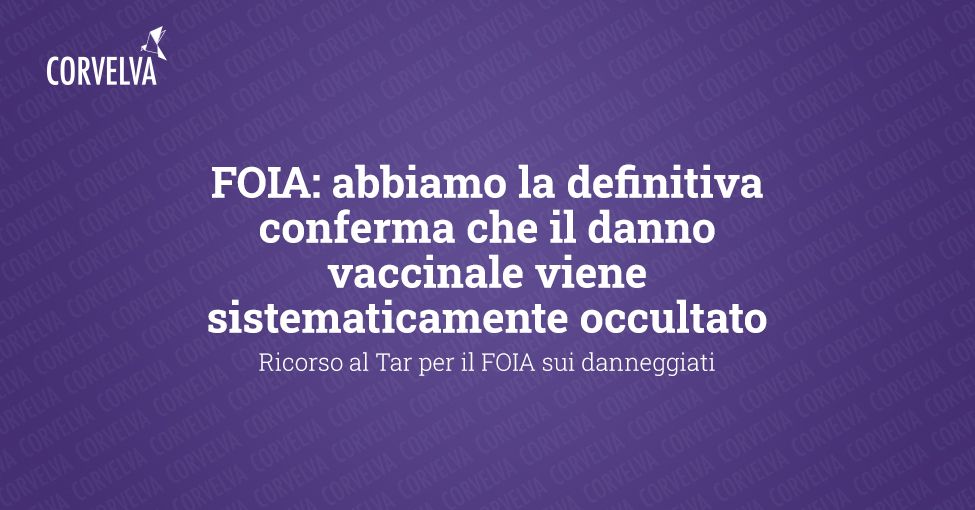 Those who follow us will remember that one of the legal initiatives carried out by Corvelva concerned access to the documents relating to compensation for vaccination damage. The issue has always been particularly close to our hearts, considering that we know with certainty that at least 3 adverse events that led to the death of Venetian children have never been counted or appeared in the Canale Verde reports (reference channel for the evaluation of damage caused by vaccines and for the publication of reports on vaccination safety and adverse events recorded in Veneto). Hence the obsession to investigate the effective functioning of the surveillance system connected to the damage compensation system (here you can retrace the entire story relating to our FOIA requests in the appropriate section of the site).

The news we are giving you today is that the Lazio TAR ultimately rejected our appeal, officially and definitively confirming that the data relating to the compensation L.210 / 92 are not processed by the State. But let's briefly review the facts, because we have been trying to get answers for 3 years, nonexistent we can now say.

It was 2019 when, after having undertaken the first request for access to the documents, in the Veneto Region, we obtained the first response, which certified 40 indemnified subjects in Veneto from 2001 to 2015 with an average of almost 3 indemnified each year, of which 3 after a death (here you can read in detail) and we repeat it, all hidden by the pharmacovigilance system of the Veneto Region, Canale Verde.

Unfortunately, the response obtained was only partial, as the Entity that deals with compensation argued that, in order to provide us with the other data (for example which vaccines caused the damage), they would be forced to "substantially paralyze the proper functioning of the institutional activity of the Compensation Office ".
However, this fact officially denied the region's pharmacovigilance system, Canale Verde, which has always omitted deaths, never reported in periodic reports.
Not satisfied, we decided to make the same request for access to the documents, with the same questions, at the ministry of health, to obtain a national data.

Result: after two years the answer that came to us was that in Italy ONLY 648 subjects were compensated. Objectively it was not enough for us ... 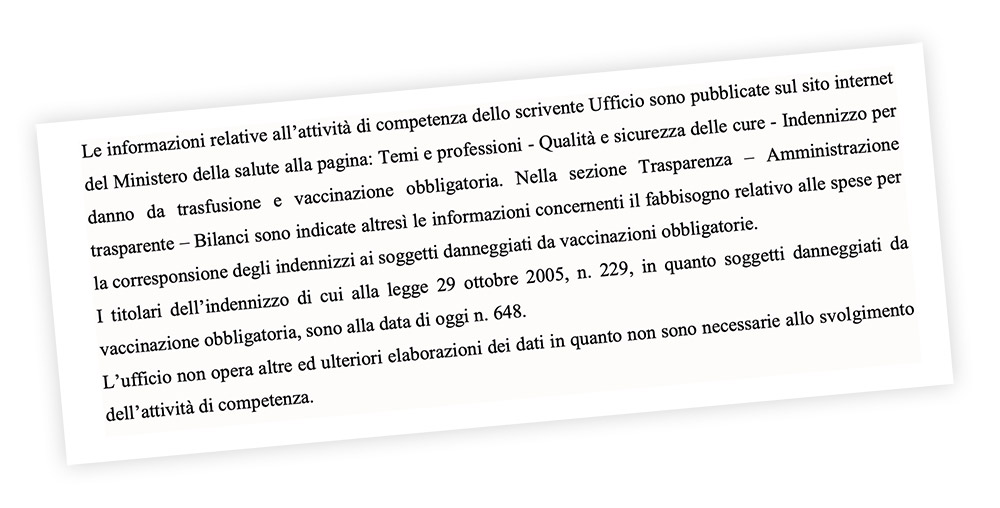 The Ministry of Health communicated that figure to us and claimed not to be able to answer us further but the data, as you can read above, referred to those who had obtained the additional compensation of the Law of 29 October, n. 229, and not the primary recognition of the damage according to Law 210/92. We remind everyone that Law 210/1992 is the law that regulates the recognition of vaccine damage (including damage from blood products), whether caused by irreversible damage or death. The law is very clear, it consists of 8 articles and you can read it Thu. Law 210/1992 is added to law 229/2005 which deals with further compensation in proportion to the extent of the vaccine damage, integrating the Law 210/92, this compensation is additional and must be requested separately (to be clear, who deceased will never have the right to 229, nor will anyone who, perhaps due to lack of knowledge of the law, did not make a subsequent and correct request for fair compensation) therefore the data of the 648 compensated was not and is not exhaustive or representative of the real number of victims recognized by the state !!! Not only that, it is also completely out of statistics and indicates a political and institutional will to deny and conceal vaccine damage.

Evaluate all possible alternatives, we had decided to appeal both to the Commission for Access to Administrative Documents at the Presidency of the Council of Ministers, and to ANAC. Same result. In short, yet another wall of rubber. Have we given up? No. We proceeded with a request for re-examination to the ministry, on the same questions. And here is the official response from the ministry: “The requirements of this Association require a substantial preparation, organization, elaboration and interpretation activity that the administration should carry out specifically to make the requested data available. These data, which, it should be noted, are not directly available: office 4 of the aforementioned Directorate General carries out, in fact, the settlement of indemnities and litigation related to the same and to respond to the request in question should divert resources to the detriment of the 'ordinary liquidation activity, already sufficiently burdened by the execution of the numerous judicial convictions, including compliance convictions by the TARs. "

Take the time to re-read the answer and evaluate its implicit admissions.

Therefore, the responsible office did not know how to answer us because it does not process the data and because it is too overloaded "From the execution of the numerous judicial convictions". From this arose a legitimate question: have they imposed the compulsory vaccination sanctioned by Law 119/2017 without having real data on the risk / benefit ratio ?! And again: does the signing of each informed consent implicitly have in itself a lack of information that does not allow it to be complete in its form?  (here the article "Damaged and concealed: We will use the TAR to find out how many are damaged by vaccines in Italy")

They concluded, gentlemen, by saying that against their decision not to provide the data we could turn to the TAR, and this is what we decided to do.

Today we inform you that the appeal was rejected but at the same time, we obtained the admission of the fact that the ministry of health does not deal in any way with processing the compensation data, nor with knowing what damage the mandatory vaccines have caused over the years, nor what vaccines caused them, nor any other information: these data simply do not exist.

Some more than significant passages of the ruling rejecting the appeal by the TAR:

"In fact, the data and information requested are missing by the recurrent association, since these are elements that would require a preventive activity of identification, research, analysis and elaboration (therefore an ad hoc work by the respective ministerial offices). Data formation activity which, however, as noted in the aforementioned ministerial note (which as a public act is fully authentic up to a complaint of forgery), it has never been initiated by the intimated state administration. "
"In the present case it is peacefully before data not held precisely because they were never processed and therefore trained; "
"so it is not a problem linked to possible difficulties in finding the data but, rather, of the concrete existence of the data itself"
"From a different but complementary perspective, it should also be considered that the request of the applicant association is, on closer inspection, directed not so much to exercise a form of widespread control over the work of the PA (..) but rather to activate a real propulsive instrument of the administrative activity in the sense indicated above. This turns out to be completely inadmissible "(...)
"At the most, a similar research and analysis activity could arise from the most typical control procedures connected to the political activity reserved to the Chambers (eg inquiries on matters of public interest pursuant to Article 82 of the Constitution) and never from a respectable but still simple request for civic access forwarded by an association of citizens such as this one. In conclusion, the appeal, for all the reasons set out above, is unfounded and must be rejected
“The Regional Administrative Court for Lazio (..) definitively ruling on the appeal, as in the proposed epigraph, rejects it. Condemns the applicant association to reimburse the litigation costs, to be quantified in the overall sum of € 2.500 (two thousand five hundred / 00). "

In summary: the data are not there, the data relating to vaccine damages recognized and compensated / compensated do not exist because they are not processed. This despite the fact that there is a law that obliges pediatric vaccinations, despite the fact that on the basis of the vaccination status there are today limitations on personal freedoms and the right to work and we must "be satisfied" with a partial data linked to another law ...

We have obtained certification from the TAR that no one at the Ministry of Health deals with these issues. It is impossible to obtain the data of how many and in total there are actually damaged by vaccines in Italy. Our appeal is rejected because it is inadmissible on our part to claim to have the data specially processed. The data we are looking for does not exist and it is not up to the judge to impose its processing. At the most it should be the Chamber to request it, not us but, which you do not find in the sentence, every time a parliamentarian has approached our Association, we have always asked to proceed with our request ... no one has ever done so.

In this period there was talk of an amendment approved by the Constitutional Affairs Commission of the Senate, to the decree-law of 26 November 2021, n. 172: "For subjects subjected to vaccination obligations pursuant to this decree who have reported, due to vaccination for the prevention of SARS-CoV2 infection, injuries or infirmities from which a permanent impairment of psycho-physical integrity has resulted, the provisions of the law of February 25, 1992, n.210 apply ".
We would like to underline that this compensation concerns only and exclusively irreversible damages, as stated, permanent impairments; moreover, we have been saying this for years, the law 210/92 is a puppet to allow the state to pretend to take care of those who, having followed the recommendations or obligations decided by the institutions, suffer irreversible damage.
In fact, experience and evidence undoubtedly indicate that obtaining recognition, first, and compensation, then, is an improbable undertaking and that the responsibility for proving the damage rests in all respects on families, even from an economic point of view. Furthermore, the ministry of health has always shown that it is willing to do anything so as not to have to pay compensation, or to delay as much as possible the disbursement of the indemnity / compensation, resorting to the cassation. Not surprisingly, in its reply the ministry wrote precisely that the general direction was "burdened by the execution of numerous judicial convictions, including compliance convictions by the TARs. " Well, if there is a compliance sentence from the TAR, it means that a family had to appeal to it because the compensation was not issued. Maybe it was money necessary for the treatment of the injured person but, obviously, these are not things that interest the ministry.