The current situation is particularly serious, and needs your kind attention.

Today, by the end of August, we are very close to having to face the educational situation of our children at an organizational level.

We are not afraid of the fines imposed by the ASL, we will take care of every sanction and make a fierce opposition in every institutional and legal seat; instead, we are concerned with knowing the fate of our children, especially for the 0-6 age group in the near future.

The Ministry of Health has recently published the operating circular "Circular containing first operational indications for the implementation of the decree-law n. 73 of 7 June 2017, converted with amendments by law 31 July 2017, no. 119 "and, as we expected, institutional chaos reigned.

We understand very well the possibility that the individual citizen can successfully interpret the text of the decree or that of the circular, but that instead the institutions of this state and this region do it is not, in our opinion, acceptable.

We then have schools, school managers and principals, left to manage a legislative hot potato, in the absence of explicit and clear directives on what to do on September 11th and we have institutions that already threaten to instruct the master-sheriff to physically PREVENT entry to school of unvaccinated children!

Also noteworthy is the situation in Verona, which mayor has recently published on the Municipality website the interpretation of the Law Decree imposing, for internal organizational purposes only, the obligation to present the necessary documentation for enrollment in nursery and nursery schools. no later than August 21st.

The same, questioned by some of his fellow citizens, replied that as Mayor and Lawyer, he would have enforced the law and, if within the deadline - arbitrarily set by the municipality - the required documentation had not been delivered, the 0- 6 years would have stayed at home.

Now, apart from the absurdity of the comparison between advocacy and legality - as there is no legislative comparison, the fact that a lawyer must have greater respect for the law - the law, is recited in every courtroom, is the same for all and everyone must respect it, DO NOT interpret it according to internal organizational needs.

Not to mention the mayor of Treviso, Manildo, whose ear is really hard on the requests of fellow citizens.

We have been looking for a meeting with him for months, a dialogue, even just to express our doubts, without necessarily having to make any claims.

Our position should at least be accepted, perhaps discussed and perhaps rejected, but at least listened to.

We have a considerable number of interpretations of the Decree Law also within the ASL which - news of these days - reject informative talks, effectively denying our right to be correctly informed about the advantages and disadvantages of vaccinations aiming at the sole purpose of vaccinating, without ifs and buts.

For months we have met first citizens on the whole regional territory and we have met very open ones, people who understood our positions even without fully sharing them; Others have even proposed to disobey this Decree Law, inviting children excluded from schools at their municipality to give lessons and we have those who do not even have time to listen and those who impose invented dates on the delivery of documentation for registration.

Finally there is you President, we have your statements, read in newspaper articles that declare "we will do civil disobedience".

During the meeting that took place in recent months with the Councilor for Health Luca Coletto, concerning the then regional resolution, we had already recognized that there was a very confused situation in Veneto. Interpretations of that regional law also found the same institutional inconsistencies when dropped into reality. Mayors who already declared then that by virtue of your resolution they could exclude children; Schools which, still by virtue of the then resolution, did not accept PARTIALLY vaccinated children; ASL that issued alarming announcements on epidemics not related to NO real cases.

We, highly esteemed President Zaia, urgently need a common line throughout the Veneto region because many of our concerns are contained in the same appeal to the Constitutional Court that you filed. We are not talking about requests contrary to science, we are not asking for the impossible, we are asking you, President Zaia and the Councilor of Health Luca Coletto to help us find answers to a simple question:

"How does the Veneto Region intend to protect the part of citizens that is against a law deemed unconstitutional even by the Region itself?"

The paradox of this decree law is clear.

The institutional inertia of this government has seen the removal of the 330 of the civil code from the Decree Law (fortunately for us), that is the danger of losing parental authority in case of non-fulfillment. This same government then lowered the fines from the ceiling of 7.500 euros to 500 euros. This government has also eliminated the last chance of credibility, if we pay 500 euros, a relatively affordable amount, we become good parents with non-dangerous children (paradoxical absurdity that we intentionally underline).

President Zaia, in offering you our warmest regards and thanking you for having exposed yourself publicly in your opposition to this decree law also before the Constitutional Court, we remind you of the presence of a petition with over 34.000 signatures collected in ten days which is just waiting to be heard. There are 34.000 Venetian parents and they are only a part of the people connected to our Association, parents who see the work of their Veneto Region aimed at a European perspective.

The Venetian parents you have met in these months, and all those they represent, have confidence in the ability of the regional ruling class to raise the political-administrative condition of excellence and democracy.

At the same time as rational as we are, we are parents, concerned about the well-being, social life and education of our children.

We have placed so much trust in the work of the Region, now we need a strong signal against managerial individualisms and closings to dialogue.

Corvelva and over 34.000 Venet Parents 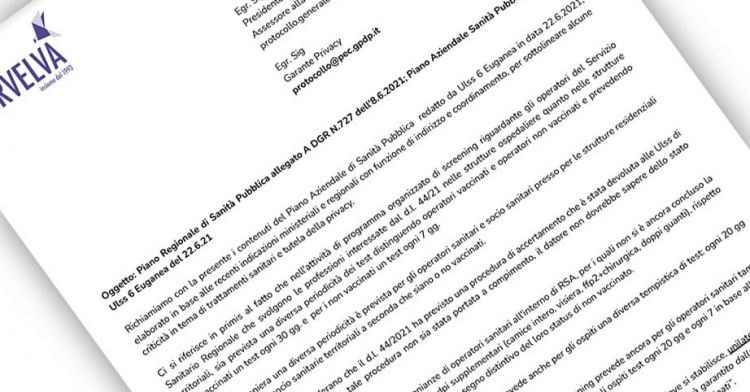