But how many are the damaged and deceased really recognized in Veneto and Italy? Now we have the first data from Veneto 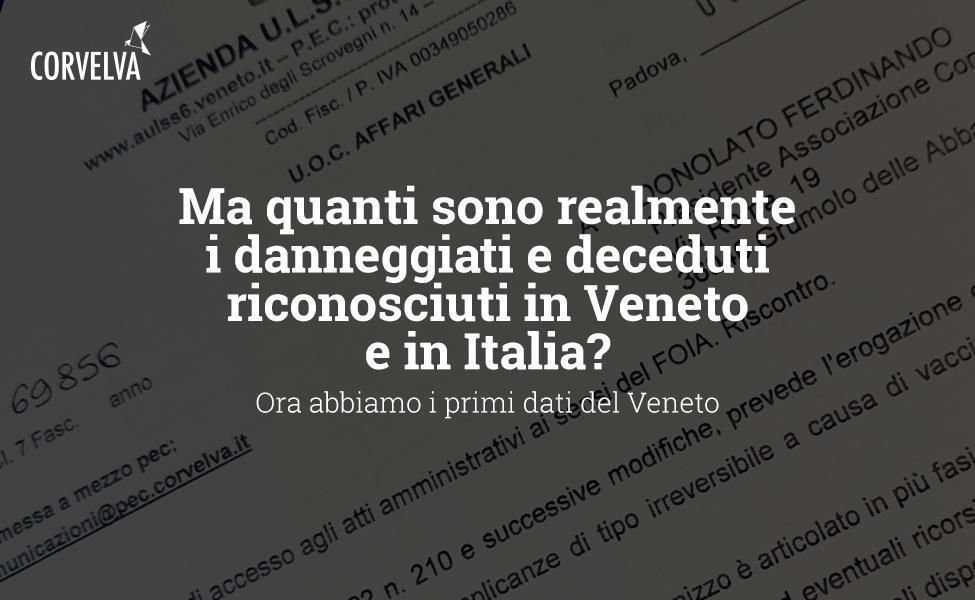 Freedom of Information Act (FOIA) means the law that protects the freedom of information and the right of access to administrative documents. We Italians, who are always ahead of everyone, have seen the FOIA approved by legislative decree of 25 May 2016, n. 97 (Pakistan in 2004 and USA in 1966).

We have, as we said, registered precise questions to both the Veneto Region and the Italian State asking the following:

The data had been specifically requested from all the Venetian institutions, and we knew very well that the compensation of the Law 210/92 passed to the Regions only from 2001 onwards, with a substantial temporal and geographical limitation, therefore the same request is it has also been presented to the Ministry of Health and all the relevant bodies and we assure you that we are ready to bring to court anyone who prevents us from having this data. We will get to know the exact number and report it as it is.

Having said that, despite the limitations described above, therefore from 2001 to 2015, we now know that in the Veneto region there have been 40 compensation of subjects who after the compulsory and / or non-compulsory vaccination have suffered irreversible damage, including 3 deaths.

40 subjects indemnified in Veneto from 2001 to 2015 with an average of almost 3 indemnified each year, of which 3 after a death.

Let us be clear, indemnified means persons who due to vaccinations (compulsory and non-compulsory) have suffered irreversible damage or death, which they reported, who then requested compensation, presenting themselves to CMO and most often faced with a long-standing cause in court, seeing their petitions finally accepted.
As far as we know, from the experience of our association, this is already a very heavy skimming, because the reality is that there are not many families who, faced with an ordeal, and having to face an entire system that goes against it, are able to support this battle, in addition to the daily drama that hit them.

The average annual rate of reporting of serious and related events is equal to 1 case for every 52.631 doses administered (not one in a million, as some professors like to repeat).

A total of 8 patients with distant sequelae, with severe neurological outcomes in 10 cases and mild symptoms in 18, amounted to 1 case out of almost 2 million doses administered.
Always Green Channel, at this point voluntarily omitting, acknowledges that no causally related deaths have been reported. Therefore we lost 3 indemnified deaths on the street and this makes the reliability of the whole Canale Verde report, which we remember to be the most efficient Italian pharmacovigilance system, somewhat doubtful.

Unfortunately, the response obtained is only partial, as the Compensation Authority in Veneto claims that, to provide us with the other data (for example which vaccines have caused the damage), they would be forced to "paralyze substantially the proper functioning of the institutional activity of the Compensation Office ".
We will check whether there are the details to obtain the missing answers: at least we are allowed to say that, for an analysis of the safety profile of these products (vaccines), to have a statistic / evidence of how many and which of these have caused damage such as justify compensation and even death, it would seem to us the minimum, from the Compensation Office.

In the Veneto Region, which has 5 million inhabitants and knowing full well that the figure is underestimated, there is 1 deceased or damaged by vaccine for every 125.000 inhabitants. We always speak of people who have not had an adverse reaction, but of people whose lives have been irreparably destroyed enough to have the strength to fight for years against a system that is structured to hide and limit the recognition of damage. This for the Veneto, partial; soon the Italian data.

Where there is a risk, even if it is minimal (and does not seem minimal), there must be freedom of choice.