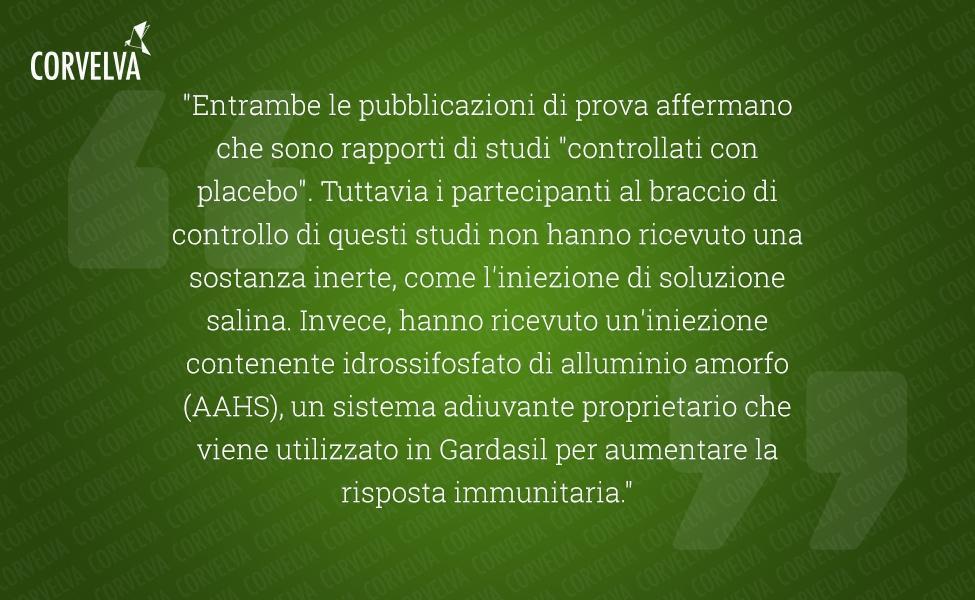 We write to call to action, to re-propose the reporting of multiple studies in Merck's clinical development program for the quadruple human papillomavirus (HPV) vaccine (Gardasil). These tests include:

These highly influential publications (for a total of over 1300 citations, according to the publishers' websites) report the results of two Gardasil pre-marketing clinical trials involving over 15.000 women aged between 15 and 45 years. 1 – 2 These studies were instrumental in supporting the approval of the vaccine.

However these test publications have incompletely reported important methodological details and incorrectly describe the formulation received by the control arm, making it necessary to correct the record.

We intend to restore the written documentation for these tests in accordance with the principles of the RIAT (Restoring Invisible and Abandoned Trials) initiative, of which we are founders. 3

Our motivation to correct records

Both test publications claim that they are "placebo-controlled" study reports. 1 – 2 However the control arm participants of these studies did not receive an inert substance, such as the injection of saline. Instead, received an injection containing amorphous aluminum hydroxyphosphate (AAHS), a proprietary adjuvant system that is used in Gardasil to increase the immune response.

The use of a comparator that was neither an inert substance nor an effective vaccine against another disease requires explanation. The clinical reasons for this decision are unclear, as the test arms do not mimic the real life choice of deciding whether or not to receive the HPV vaccine; this is incompatible with established ethical principles regarding the use of placebo in vaccine studies. 4 However, in at least two key publications, FUTURE II evidence 1 and FUTURE III 2, the reason for using the control containing AAHS was not specified. The registration entries for these tests also lack a logical foundation for selecting this control.

Furthermore, since the AAHS is not inert, the choice of control containing AAHS complicates the interpretation of efficacy and safety results in tests. Although there is no evidence or reason to believe that the AAHS adjuvant could induce efficacy on its own without the participations of the HPV virus (VLP) present in the approved vaccine, the AAHS appears to have a risk profile. 5 For example, in a phase 2 study that tested multiple doses of potential Gardasil formulations (V501-007), the manufacturer included two adjuvant dose arms containing active AAHS, "for appropriate safety comparisons." 6 Concerns about the safety profile of the AAHS the control and the impact on the interpretation of the results are also highlighted by the fact that the FDA directed Merck to conduct a 6-month safety study comparing 3 doses of Gardasil with a placebo containing no aluminum , according to the company's presentation to Japanese regulators. 7 At the time of the approval of Gardasil in the United States in 2006, the V501-018 trial was the only study to compare Gardasil with a non-aluminum placebo, 8 and the FDA medical officer referred to the control used in this trial as "true placebo", 9 in contrast to the control used in other tests.

However, the FUTURE II and FUTURE III study publications do not discuss how the control containing AAHS could influence the interpretation of the results.

We believe that the omission in the journal articles of any motivation for the selection of the control containing AAHS is an incomplete form of reporting (of important methodological details) and that the motivation should be reported. We also believe that the use of the term "placebo" to describe an active comparator such as AAHS incorrectly describes the formulation received by the control arm and constitutes an important error that requires correction. If study participants were told that they could receive "placebo" (widely referred to as referring to an "inactive" substance) 10 – 11 or "inert" 4) without being informed of all the non-inert contents of the control arm injection, this also raises ethical questions about the procedural conduct.

Scope of our restoration

After documenting that these reporting deficiencies were not limited to a single study, but applied to at least two phase 3 studies in the Gardasil trial development program, we decided to systematically correct the record for all Gardasil and Gardasil 9 trials with standalone aluminum containing control arms. We may therefore discover further evidence that needs restoration for the same reason, and we will include this as part of our work.

Our population of potentially eligible studies for restoration is defined as all clinical trials for which we have obtained clinical trial reports (CSRs). At present, this population is limited to data received from the European Medicines Agency (EMA) in response to a request from one of the team members (TJ) for all CSRs for Gardasil and Gardasil 9, submitted in May 2014. The procurement process CSRs were previously described in a study 12 and in an analysis article 13. All studies for which CSR studies of the Gardasil and Gardasil 9 vaccine have been obtained by 1 November 2018 are potentially eligible for inclusion in this restoration.

Following a 2018 ruling in the Canadian Federal Court, we expect to have access to all CSRs for Gardasil and Gardasil 9 and we can use this data from Health Canada instead of - or in addition to - what we have received from EMA, depending on what data is received.

Our participations include the test protocol, the main body of the CSR and the informed consent form used during the recruitment of the participants. We also have correspondence with regulators and manufacturers where the topic has been discussed.

Questions that our restoration aims to answer