Have over 70.000 deaths been prevented by vaccination against three diseases in approximately 75 years? The estimate seems exaggerated 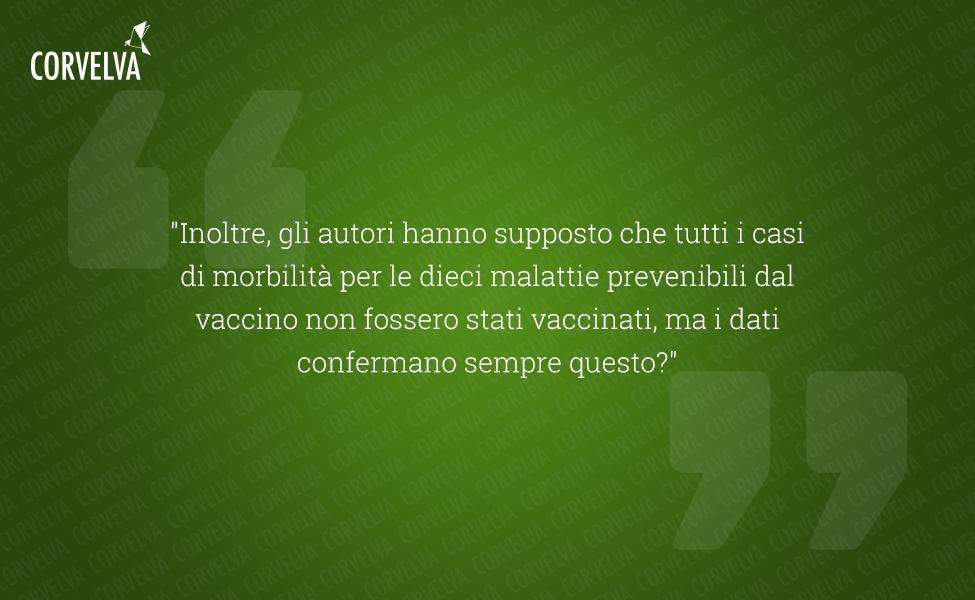 The authors 1 they project the Italian trend before the introduction of the vaccine to the following period, ignoring the influence of other extraordinary factors and circumstances such as world wars.
For tetanus, the peak of World War II (probably attributable to injuries / trauma, poor care and hygiene) distorts the model, projecting an incredible increase in deaths from 1960 to 2015, in the absence of vaccination. Furthermore, advances in surgery, obstetric antisepsis, diagnostic and therapeutic techniques, and urbanization itself are obvious additional contributions to the decline in tetanus mortality.

It is difficult for diphtheria to hypothesize that the difference between mortality rates before and after vaccination programs was attributable only to the vaccine, considering that the parallel collapse of morbidity rates cannot be exclusively due to the vaccine, which essentially protects against disease, without avoiding colonization and transmission. Attributing all the merits to vaccination ignores other factors, first of all antibiotics. Furthermore, being diphtheria very contagious, the model (for this and other contagious diseases) would have had to incorporate the drop in the birth rate. Indeed, the spread of infections across communities depends on contacts between individuals, strongly influenced by the socio-demographic structure of a population 2: the more contacts individuals have (even if only in a family with many closely interconnected members and children), the more vulnerable they are to many infections.

In general, the relative weight of vaccinations in reducing deaths, although undoubtedly, should be balanced by the fact that the decline in mortality had also affected several infectious diseases for which there are no vaccines or mass vaccination programs: malaria, cholera, tuberculosis , typhoid and paratyphoid fever, erysipelas and so on. The decline in mortality should be interpreted in a more structured way, including the influences of improved nutrition in host response (less lethality) to airborne infections, reduced exposure (from better hygiene) to water and foodborne diseases and more effective therapies 3. Without forgetting the effects of reducing birth rates on contacts and transmissions, within families and in the community.

Furthermore, the authors assumed that all cases of morbidity for the ten diseases preventable by the vaccine had not been vaccinated, but does the data always confirm this?
Furthermore, Figure 3B, in which the pertussis morbidity rate is projected to increase in the absence of vaccination, introduced since 1995, should perhaps deserve some explanation.

Finally, the hypothesis, with many data forcing, of over 70.000 deaths prevented by vaccinations in about 75 years, has had a broad scientific and media echo. However, public health decision makers and the general public should be aware that systematic reviews estimate a similar number of deaths for Italy only every year, preventable with simple / easy to implement and low cost measures. Two examples are the increase in daily consumption of nuts up to 20 g [4] (instead of an average of less than 2 g per day) or a daily consumption of whole grains up to 150 g [5].

The authors declare no conflict of interest.