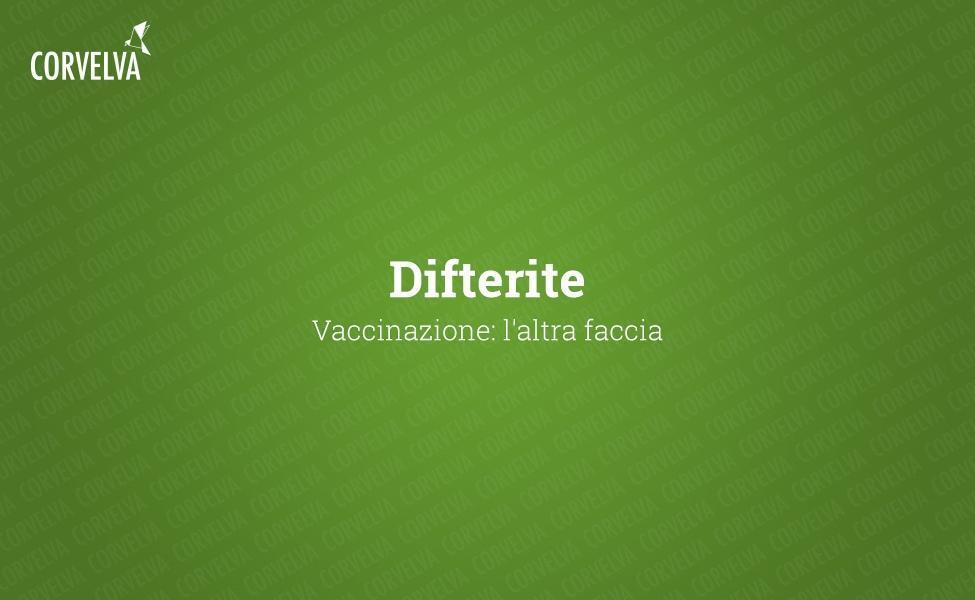 Diphtheria is a bacterial disease. The responsible microorganism is the "Corynebacterium Diphteriae", a few generations ago much feared, and not wrongly: it was one of the most problematic childhood diseases.

Diphtheria (from the Greek diftera, tanned leather or parchment) has been known and described since the first century AD. it is an acute, contagious toxinfectious disease, caused by a beating that, once penetrated into the organism, generally fixates on the airways, causing local manifestations such as redness, edema and fibrinous exudation. The bacterium toxin, on the other hand, enters the circulation and spreads rapidly, causing alterations and general toxic manifestations. Diphtheria toxin has the characteristic of inhibiting the synthesis of tissues causing necrosis, to the benefit of germs and the production of other toxins. The disease has an incubation time of approximately one week. It begins with a decrease in appetite, little fever, enlargement of the submaxillary lymphatic glands, redness of the tonsils, and a serofibrinous whitish exudate that adheres strongly to the mucous membranes. The laryngotracheal localization of diphtheria can cause the so-called "coup" or asphyxiation crises due to occlusion of the lumen of the larynx due to the pseudomembranes.

Did the vaccine defeat diphtheria?
WHO figures speak clearly: where there was not mass vaccination diphtheria decreased the most.

Here is what happened in Berlin (1945/49). After the abandonment of the mandatory vaccination introduced by Hitler, mortality decreased from 74,8 to 1,9 per 100.000 inhabitants. Note that with the end of the war, with all the consequences that this had left, hunger, lack of housing, promiscuity, destruction, diphtheria had to find the suitable tank to proliferate, instead of not vaccinating the disease, it decreased dramatically. Hitler had made the antidipteric vaccine mandatory in Germany and France and the cases of diphtheria in the following three years increased by about 17%. Note that 50% of all people who contract diphtheria have been appropriately vaccinated….

From: Coulter, "Vaccinations, the great attack on the brain and psyche", 1996, p. 346
"We take into consideration the consequences of this unfair law on the basis of the official statistics: the incidence of diphtheria, which in 1940 amounted to 13.795 cases, rose to 1943 in 46.750, to 1944 in 41.500, to 1945 in 45.500. mortality among the vaccinated was two to four times higher than that of the unvaccinated. Between 1940 and 1946 there were 150.000 more cases of diphtheria, compared to the usual number of cases that occurred in the years preceding the introduction of the antidipteric vaccination, and over 15.000 deaths of children killed, indeed it is more accurate to say murdered by anatoxin "

A confirmation of the above can be obtained by reading the graph below: 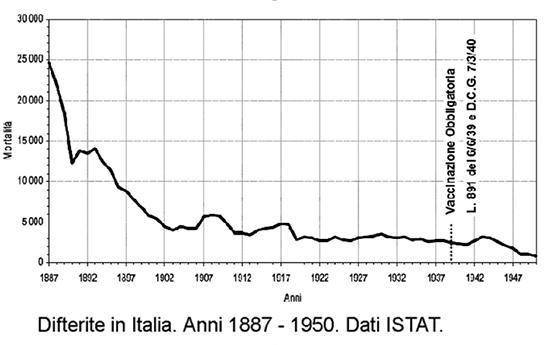 In the following chart, however, we can see how the introduction of vaccination does not seem to have positively influenced the incidence of diphtheria mortality in the United States: 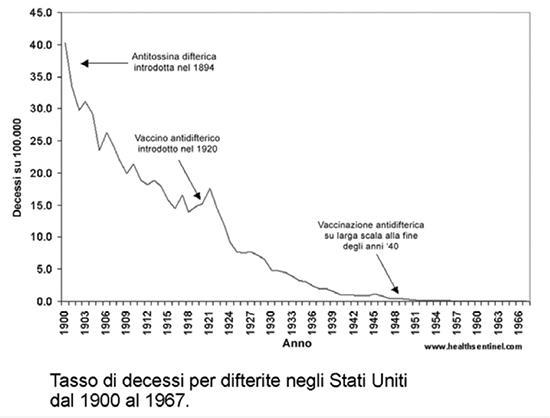 The biology section (Bureau of Biologics Usa) and the FDA, in an official report concluded: "diphtheria toxin is not as effective as an immunizing agent as was believed". The researchers admitted that diphtheria could also arise in vaccinated individuals, and observed that the "duration of toxin-induced immunity remains an open matter."

The booklet entitled "Childhood vaccinations" - information for parents - published by the Veneto region in April 2000 and distributed free of charge (obviously paying with taxpayers' taxes), contains inaccurate and denied data from official statistics, there wonders how public health officials can write and publish certain inaccuracies. For example, on page 11, we report "the last case in childhood occurred in 1991, with a fatal outcome, in an unvaccinated girl". We got Istat data on 1991 deaths caused by bacterial and viral diseases: these data state that neither in 1991, nor in the years immediately preceding or following, there was any death from diphtheria. No death from diphtheria was verified in those years, according to Istat records.

Instead, the circular of the Ministry of Health of 27 August 1994, dealing with the problem of the resurgence of diphtheria in the ex-USSR states, states: "a seroepidemiological investigation conducted .... In 1992, he showed in two-year-olds immune coverage rates for DTP of less than 80% ... and less than 45% in the Moscow area. The following conditions have therefore been hypothesized among the causes of diphtheria upsurge: - low immune coverage among children and young people in many areas of the countries concerned -. The circular then continues by proposing the objective of maintaining high vaccination coverage rates (at least 95%) also in Italy, to avoid recrudescence of the disease.

MA: In the USA, the coverage rates for diphtheria from 1980 to 1985 were (in the age group from 1 to 14 years) on average 73%. In the same period in the USA there were an average of 3 cases of diphtheria / year, and here too no epidemic despite vaccination coverage rates 27% lower than deemed necessary. It is clear that, although with low coverage, epidemic outbreaks start in one country and not in another, there are other variables to consider and therefore to treat in order to arrive at a solution.

Some facts
here you can find the WHO database (Who) on cases reported worldwide: http://apps.who.int/immunization_monitoring/globalsummary/timeseries/tsincidencediphtheria.html

here instead you can see the vaccination coverage rates (3 DTP doses) of the various countries: http://apps.who.int/gho/data/view.main.80200?lang=en

In Spain the vaccination coverage for Diphtheria / Tetanus / Pertussis (3 doses) was 2014% in 97, 2013% in 96, 2010% from 2012 to 97, therefore above the threshold deemed necessary to "guarantee immunity from flock". In the specific case, the Epicenter portal (www.epicentro.iss.it/problemi/difterite/RiflessioniSpagna.asp) announced that: It is an apparently isolated case, statistically insignificant in a country that according to WHO data in 2013 had a vaccination coverage for three doses of DTP of 96%. Furthermore, it is specified that there has been a delay in therapy: the success of the treatment of diphtheria is linked to the rapid administration of the diphtheria antitoxin (DAT) in combination with antibiotics (...) the treatment with DAT started 48 hours after the onset of symptoms systemic toxicity has a limited impact on clinical prognosis. The DAT is part of the WHO list of Essential Drugs, which should be available at all times, in adequate quantities and in appropriate formulations of guaranteed quality. Spain lacked it and leading EU nations such as France and Germany could only offer an expired drug. (…) The initiation of therapy was therefore further delayed, where the DAT should be administered immediately, along with antibiotics, based only on clinical suspicion and without waiting for laboratory confirmation. Let's reflect on the gravity of the thing.

Perhaps (or probably) if the DAT had been available, in at least one unit, not expired, in Spain or at least in a neighboring country, or perhaps if the symptoms of the disease had been diagnosed promptly, that child would still be alive.
If he had been vaccinated, would he have been saved for sure? The answer is not so obvious, as we know that vaccinated is not always the same as immunized, or effectively immunized.

Also interesting this sentence, always from http://www.epicentro.iss.it/problemi/difterite/RiflessioniSpagna.asp: “The Spanish authorities checked the people who had been in contact with the child (family members, classmates, health workers who assisted him during the illness): everyone was given the vaccine and a pharyngeal swab was applied. 8 classmates, in good standing with vaccinations, in which the C. diphtheriae, were placed in isolation and treated with antibiotics. [6] ”this confirms that the bacteria circulate undisturbed even among vaccinated. This is not trivial: inserting this reflection in the scenario that sees the vaccination of all vaccinable subjects, in the name of the defense of the non-vaccinable (immunosuppressed, for example), would change the conclusions considerably. Could the little victim have contracted diphtheria from one of his vaccinated companions?