But how many really are the damaged and deceased recognized in Italy? We are not told 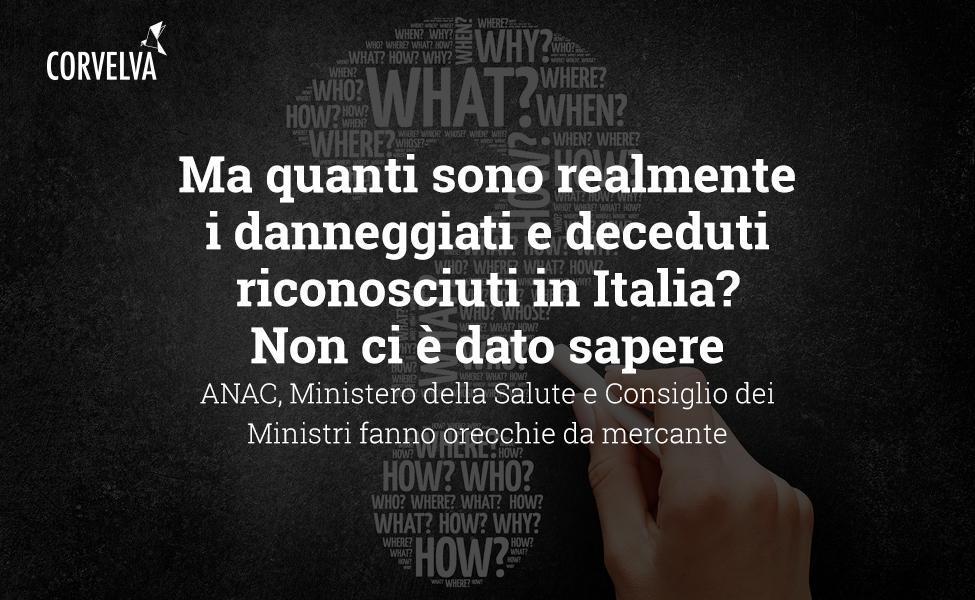 As many of you know, our association has presented one in recent months series of accesses to the documents according to the FOIA (Freedom of Information Act).

It all started with a 2015 parliamentary question by Senator Gian Marco Centinaio to the former Minister Beatrice Lorenzin, who had indicated 9.000 indemnities managed directly by the Ministry of Health plus another 16.000 indemnities to the regions and, as of March 31, 2015 , well 631 beneficiaries of the additional compensation provided for by law 229/05, insofar as they are recognized as being damaged by compulsory vaccinations (609 beneficiaries plus 22 whose position was closed following death).

From here we started with our request for access to the documents according to the FOIA, because the Law 229/05, gave the opportunity to request an annuity only to those damaged by vaccinations who had already received compensation from Law 210/92, but the most interesting question remained unanswered:

"How many vaccine victims have suffered in Italy since the first compensation, Law 210/92, to date? For which vaccines? What pathologies have they reported? How many deaths?"

And here are our requests:

The requests were sent both to the regional institutions of the Veneto region and to the Ministry of Health.

The Veneto Region through its ULSS 6, an entity that has been competent for regional resolution from 2001 to today for the payment of the indemnities recognized by Law 210/92, replied within the terms of the law, and finally we had given notice of a first official figure, 40 subjects indemnified in Veneto from 2001 to 2015 with an average of almost 3 indemnified each year, of which 3 after a death.

The other side, the Ministry of Health, had replied something that defining super-brush is the minimum, therefore, having evaluated all the possible alternatives, we had decided to appeal both to the Commission for Access to Administrative Documents at the Presidency of the Council of Ministers, and to ANAC.

Without going too far into the maze of the law, Art. 5, paragraph 7, Legislative Decree no. 33/2013, provides those who can appeal to the person requesting access to the documents, in the event of partial or total refusal. In simple words, with whom you have to "fight" in case the PA does not respond.

Here's who we asked and what they replied:

Let's analyze better the response of the Prime Minister: being the only ones to have spent on an explanation, however hasty. The Commission maintains that our application mostly contains a request for information and as such is inadmissible, as well as not supported by any reason and therefore not suitable for proving a qualified interest (...).
This gives us a simple and banal question: IF THE REQUEST WAS NOT REASONED, WHY THE VENETO REGION (but also others of which news will follow) REPLY? Maybe, and it's a legitimate question, because THEY HAVE THE ACCURATE AND CONCRETE DATA, and are they therefore able to supply them in a short time?
But then, if this were the motivation that drives the Ministry and the Commission in charge of denying us the data, how could a Minister diminish and / or deny the number of victims? Because this is what happens, Minister Grillo replied with these words, filmed by the cameras, to the questions of a mother: «I know children who died of measles, children who died with the vaccine do not know them. Do you know about it? No. Then don't do this misinformation because people die from measles, people die from meningitis, they don't die from the vaccine, on this thing I don't settle ». These are the words of Grillo.
It would be interesting and also right for the Minister to argue with respect to the aforementioned Venetian data. How is it possible that Minister Grillo DOES NOT KNOW vaccine deaths, when there are 3 recognized in Veneto alone and only in that period of time? How many will be in the rest of Italy? if they can't answer us, how can they safely say they don't exist ???

Unfortunately, these questions fall on deaf ears, and it's a shame, because when you say you want to focus on transparency and correctness of information, these are exactly the behaviors to avoid. It is necessary to be correct and transparent when it comes to the lives of people, of children; it is a duty to give answers and not to hide behind a finger when citizens ask for it.

These are the latest updates from the FOIA front. We inform you that we do not yet publish all the "non-responses" or denials for incompetence, because we reserve the possibility of making further appeal by court and this topic will be discussed first with our lawyers and then with the Corvelva Members, bearing in mind the costs and scenarios.

We give you one last suggestion: when someone says that "there are no vaccine-damaged products", you ask them if they asked the Divine Otelma for advice, because the idea that institutions, bureaucratized to the extreme, is starting to flash in our heads , don't know.