Are the tests, the vaccine tests, or Corvelva the problem? 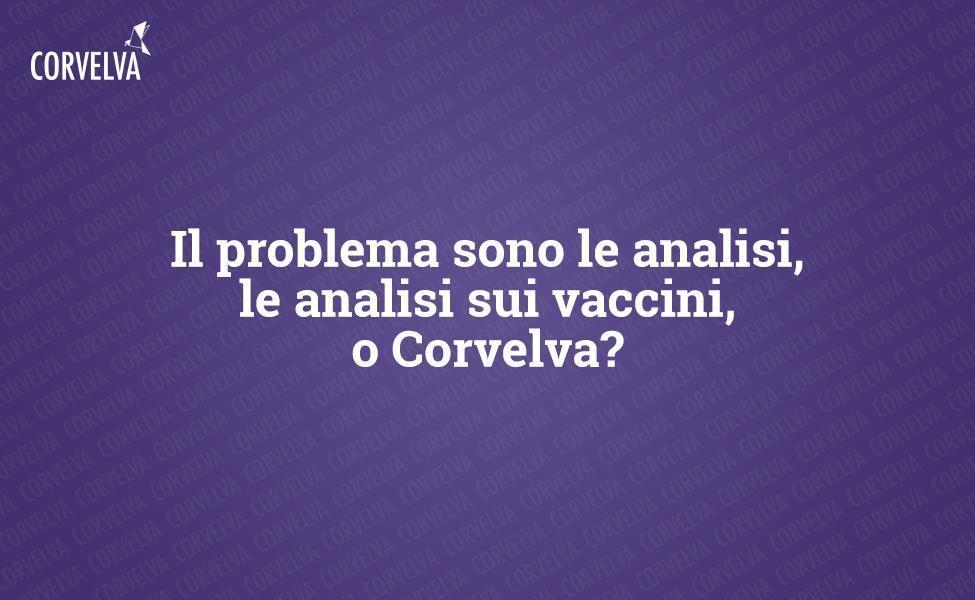 Corvelva's publication of analyzes performed on vaccines (https://goo.gl/uzTWtm) aroused and scandalized some characters of the so-called "scientific community" - as if the researchers who work every day in the laboratories, the doctors or biologists who have doubts and want to settle them, were not part of this "community" - and many of the criticisms rained on our association and on those who considered our scientific research interesting, concern the lack of reliability, peer-reviewed publications, etc.

I want to emphasize that these they are scientific research, as they are reproducible and not theoretical, pure and simple data without any "dietrology", data that come from accredited laboratories that usually work on behalf of third parties without giving anyone any doubts ...

But what I would like to focus on today is: what happens in the other "environments"?

What happens when under the magnifying glass there are not the "sacred" vaccines, but other products of more or less daily use, in the world, products that are in any case subjected to controls as regards some "health risk"?

By doing a short search on the web, interesting results come out on many different topics and / or products: food, cosmetics, etc.
Furthermore, a fact emerges: ASL, SISP, and other entities are involved in a continuous (and encouraged) action of control, analysis and verification of the characteristics that make up various products placed on the market daily, freely purchased by citizens; for example, heavy metals occur in cosmetics, as well as bacterial load and / or the presence of chemical compounds in food products (both for human and animal consumption). I find no trace of similar actions carried out in the control of drugs and vaccines by the same subjects. On the other hand, the web wastes news relating to Nas checks on self-certification of vaccination records in schools!

Often and willingly, however, similar analyzes are commissioned by associations, magazines, entities in various capacities; they are regularly published on the web, also finding, very often, echoes in newspapers or otherwise in media channels.

Isn't that a paradox? In any area, the interest that civil society has in check what is actually put on the market, not only is it considered lawful, indeed it is even perceived as a laudable action (and it is in my opinion). Think about it, someone ridicules an analysis conducted by a "private" on the presence of glyphosate in the main brands of pasta sold in Italy? (https://goo.gl/mNNSTP). Yet a generic "primary European laboratory" is mentioned, no peer-reviewed data are published, there is no trace of certifications. A legitimate complaint by a third party which conducted analyzes and publishes the result, citing brands and types of products analyzed. The health risk is corroborated by several publications on glyphosate toxicity. Same thing we can say about analysis on cosmetics, other foods, etc., where traces of nickel, allergens, or other can be detected. All legitimate analyzes, apparently, for the scientific community!

If the scientific answers are lacking, or are deliberately omitted, we are faced with an outcry that has much in common with a religious process, and very little in common with a scientific approach to the problem: within the vaccines analyzed there are compounds chemical and biological which can pose serious risks to the health of the population! Should we investigate?
Instead, according to the declarations of self-styled professors and bright professors, the problem would lie in the fact that "i no vax" have received credit from a national institution.
For us, however, it is scandalous that none of these superior minds, nor any national institution responsible for safeguarding health, has deemed it appropriate. check what published by Corvelva. The problem is that no one has commented on the implications, on health, of contamination within drugs intended for pediatric administration on healthy children. The problem is that we are faced with alarming data and we humbly asked for explanations in this regard, without receiving any response.

Is this science? We ask that the same analyzes be repeated, we ask to receive the results of the famous controls that are carried out on vaccines in the various phases that pass from production to placing on the market, we ask for a precautionary principle on a biological drug, which in some insights has shown have concrete risk profiles, and does the "scientific community" respond with derision and indignation?

Honestly, all of this has a lot to do with obscurantism, superstition, the fideistic approach. Very very little, indeed nothing to do with the scientific approach.

We look forward to serious reflection on the part of the public, also made up of directly interested consumers, in the meantime we continue to await scientific answers from those who are competent to give them. Is the scientific community able to answer the merits of the results of the analyzes? The institutions are able to verify the real existence of a risk